I've now viewed twelve of the twenty-four first-season episodes of Mannix, so I'm halfway through.  So far, I've very much enjoyed what I've seen.  My memory has not let me down.

The first welcome sight was the iconic opening credit sequence of Mannix.  Iconic in the sense that no-one who has ever watched the show, in either format, has ever forgotten it.

About a decade and a half ago, television producers got the idea of severely truncating their programmes' opening titles and themes, or dispensing with them entirely.  The idea was to keep the audience from hitting the "channel" buttons on their remote controls by immediately engaging it in that week's episode from the start.  A ninety-second title sequence, so the thinking went, would bore the viewer and he would change the channel.

(Which is a perfect example of how technology has changed the attitudes of television programmers.  In the old days, when reliable remote control was rare, the prevailing opinion was the viewer would be too lazy to get out of his chair, unless he really disliked what was coming on, to change the channel.  So there was time for such formalities as clever openings and catchy theme songs.  Since remote control is now the standard, the new paradigm is to do whatever it takes to interest the viewer fast enough to keep him from pressing the button.) 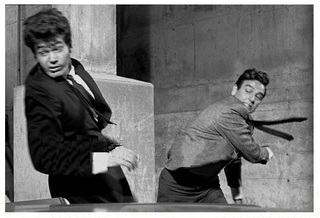 There's a number of things wrong with the no-opening/no-theme approach, and the opening to Mannix shows why.  A good title sequence is, in itself, engaging, exciting, and grabs its audience by immediately placing it in the mood to watch the programme that is about to follow.  If done well, it lingers in the mind long after any particular episode of the show has faded.

The main title to Mannix used a split-screen approach.  It was novel then, not so much now, but it's never been quite copied the way Mannix did it.  For those of you who were living in a cave someplace in the South Pacific during the late '60's and early '70's, here's how it was done.

The screen would use a lattice-like arrangement of smaller inlaid scenes.  Some would merely divide the whole scene into smaller parts---imagine it like putting a tic-tac-toe crosshatch over your television screen.  Others would show the same scene but from different points of view, such as three inlays showing Mannix duking it out with a gunman---one from Mannix's point of view, one from the thug's, and the last from the audience's viewpoint.  Others would simply show different scenes at the same time.  With title cards slipped into a slot here and there.

It was brilliant editing.  While some of the smaller inlay scenes changed over the years, most of them remained throughout the eight seasons, and those stick in one's mind forever.  The very first shot that the viewer saw was one of those.  A long shot of Mannix dashing across a suspension bridge, away from the camera, while being pursued by a speeding car.  Except for down in the right hand corner, a smaller, inlaid scene showed the fleeing Mannix from the front.  Right then, the audience was hooked. The other significant moment in the opener from the second season on was when the screen divided into six different scenes of Mannix in various activities---karate practice, driving a car, burning his hands on hot toast, and so forth---with a letter overlaid on each scene which then came together to spell "Mannix".

As clever as the visuals were, they wouldn't have been as memorable if not for the musical genius of Lalo Schifrin.  Schifrin would be forever known for his theme to Mission: Impossible alone, but that was only one of his exceptional television compositions.  His score for Mannix is equally stunning.  It's a fast-tempo instrumental---unusual for television themes in that it was in triple-time---heavy on the deep brass, with underlying piano accompaniment which comes through best at the carryover.  It's jazz-like but the violins and the heavy tympany give it sophistication, as well.

So perfect was the theme for the show that, while there was minor tinkering with the arrangement over the years, it remained virtually unchanged for its entire eight-year run. For the first season and the Intertect format, there were some significant differences in the visuals.   Joseph Campanella got a co-star billing, of course.  And instead of what would become the familiar six vignettes that spelt out the name of the hero, the camera took lingering looks at the (then) high-tech computers of Intertect, concluding with a punch card drawn from its slot and bearing the title "Mannix".

Mannix relied on a opening teaser, leaving the viewer on a dramatic cliffhanger, then the title sequence rolled.  It never failed to get your blood flowing a little faster.

The first episode of the show was titled "The Name is Mannix".  It was the pilot.  You could tell it was the pilot, but nicely, it didn't stand out as such with the viewer being "over-expositioned" to death.  You could have stuck it anywhere in the first season's run and it wouldn't have been too noticeable.

One of the main reasons for that was in how well prepared the writing was.  Not surprising, given that Mannix was the brainchild of Richard Levinson and William Link, who also created Columbo; and that it was produced by Bruce Geller, the mastermind behind Mission: Impossible.  Unlike most new shows, which take several episodes, or even a whole season, for the cast to gel and to find what works for the characters, Mannix had no growing pains.  The characters were fully formed from the get-go, and Mike Connors and Joseph Campanella meshed perfectly, showing an easy chemistry with each other.

Early in "The Name is Mannix", Lew Wickersham calls Mannix into his office to grouse about Joe's refusal to follow company policy.  This essentially sets the stage for the rest of the season.  As depicted, both men are conscientious and dedicated, but it's clear that Joe disagrees with Wickersham's approach.  From their interaction---it's matter of fact, not contentious---you can tell they have had this discussion many times.

"You're my best man!" insists Wickersham.

The acting by Connors and Campanella is effortlessly layered.  On the surface, Wickersham is irritated by Mannix's flagrant disregard for policy.  And Mannix is wearily annoyed that his boss is bringing it up again. But underneath, even without any dialogue to substantiate it, it's obvious that the two men have a long and deeply felt friendship.  Frankly, Campanella had the tougher acting job, too.  Connors was simply being Mannix, but Campanella's Wickersham had to show ire, yet back it with understanding.

In many ways, the character of Lew Wickersham went far afield of the stereotype---an officious boss who harangues over protocol.  We'll talk more about that later. 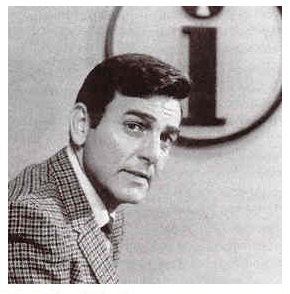 These first dozen episodes also begin to build a picture of Joe Mannix, the man.  Without rolling it up and sticking it in the viewer's eye, Mannix's backstory---the details of his life and skills he has obtained---is introduced.

In fourth-aired episode, “The Many Deaths of Saint Christopher”, we learn that Mannix holds a black belt in karate.  At the time, martial arts were only beginning to rise in popularity in the West, so it added to Joe’s cachet as a capable fighter.  (Interestingly, in most of his fights, he preferred to simply punch it out, street brawler-style.)

In other early episodes, Mannix displays skills as a professional driver and a master lockpick and an expert marksman---all talents one would expect a top-flight investigator to possess.  Again, going to the groundwork that Levinson and Link laid in creating Mannix, these abilities were not just seen one time, but referred to often, even after the format changed.

In a couple of episodes, particularly “The Cost of a Vacation”, we are told that, sometime in his past, Mannix fought on “the side of the angels” in a South American revolution.  In this first handful of episodes, it is hinted that Mannix participated in a number of ventures and occupations before becoming a private detective.  Frequently, he seeks out old friends for information.  When they reminisce about the old days, these pals are usually surprised to learn that Joe is a P.I., now.  Again, many of these hints are fleshed out in later seasons.

There is a particularly interesting sequence in the tenth episode, “Coffin for a Clown”.  While seeking information on a man marked for death, Joe seeks out more old acquaintances, a fence and his henchman, both from Armenia.  In a lengthy scene---without subtitles---Mannix speaks to them in Armenian.  This is the first acknowledgment of Mannix’s Armenian heritage (reflecting Mike Connors' own ancestry; he was born Krekor Ohanian).  This, too, will be amplified further in later seasons. (Actually, there is an earlier nod to it.  In the opening sequence, the title card which reads “Mike Connors is . . . “ has a backdrop of red, blue, and orange---the colours of the Armenian flag.)

Mostly, it’s Mannix’s personality we discover.  He is affable, friendly, relatively easy going.  Unless he is pushed; then he turns into a tiger.  He trusts his own experience, knowledge, and instincts over anything, or anyone, else.  He’s an excellent judge of character and can smell a lie even before someone utters it.

Most of all, he has integrity in his profession.  Once hired, he represents the client’s interests above all else, including that of Intertect.  Unless that client turns out to be duplicitous.  When assigned a job, he does it to the best of his ability, regardless of whose noses get put out of joint.  In “Skid Marks on a Dry Run”, the second episode aired, Intertect is hired by a prominent businessman who is considering a run for the state governorship.  He wants Intertect to dig up any dirt on him, to discover whatever it can to smear him, on the theory that, if Intertect can’t find anything bad on him, his political opponents won’t, either.

Wickersham assigns Mannix to the case.  The businessman, Pierson, gives Joe carte blanche to rummage though his past anywhere he likes.  Except he forbids Mannix from talking to his wife; she is not to be bothered.  So, naturally, the first person Mannix questions is Mrs. Pierson.  When Mr. Pierson finds out, he calls Wickersham and raises holy hell.  Lew, in turn, calls Mannix on the carpet.

“He told you to stay away from his wife!” barks Lew.  “Look, while you’re working for him, will you at least try to follow his orders?”

“Will the opposition follow his orders?” Joe points out, logically.

You all know what a continuity-lover I am, and I was pleased to see that Mannix paid attention to small details, almost casually.  You didn’t often see the other employees at Intertect, except as background players.  And when you did, it wasn’t with enough frequency to even consider them recurring rôles.  But when they did pop up, their characters always had the same names and were played by the same actors.  That same consistency was even applied to the unseen “Lieutenant Jacobsen”, the LAPD homicide detective Wickersham frequently called to collect the corpses Mannix left behind in his wake.

In sum, nothing about Mannix the man changed when the show moved into the new format.  The subsequent seasons merely built upon the foundation laid in the first year.  However, something was lost when the character of Lew Wickersham was turned out.  I can tell that already.  But I’ll speak more to it after I have seen a few more episodes.