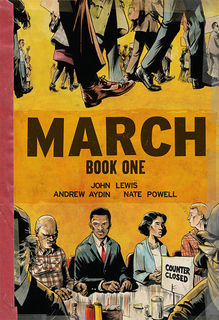 March tells the story of Congressman John Lewis, from his childhood in rural Alabama, to his key role in the Civil Rights movement, and finally his career in Congress. This book is the first of three, but because it moves around in time it touches on several periods in Lewis's life. The story begins on the Edmund Pettus Bridge during the march from Selma to Montgomery on March 7, 1965. The confrontation between the marchers and state troopers became known as "Bloody Sunday." It quickly jumps to Washington, D.C. in 2009 on the day of President Obama's inauguration, showing us how far Lewis had come in the intervening years. As he shows some visitors around his office he tells them about his childhood on a farm.

So we get a broad chronological range in the first 50 pages or so. I especially enjoyed Lewis's memories of caring for the family chickens. A trip up north to Buffalo with his uncle broadened Lewis's horizons considerably, and his affinity for education took him to college. He hears Dr. Martin Luther King, Jr. on the radio, learns of the murder of Emmett Till, and the arrest of Rosa Parks. He was inspired, which eventually resulted in the 1960 non-violent lunch counter sit-ins in Nashville, the first civil rights actions led by Lewis.

While many readers could be expected to know the broad outlines of the story here--especially the large public civil rights actions--Lewis's story gives this history a rich personal background. Like all good memoirs the story thrives on the intersection between the public and private, the way the personal details relate to the broad sweep of historical events. It's a fascinating story, which Powell translates into visual terms very effectively. I look forward to the succeeding installments.