Marvel Comics had a bad year, but there are still a lot of good books to read

Marvel Comics rolled out a major publishing initiative last September called “Legacy.” While it clearly didn’t succeed at everything they hoped, the results are worth exploring for fans of Marvel comics, movies and TV shows.

Marvel needed some good news in 2017, in what proved to be a terrible, horrible, no good, very bad year. The Hollywood Reporter even wrote an article titled “2017: The Year Almost Everything Went Wrong for Marvel Comics.” It’s an article well worth reading in its entirety, but some of the highlights included Marvel bungling its relationship with the guy who created Thanos, the Big Bad in Infinity War; a storyline featuring a fascist Captain America that outraged fans; hiring a new Editor-In-Chief who had to admit to defrauding the company in his youth; a retailer rebellion over expensive lenticular covers that didn’t work; and a senior vice president blaming poor sales on “diversity.”

Yes, virtually all of these injuries were self-inflicted. Arch-rival DC Comics laughed and laughed, while inviting disaffected Marvel readers into its Batcave.

Speaking of which, Marvel finished the year with the largest market share – 36.36 percent vs. DC’s 30.06 percent (with smaller publishers fighting over the table scraps). However, industry journal ICv2.com noted that Marvel had “less than half the lead Marvel had two years ago, when it topped DC by around 13 share points.” 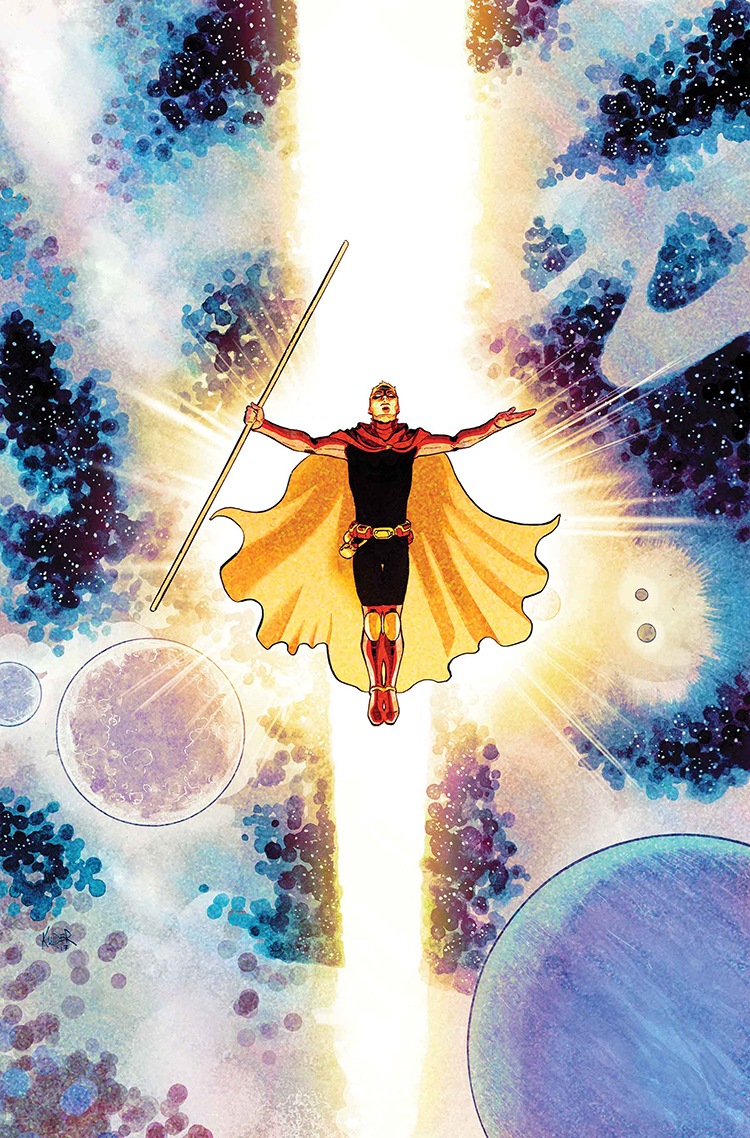 Infinity Countdown: Adam Warlock #1 returns a cosmic character from the dead – and on the search for the Infinity Stones that will be prominent in the movie Avengers: Infinity War.

Part of DC’s success came from a 2011 initiative called “Rebirth,” which re-launched their entire superhero line more or less from the beginning. Stripping their iconic characters of years of baggage proved to be a winner, with even lesser titles like Aquaman and Batgirl leaping up the sales charts.

Marvel wanted to do the same. Hence, “Legacy,” which marvel.com says was supposed to “usher in the dramatic return of dozens of its most beloved heroes, villains, teams and artifacts in bold stories that will begin the next chapter of the Marvel Universe.”

In other words, copying Rebirth.

Sadly, “Legacy” failed to do that. In fact, it didn’t really do much, with one retailer (who prefers to go nameless) calling it “a meaningless label.”

As evidence, one should note that 18 titles that had “Legacy” slapped across the cover since September have been canceled, will be canceled in the next few months or are probably already canceled with no notice. It’s hard to imagine that was part of the plan.

Not that 18 dead soldiers is a critical loss for the largest comics publisher in North America. Marvel published more than 40 ongoing titles in January, along with 14 miniseries and two annuals. Those numbers are actually on the conservative side, since some of the canceled titles are still straggling out, replacement series are in the offing and some books are published more than once a month.

So the House of Ideas, while wounded, is still the super-gorilla in the room. And Marvel being Marvel, even when they’re at their worst, some of their titles are still extremely good – especially if you like Marvel movies or TV shows. For example: Avengers #681 is part of the weekly “No Surrender” story, which stars Voyager (center) an Avenger who didn’t exist until recently, but everyone mysteriously remembers her as a founding member.

AVENGER ASSEMBLE: To prepare for May’s Avengers: Infinity War, check out a series of miniseries under the umbrella “Infinity Countdown,” which is just beginning. Already in progress is the ongoing “Thanos,” which pits the Mad Titan against his worst foe: his future self. And don’t overlook the aptly-named “Infinity War: Prelude,” a new miniseries set in the Marvel Cinematic Universe that leads up to the movie.

Meanwhile, Avengers is currently being published every week as part of a three-month event called “No Surrender.” Marvel promises the end to this story, in which the Earth itself is kidnapped, will change the team forever!

Well, we’ve heard that before, and there’s no reason to believe it now. But “No Surrender” is a terrific story so far, with twists that are hard to predict, and cosmic stakes.

CLAWS OF THE CAT: Acclaimed writer Ta-Nehisi Coates continues his epic run on Black Panther, which is required reading for the Feb. 16 movie – and on general principle. Meanwhile, a Rise of the Black Panther miniseries, also by Coates, is filling in some blanks in the Panther’s origin. 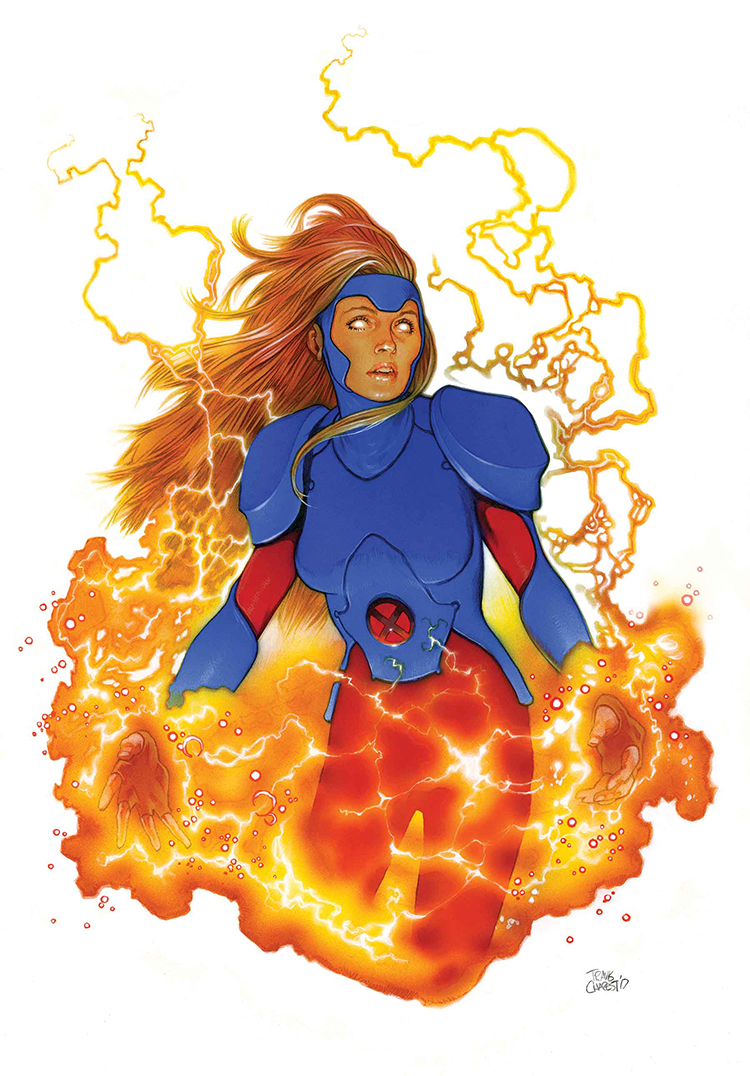 FROM THE ASHES: The five-issue Phoenix Resurrection miniseries, which ran weekly in January, brought Jean Grey and the Phoenix players back to prominence in time for the November X-movie. It will be succeeded by X-Men Red, an ongoing title starring Jean as an X-team leader, adding to a quality X-line that already includes two other recommended books, X-Men Blue and X-Men Gold. That’s plenty of X-citement to hold us until the Dark Phoenix premiere.

MERC WITH A MOUTH: With Deadpool 2 arriving in May, Marvel hasn’t been shy about highlighting its star – and its co-star, the time-traveling Soldier with a Snarl named Cable. Spider-Man/Deadpool is far better than it deserves to be, with several LOL moments per issue. Despicable Deadpool, with Wade Wilson returning to his murderous ways (temporarily, one assumes), climaxes in May. And Cable himself now has his first title in years, which should re-establish his particulars for the movie-curious.

PSEUDO-SPIDER-MAN: Miles Morales, the alternate-Earth web-slinger who will star in the animated film Into the Spider-Verse in December, stars in his own title, Spider-Man, and also the sunny super-teen book “Champions.” If you’re looking forward to Sony’s Spidey-less Venom in October, there’s a monthly book starring the space-born symbiote.

A LONG, LONG TIME AGO: Marvel’s movie-related books aren’t restricted to the MCU – it currently publishes four “Star Wars” titles. If you’re looking forward to Solo: A Star Wars Story in May, you could do worse than read the Star Wars monthly, or the books starring Darth Vader, Poe Dameron and Doctor Aphra. They’re not only high quality, but as movie-accurate as the Disney-owned publisher can make them.

SMALL SCREEN: Ready yourself for the next Netflix series with Daredevil, featuring The Kingpin as mayor of New York. (The book works both as adventure story, and as commentary on real-world politics.) The new ongoing Runaways, featuring the same gang as the Hulu show, should fill the void between seasons. David Haller, the powerful but imbalanced mutant on Fox’s Legion, has a five-issue miniseries that began in January. Unbeatable Squirrel Girl is a charming book about an eccentric young lady who will star in New Warriors, a show appearing somewhere on cable this year.

JUST COMICS: Obviously, not all of Marvel’s books are connected to Marvel or TV shows, and some of them are pretty good reads. Ms. Marvel stars a young Inhuman who is this generation’s Peter Parker – a lovable Pakistani-American girl who suffers the slings and arrows of adolescence in a New Jersey high school. Marvel Two-In-One, written and drawn by the superstar team of writer Chip Zdarsky and artist Jim Cheung, features The Thing and Human Torch, and captures some of the magic of the much-missed Fantastic Four title.

Doctor Strange has been a fantastic read since its latest reboot in 2015, with a little more Benedict Cumberbatch peeking through every issue. And don’t skip Spider-Gwen, about a Gwen Stacy on an alternate Earth where she received spider-powers and Peter Parker died instead.

That’s a lot of good reads, whether “Legacy” worked or not. If Marvel can just stop shooting itself in the foot, 2018 might be a better year.

Regarding that piece from The Hollywood Reporter (“2017: The Year Almost Everything Went Wrong for Marvel Comics.”) ... wow. I didn't know half of this stuff!

Jeff of Earth-J replied to Steve W's discussion A Cover a Day
"A mere 1000 issues? What a newcomer! As I pointed out on the "Three of a kind"…"
9 minutes ago