Marvel's December launches too much of a good thing

Sometimes there can be too much of a good thing.

That’s a theme that stands out in the third month of the Marvel Comics reboot, as 13 first issues of ongoing titles were released in December. That brings the total of new titles to 51 since North America’s largest comics publisher began re-inventing itself in November. 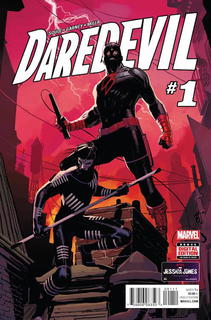 * Daredevil #1 continues the renaissance of the Man Without Fear, who once took the grim-n-gritty of the 1980s so far that one wondered why Matt Murdock – who had been outed as Daredevil, had several girlfriends killed and was disbarred a couple of times –  didn’t just go ahead and end it all. Fortunately, fan favorite writer Mark Waid took Daredevil to San Francisco, upped the cheery quotient and reminded Matt (and the reader) just how much fun being DD would be.

Another fan favorite writer, Charles Soule, is taking over with this first issue and immediately put his own stamp on the feature. He’s returned Murdock to New York (where he works best), converted him to a prosecutor (more thematically consistent than being a defense attorney), retained the friction between Matt and best friend Foggy Nelson (as seen on Marvel’s Daredevil on Netflix) and given ol’ Hornhead a sidekick of sorts. OK, that last is kinda odd – sidekicks have been out of fashion since the 1960s – but let’s give Soule time to play out that string.

* I’ve never been much of a Hulk fan – in my youth, “strong and dumb” usually translated to “bully who liked to hit me” – but Greg Pak might make me a believer. His Totally Awesome Hulk #1 features teen genius Amadeus Cho as the Emerald Behemoth’s alter ego (somehow) with no Bruce Banner to be seen. That mystery will eventually be resolved, but right now we have a Hulk who is not only smart, but also a teen – meaning hormone-driven and likely to make bad judgments. This Hulk will still be a menace, but mostly in the way all teenagers are.

* Red Wolf cannot possibly work. This new title takes a Cheyenne brave from the 1870s who had made himself a sheriff in the white man’s world and transports him to 2016. That makes Wolf doubly a fish out of water, which is a fascinating premise. But the reason few Native Americans appear in comics any more is because they’re too politically charged – almost every group on every side of Native American politics is going to find something to complain about. But I like Red Wolf, and maybe sheer quality can silence the nay-sayers.

OK, now the not-so-good stuff. Problem No. One: the “Batgirlization” of too many titles.

For those who don’t read comics regularly – and, honestly, shame on you – DC Comics made a surprise discovery when it experimented with the mediocre-selling Batgirl a couple of years ago. They took the character, who was the typical grim-n-gritty vigilante with lots of serious, grown-up problems, and regressed her. They put her in college, had her whip up a home-made costume, inflicted on her young adult problems of the romantic and social sort and surrounded her with friends and lovers of various hues, nationalities and sexualities. That experience, presumably, is more in line with what college is like these days. And the art, to reflect this new tone, was cartooned-up quite a bit.

Batgirl became fun, fresh and sassy – and readers responded. Other creators started adopting elements of the Dominoed Daredoll to make their own books as popular. Hence, “Batgirlization.”

A few new Marvel books have already gone Full Batgirl, notably Unbeatable Squirrel Girl. But December featured three more such books, and that’s a bit too much treacle for one sitting. 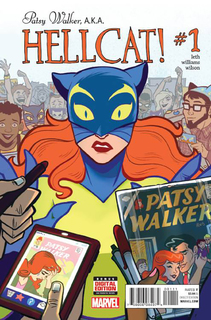 Patsy Walker a.k.a. Hellcat has an excuse to be a bit silly, because the character always has been. Introduced in 1944, Patsy and her friends (especially frenemy Hedy Wolfe) were the stars of a number of teen humor books that lasted until 1967, although in 1964 Patsy Walker and Patsy and Hedy transformed into young career-girl romance books.

Patsy and Hedy showed up at the wedding of Reed and Sue Richards of the Fantastic Four in 1965, and ensuing appearances in the Marvel Universe established that all of their previous comic book appearances were fictional, written by Patsy’s mother. (This conceit was picked up for the Patsy Walker character in Marvel’s Jessica Jones on Netflix.) This being the Marvel Universe, it was only natural that Patsy eventually became a superhero, the feline and sorcery-detecting Hellcat (in 1976).

Despite being immersed in the grim-n-gritty of the superhero universe – and at different  times being A) married to the literal son of Satan and B) dead – Patsy has always maintained her happy-go-lucky and eternally optimistic personality. That makes her a pretty good candidate for being Batgirlized.

In this case I can accept the cartoony art, the sitcom-style gay best friend (actually two of them) and the chirpy dialogue. It’s when that same approach  is extended to two more books – Starbrand and Nightmask and Gwenpool, of which I shall say no more – that it wears out its welcome.

“Too much of a good thing” applies to three more books as well: 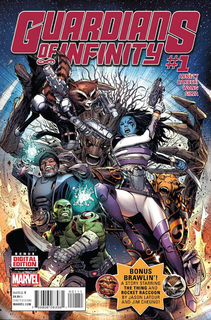 * For a couple of years now, Marvel has been de-emphasizing its mutants in favor of a lesser-known, less popular group that is very similar called The Inhumans (See: Marvel’s Agents of S.H.I.E.L.D. on ABC). The likely reason is that Twentieth Century Fox has the movie rights to all things X-Men. So there are already several Inhumans books filling the publishing schedule where X-books used to be.

That would be well and good, except that there’s a reason that the Inhumans – introduced only two years after the X-Men – have been less successful than Marvel’s merry mutants. The X-books have popular, interesting, well-developed characters like Wolverine, Storm, Cyclops and Magneto, plus a cast of thousands. The Inhumans have … well, if I named any, you wouldn’t know them. So I don’t expect All-New Inhumans, which launched in December, to last very long. It stars a lesser Inhuman named Crystal (hey, she used to date the Human Torch!) and a bunch of forgettable nobodies invented expressly for this first issue.

* Thinking about the Inhumans (which I try not to do) the one title that I think could potentially be interesting would be a Lockjaw solo book, as he's easily the most likeable of the group. Especially paired with a good, whimsical artist and writer.

* Seriously, you're not going to beat Lee/Ditko/Romita Spider-Man, so just stop.

* Yes, Guardians of the Galaxy is hot, but that doesn't mean adding all of these additional characters is going to make them hot as well.

* I'm digging Patsy Walker aka Hellcat myself, but that's because it works for the character. And wow, giving Batgirl a supporting cast and a life made her more interesting. Who'dve thunk that?

Other than the ones on TV, the only Inhuman I'm dealing with is Kamala Khan, and she's pretty great.

Inhumans? Well...there's that really ugly woman that got turned into a cocoon then hatched into a butterfly lady. But I think even to this day only Medusa and Crystal have ever gotten any sort of character development. We know more about Maximus than Gorgon or Karnak.

If Disney got the mutants back, would most of these characters sink back into obscurity? Would the mutants turned into inhumans (often with new powers) change back into mutants? Would they keep their new powers or get their old powers back?

In the words of Bullwinkle J. Moose: "This time for sure!"

Maybe he really does need another hat?

I'm really kinda dumbfounded how the mutants have been so quickly and savagely shoved off the stage. The X-books were Marvel's strongest sellers for about 20 years, and still had titles in double figures after they were eclipsed by the success of the Avengers. Suddenly they're virtually gone -- they have, what, 3-4 books? -- and Inhumans are all over the place. I can't believe Inhumans sell as well, so it seems like Marvel is just hurting itself in order to (mildly) hurt Twentieth Century Fox.

That doesn't seem very smart. But then, I'm on the outside looking in, so what do I know?

Seems like this is hurting fans that want to see more mutants and the return of the Fantastic Four far more than it's going to hurt Fox. Also if Fox was thinking of making a deal to let Marvel have the FF back, that's going to make them change their minds.

Of course, this was the best thing that ever happened to the Avengers, who were being pretty near forgotten for years while Marvel pushed the mutants. Would Iron Man or Thor have gotten any movies by now if Disney had the X-Men film rights?

I'd be surprised if this tactic is hurting Fox at all since most of the people who go to superhero movies don't know or care if comic books exist for these characters. Perlmutter had better be careful. If stockholders think comic sales are down they could pin it on his idea of dumping the mutants.

Richard Willis replied to Steve W's discussion A Cover a Day
"Also for the 13th, a scary pre-Code issue"
14 minutes ago

Lee Houston, Junior replied to Steve W's discussion A Cover a Day
"Phillip: For what it's worth I got the joke but were the Tell A Tale books akin to the Big…"
22 minutes ago

Philip Portelli replied to Steve W's discussion A Cover a Day
"I know that this isn't a comic but I had to add it. Had to, I say!"
1 hour ago

The Baron replied to The Baron's discussion The List of Super-Hero Teams
"Second-guessing myself a bit, here:  Should hero "organizations"  that…"
4 hours ago

The Baron replied to The Baron's discussion The List of Super-Hero Teams
"Will add."
4 hours ago

The Baron replied to The Baron's discussion The List of Super-Hero Teams
"You didn't see the Freshmen bcause I'd never heard of them, but I will add them. As…"
4 hours ago