As of last week, the seven major TV shows based on comics characters have all gone on hiatus until January. Each show ended its 2015 run with big reveals and cliffhangers – some good, some bad. But all worthy of discussion.

CLIFFHANGER: When Director Coulson (Clark Gregg) finally put an end to rabid dog Grant Ward (Brett Dalton), most of me felt relieved, but a small part regretted that a villain who was so much fun to hate was dead. Apparently I needn’t have worried, because the final scene revealed that Ward’s body is now inhabited by the evil alien from the world that inspired Hydra.

FANBOY SPECULATION: This means two things. One: More Grant Ward! Yeah, he’s possessed by an evil alien. But if the alien is defeated – which he will be, eventually -- might Ward not return to bedevil our merry agents? And two: We won’t have to go back to the alien planet. Which was cool-looking, I admit! But it stretched the F/X budget, our heroes’ resources and the audience’s attention span. Let’s stay on Earth, where there are already enough simultaneous developments to keep us busy. 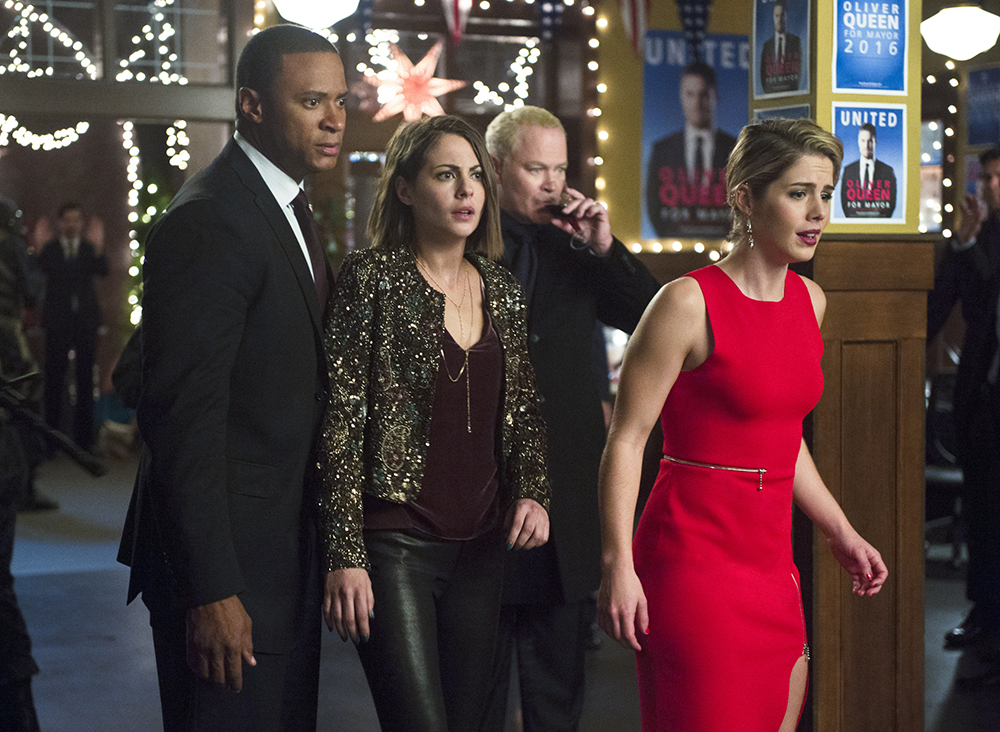 CLIFFHANGER: Felicity Smoak (Emily Bett Rickards), after accepting a proposal of marriage from Oliver Queen (Stephen Arnett), appears to have been killed. Also, bad guy Damien Darhk (Neil McDonough) is revealed to have a family.

FANBOY SPECULATION: “Appears” is the key word, because the show can’t spare what is probably its most popular character. She’ll be saved, but the marriage will once again be postponed, as superhero marriages always are. Meanwhile, Team Arrow is invested personally in taking down Darhk, a villain who now has an Achilles’ heel aching to be discovered. 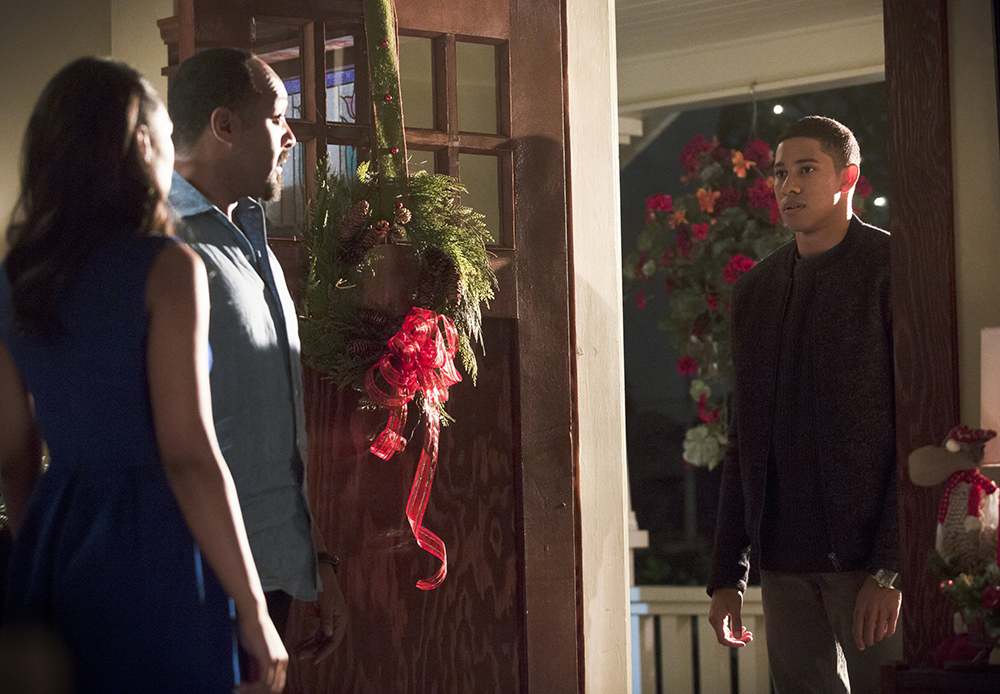 CLIFFHANGER: Wally West (Keiynan Lonsdale) arrives, and Harrison Wells of Earth-2 (Tom Cavanagh) makes a deal with the devil to save his daughter, Jesse (Violett Beane).

FANBOY SPECULATION: In the comics, Wally West becomes Kid Flash, the Scarlet Speedster’s sidekick, so look for our new arrival to somehow, someway, get super-speed. (Although, since it’s not 1959, he probably won’t be called “Kid Flash.”) Oh, and Wells’ daughter has already been referred to by the nickname Jesse Quick, another speedster from the comics, so look for her to speed up as well.

As to Wells’ deal with the big bad, Zoom – well, nobody on the show likes Wells anyway, so they won’t be too surprised.

FANBOY SPECULATION: A couple of regulars on my message board (captaincomics.ning.com) have dropped “Gotham” as too unrealistic. They single out in particular a scene where a cop was killed at the station house with no repercussions.

I respect their opinions. And I’m sympathetic, because I understand the rules of fantasy, which stipulate that an audience may only be asked to suspend disbelief for certain necessities, but otherwise the world must operate normally. That is to say, we will allow ourselves to believe Supergirl can fly (because she’s an alien) but for all other characters, the laws of physics must apply.

So, yes, on a typical police procedural, a murdered police officer would have dramatic results. But this is not a typical police procedural. Rather than the dead cop being a bug, I consider it a feature. Namely, that this is a town so corrupt, so blasé about the deaths of cops, so bereft of moral norms, that even a straight arrow like James Gordon has to bend the rules to stay above water. The dead cop isn’t an anomaly – it’s part of the bigger picture.

The result is a very surprising and dangerous show that not even comics fans can predict. This Gordon may become commissioner of police, and this Selina Kyle may become Catwoman, and this Bruce Wayne may become Batman. But they cannot be the characters as we know them in the comics, by virtue of crimes  they have committed or forbidden knowledge they have attained. So even comics fans are guessing as to what happens next. And that’s exciting.

Well, we can guess one thing: In the comics, the order of St. Dumas (of which Galavan was a member) burps up a formidable armored warrior named Azrael. I sure wouldn’t be surprised to see that happen on the show.

FANBOY SPECULATION: Good. The show is more fun when everyone’s miserable. Plus, there are lots of secrets that are on a collision course. Let the hi-jinks commence! 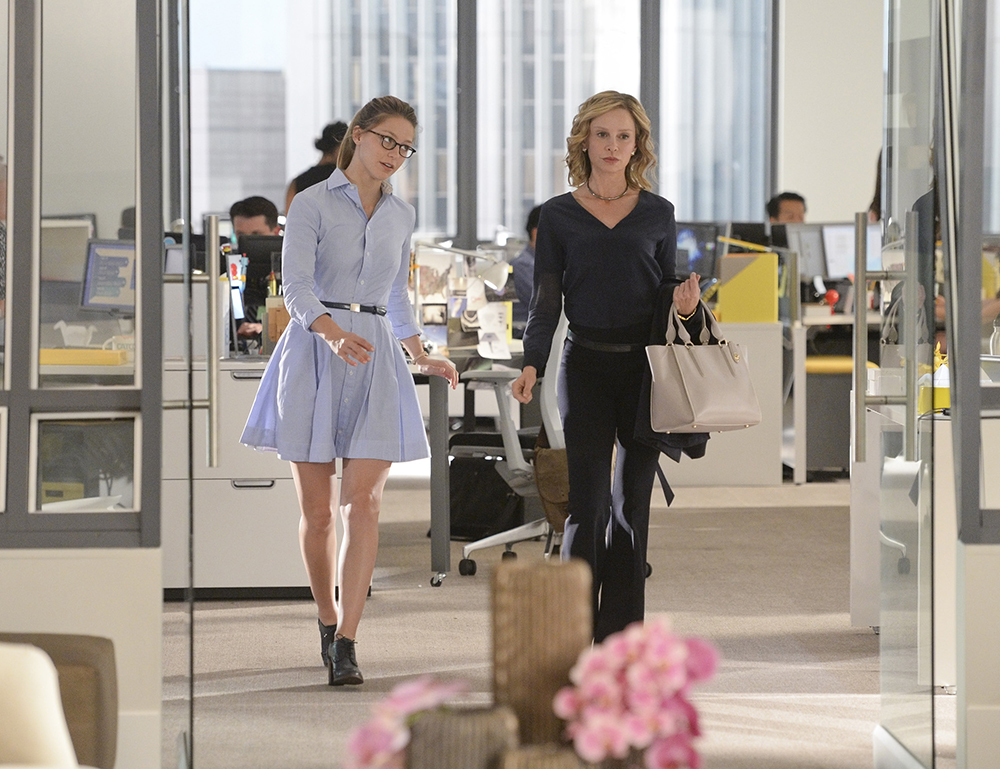 FANBOY SPECULATION: Boy. that’s a lot of reveals for a girl from National City!

First, a quick huzzah for Cat Grant, the best character on the show. She’s hilariously snarky and selfish, and nobody does “mean girl” better. But she’s also whip smart, which is how she deduced Kara’s big secret. Well done, CBS, as it sets the table for this weird, funhouse version of a mother-daughter relationship to get even weirder.

The Kryptonian battle is actually the least interesting part of the show, partly due to bad wire work but also because we’ve seen it, or variations of it, before. One nice thing: Supergirl says “Superman doesn’t kill,” meaning she hasn’t seen “Man of Steel,” but also underscoring what a hopeful, aspirational character she is. Alura’s evil twin is such a cliché that even soap operas don’t use that trope any more, and would only be interesting if it was revealed that Aunt Astra (Laura Benanti) was Kara’s real mother (please, please, please). And the boring Non, who was the mute brute in Superman 2, takes the place of the more cunning Gen. Zod, who is unfortunately not available (See: Man of Steel). The one element of interest is that Astra and Non’s take on the destruction of Krypton is that it was due to androgenic climate change – and that they’re determined to see that Earth doesn’t repeat that mistake. That’s a far more interesting (and sympathetic) motivation than the usual “We’re conquering your planet and re-naming it New Krypton.

And for comics fans, the introduction of Martian Manhunter is the biggest reveal of all. DC Comics has never known what to do with him, going back to his creation in 1955, but perhaps “Supergirl” will finally allow the Last Son of Mars to grow into his full potential. (And he’s got a lot of it!)

CLIFFHANGER: As mega-herd overruns Alexandria, Rick (Andrew Lincoln) leads a group to the armory, covered in walker guts so they can’t be smelled. But a child in his group starts calling for his mother – noise which will attract the walkers. They may be nose-blind and easily fooled, but they ain’t deaf.

FANBOY SPECULATION: If you’ve read the comics, you know what happens next. If you haven’t, I won’t spoil what is probably the most important turning point in a series full of them.

And no, it won’t be pretty.

It seems like the bad guys (Dr Hugo Strange?) may be arranging for Galvan to "get better."

Maybe Galavan with become Azrael. Or there might not be an Azrael. This is a parallel dimension where anything's possible.

FANBOY SPECULATION: A couple of regulars on my message board (captaincomics.ning.com) have dropped “Gotham” as too unrealistic. They single out in particular a scene where a cop was killed at the station house with no repercussions.

Some of us are fine with "unrealistic." As I've mentioned elsewhere, I don't expect "realistic" (you all know where I stand on "realistic"), but I do expect plausible.

But hey ... have fun without me. From what I see in the promos, it does seem that the new captain played by Michael Chiklis has launched the all-out retaliation that was called for the first time a cop was killed in the station house.

Chiklis is a real by-the-book guy, but as the show keeps demonstrating, that doesn't work in Gotham. He stops Gordon from beating a crook to death, and minutes later that guy kills a cop on the way to booking. This is a place where all the norms of civilization have basically broken down. It's Walking Dead without zombies. Once I accepted that -- and that it wasn't the comic book Gotham -- what the showrunners were doing snapped into focus and I really got into it.