Mid-South artist Lin Workman showcased at The Orpheum in Memphis

Why is local artist Lin Workman having an art show at the historic Orpheum Theatre this month? Well, for one thing- Lin can't sing or dance! 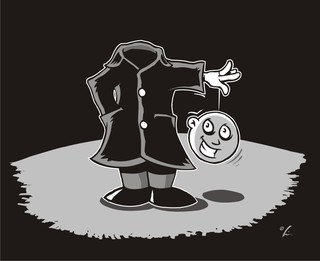 The other reason is to help raise money for the new Performing Arts and Leadership Center the Orpheum plans to build next door to the theatre. 20% of the proceeds from art sold that week will be directed to the Orpheum's capital campaign for that project, which hopes to break ground in 2013.

During the run of “The Addams Family” – April 24-29, Lin will have 8-10 pieces of art for sale in the space formerly occupied by the Orpheum's gift shop. The paintings will be a mixture of his "Scared Silly" cartoons and airbrushed "monsterpiece" portraits and will vary in size and price.

The show will be open during “The Addams Family” performances and during intermissions. The Orpheum doors open one hour before performance times.

Lin has been part of the Orpheum's many charity auctions in the past and is excited and honored for the opportunity to show his work again "where Broadway meets Beale". Lin is a native Memphian, and was recently transplanted to Hernando, MS- just a few houses down from a cemetery. He is a member of the Mid-South Cartoonists Association and the DeSoto Arts Council, and part of the Haunted Web Of Horrors' scare crew. His last day job was designing grave markers, tombstones, and other monuments. He dug it, but still feels weird going into cemeteries after dark.

Lin also feels weird talking about himself in the third person.

For ticket information to see “The Addams Family” at The Orpheum you can go to http://www.orpheum-memphis.com/ online, stop by or call the Orpheum's box office at (901) 525-3000, or visit the Orpheum store located in Booksellers At Laurelwood at the corner of Poplar and Perkins.

The Orpheum Theatre is located in downtown Memphis at the corner of Main and Beale, one block from the Beale Street Historic district.

Lin was known as "Dork Vader" on our previous board.