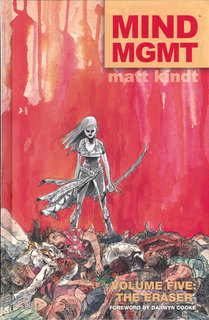 The penultimate collection of the series, this arc finds Meru relentlessly going after The Eraser, who is trying to reestablish MIND MGMT. She's convinced that time is of the essence, so much so that she barely has time to deal with the breakup of her group in the previous collection. Duncan is MIA, but the agent he had prearranged tells Meru she must find the First Immortal, something no one has ever done (or returned from, either). When she finds him she learns all about the secret founding and early history of MIND MGMT--probably the last big secret in the series. She plans her attack on The Eraser assuming she will be alone, but winds up with some surprise allies. Nonetheless the result is in doubt. The Eraser is wounded but escapes and passes out. The final issue in the collection is cast as one of the YA novels written by P.K. Verve which served as MIND MGMT indoctrination tools. She remembers meeting and marrying him, and her career in MIND MGMT. Much of this information has been previously revealed, but it's interesting to see it all in one place, and from her perspective. As the issue ends she is awoken by her ally Lance, setting up the final conflict in the sixth volume.