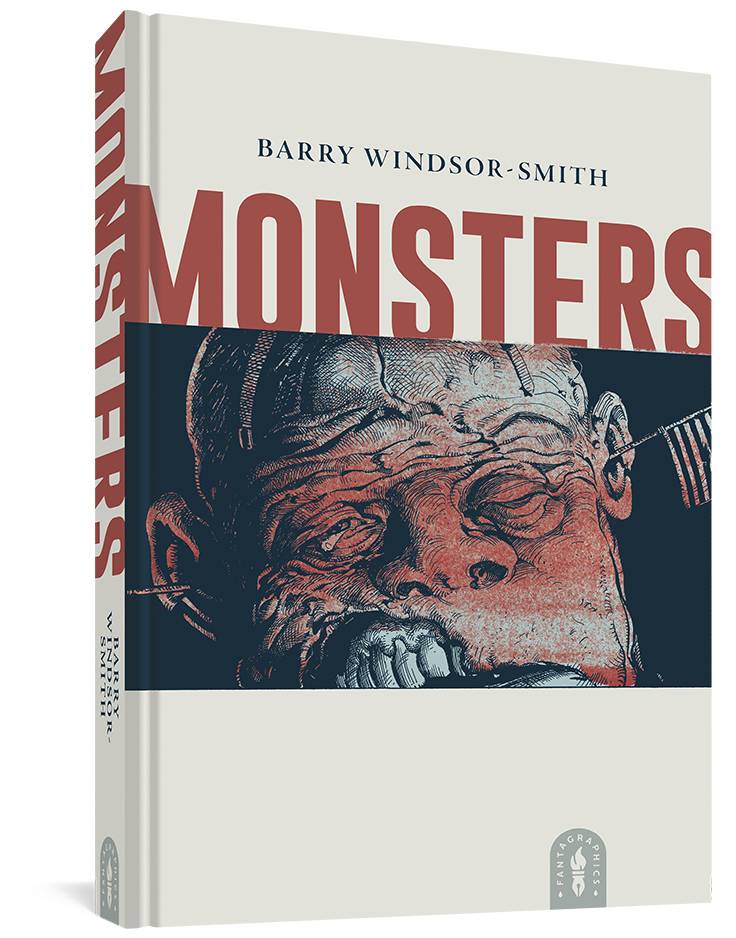 "Created over a period of 35 years, Barry Windsor-Smith's Monsters is a tour de force of visual storytelling. Part family drama, part espionage thriller, part metaphysical journey, it is an intimate portrait of individuals struggling to reclaim their lives and an epic political odyssey across two generations of American history. Monsters is rendered in Windsor-Smith's impeccable technique, the visual storytelling being the most sophisticated of the artist's career. There are passages of heartbreaking tenderness, of excruciating pain, and devastating violence. It is surely one of the most intense graphic novels ever drawn."

Apparently this started out with  Marvel as a Hulk project in 1985...?

Has anyone here ever heard of this?

A buddy of mine, who is also a big BWS fan, recently sent me a link regarding the book.  It sounds massive - over 300 pages if I remember correctly. It does seem like many years since I first read about the project - either on his website or in one of his Opus books. It sounds as if it will be a very price-y book for hard core collectors only.

Interesting. I expected the price point to be closer to IDWs Artist Edition books.

As much as I like Windsor-Smith the artist, I am not much of a fan of his writing. I quickly lost interest in his Storyteller series after a couple of issues. My preference is for his stand alone paintings and illustrations.

I might not want a steady diet of it, but he has a quirky, distinctive style in the vein of other artists who write such as Jack Kirby and Neal Adams. (None of their writing styles are similar, but they're all "quirky and distinctive.")

I've never heard of this, Jeff. It sounds interesting, and really that is a great price point in today's market.

I remember liking Storyteller, but I haven't ready those since they came out. Looking it up, that series wrapped up in '97.  I have no idea if they hold up though.

An article in Comics Shop News #1739 provides details on this project, largely from information provided by Jim Shooter. According to Shooter, someone at the Marvel offices made photocopies of BWS's art before a deal had been formalized, and those pages were kept in Al Milgrom's "Hulk" drawer. "Bill Mantlo, looking through the drawer to see what current Hulk artwork had come in, saw the copies. He then blatantly ripped the story off for a regular issue of the Hulk... Barry was furious. I don't blame him..."

I don't necessarily take Shooter's account at face value. He implicates Milgrom and Mantlo by name, but only mentions that "someone" made photocopies of BWS's work. Plus, although Bill Mantlo undoubtedly wrote a story along the lines of Smith's plot (Bruce Banner as a victim of child abuse), he is unable to give his account of how that story came to be. Nor have I read BWS's side of the story. I refer those interested in further details to this week's CSN #1739.

I spent seven hours reading this yesterday. It absolutely blew me away! I feel confident in predicting that this will be THE graphic novel of 2021, even though today is only the first day of May. I feel so strongly because this is one of the greatest graphic novels I have read, ever. I don't know if anyone here has ever noticed this about me, but I very seldom if ever use the term "graphic novel." That is because I don't feel comfortable using the term "novel" to describe a work that is often little more than a short story. Granted, seven hours is a lot less time than it would take to read an actual novel, but characters move in and out of the narrative with motive and purpose, as they do in the best of prose. It's not written in "chapters" per se, but narrative flows seamlessly from one set of characters to another and/or one time frame to another that it's difficult to put down. Sometimes, the payoff of one scene might occur, quite unexpectedly, 100 pages later.

Regarding that whole Mantlo/Shooter "who stole what" discussion above, it's completely irrelevant. There is no introductory text by BWS at all; he just lets the work speak for itself, and it speaks volumes. There is one small section of the book which did find its way, vastly watered down, into a page or two of The Incredible Hulk, but otherwise, no Marvel Comic is like this. I would love to discuss it with others who have read it.

My LCS hasn't gotten their copies yet...

Aw, man! Here I was hoping to read what you thought of it.

Your LCS will likely get theirs tomorrow if mine did last week.

If you're on the fence about buying BWS's Monsters, read this review.

(Thanks to Richard Willis for the link.)

I got my copy on Sunday. Now to find time to read it. It is next on my to-read list. I just need to finish up volume 2 of the Speed Racer manga

Okay, I finished this yesterday morning.

The art is incredible. I absolutely loved it.

The ending just about brought a tear to my eye. It was great, no joke.

Honestly, BWS needed an editor. My main complaint is what I have complained about before. Artists who turn writer seem to forget that comics are a visual medium. We really needed to cut this book down. I seriously got eye strain reading this.