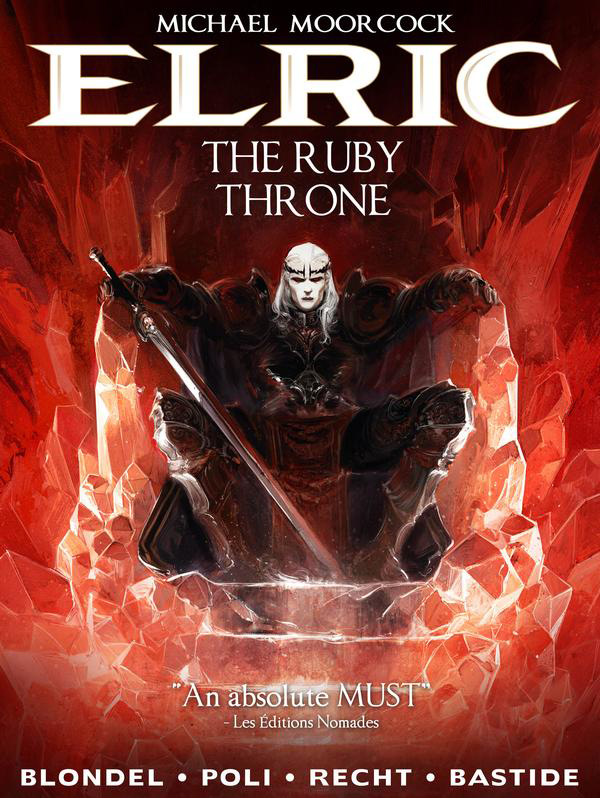 The Ruby Throne came out in September. Copyright Titan Comics 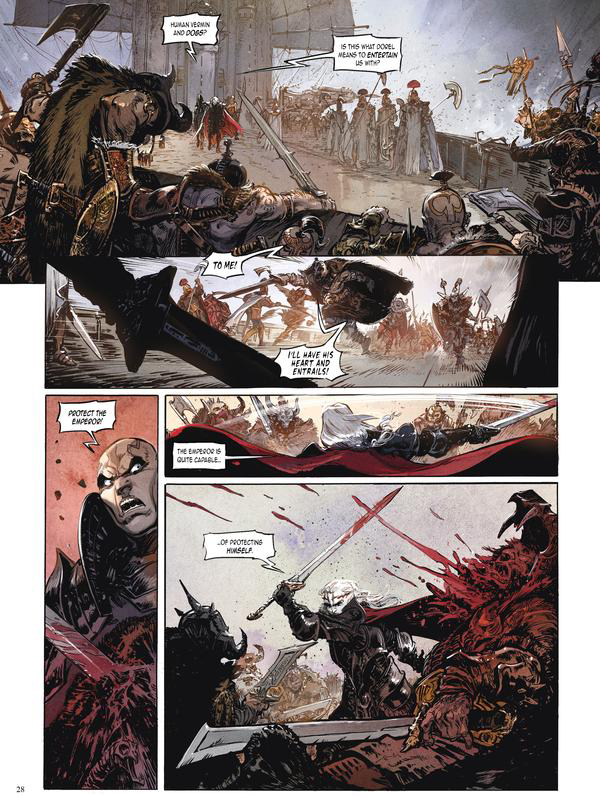 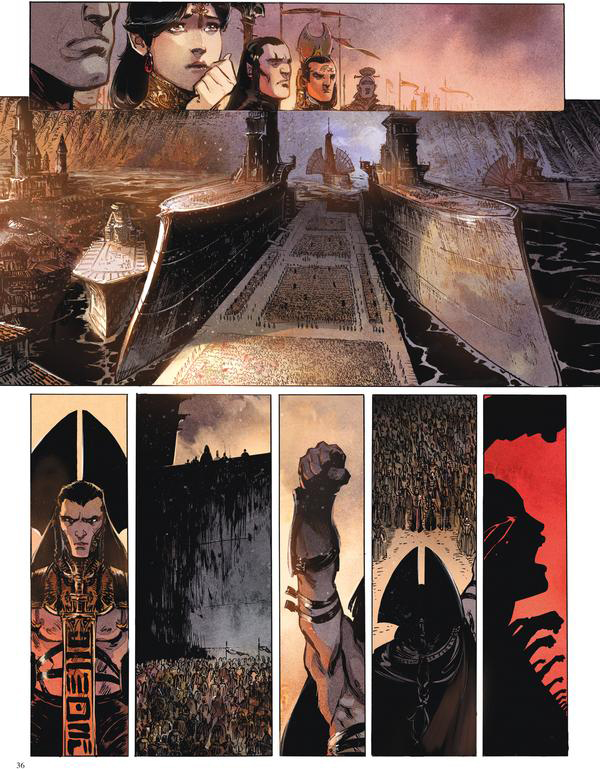 The artists outdo themselves presenting the grandeur and awfulness of Melnibone. Copyright Titan Comics 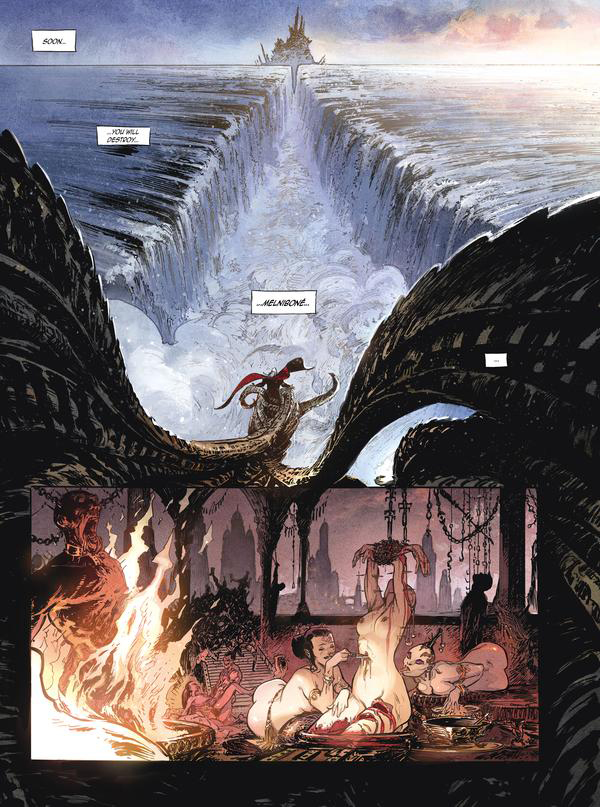 The decadence of Melnibone is appalling. Copyright Titan Comics

Elric of Melnibone leapt from the fertile mind of English writer Michael Moorcock in 1961, and has captured the imagination of fans, writers and artists ever since. The doomed albino has done it again, this time with a new graphic novel series that Moorcock himself calls in his foreword “the best graphic adaptation of the story.”

That is a stunning thing to read. Elric has been painted, drawn, sketched and adapted by a host of A-list creators in the last 50-plus years, including Yoshitaka Amano, Howard Chaykin, Michael Kaluta, Mike Mignola, Frank Miller, P. Craig Russell, Walter Simonson and Michael Whelan.

And what a world it is! Elric isn’t just a prince of crumbling Melnibone, but of science fantasy itself. Elric is a forerunner to a great many fantasy characters, and for good reason: He’s fascinating. Elric is a melancholy figure, one who knows he’s doomed. As a prince of Melnibone, he watched his people sink into a cesspool of personal vice and corruption – which he was helpless to prevent, being too weak to live without constant support from various drugs, herbs and sorcerous sacrifices. Challenged by his cousin Yyrkoon not only for the throne but for Elric’s consort Cymoril (tellingly, Yyrkoon’s sister), events are set into motion that bring Elric into the service of Arioch, Lord of Chaos and a duke of Hell, and unite him with the cursed sword Stormbringer, which provides Elric with the strength he needs at the cost of his conscience – for Stormbringer feeds on the souls of those he cuts down.

Moorcock touches on this and numerous other fascinating topics in his foreword – alone worth the price of admission for Elric fans – which begged for a follow-up interview. Amazingly, this busy titan granted one via e-mail.

So how does Moorcock himself explain Elric’s longevity?

“Although written in a form favored by what at the time was a very small group of authors,” he said, “including [J.R.R.] Tolkien and [Robert E.] Howard, it was in the position to influence the genre as they did.  [Dungeons and Dragons] swiftly incorporated my mythology and use of forces called Law and Chaos, rather than Good and Evil, and other ideas of mine which quickly worked into the common notion of what the genre is.  I wrote Elric after being immersed for years in Norse, Celtic and other mythologies, rather than reading a supernatural adventure story and deciding to write one like it.  Early examples of genre often have a vibrancy later examples lack.”

In the foreword, Moorcock wrote of Elric’s internal conflicts as versions of his own – those of a young lad in post-empire England, dealing with an older generation immersed in nostalgia for the power of the past.  “My dialogue with my nation and her culture is what powers many of my books,” he wrote. "Whether directly or, as here, symbolically.” But since that’s not a universal experience, does Elric somehow connect on a broader, less specific level?

“I'm not sure our histories need be shared for the stories to work on a subconscious level,” Moorcock responded. “My readerships tend to be largest in nations which have had a history of empire-building and [empire]-losing.  Elric was written at a time when the British and French empires were declining and breaking up and the U.S. began an expansion ostensibly to contain communism.  The lessons of Europe didn't seem to be lost on the readers I got in the 1960s here.  Broadly, we tend to have similar tastes (as I can tell from my elaborate website Moorcock's Miscellany) and often share experience.  Years ago an SF fanzine did a survey of all readers and discovered they had striking similarities, frequently finding ‘privacy’ in reading, either as only children or otherwise isolated. I wrote Elric when I was a late teenager and his angst still resonates!”

One aspect of Ruby Throne that is both fascinating and repulsive is the depiction of Melnibone’s loathsome lack of morality. “This is perhaps the first graphic version of Elric fully to capture the sense of utter decadence I tried to convey in the books,” Moorcock wrote in the foreword. But while the word “decadence” brings to mind kinky sex for most people, the decadence of Melnibone is one of cruelty, both casual and meticulous, elaborately inflicted. I had to ask Moorcock: Is Melnibone’s cruelty symbolic of empire in general, or the British Empire in particular? That is to say, is their “different sense of morality,” as he phrased it, a specific symbol, or just useful for the story at hand?

“Elric's people believe they are superior to humans,” he said. “Their superiority is self-referential and tells itself that humans are less civilized, sensitive and creative than Melniboneans.  It's the attitude that powered slavery and still powers arguments against equality.  A nation which lies to itself and becomes introspective and isolated as a result of those lies  is, to me, a far more decadent society than one which believes in ‘free’ or ‘perverse’ love.  Elric is specifically about my experience of empires in decline.  Some are in decline even when they believe themselves at the height of their power.”

Also in the foreword, Moorcock says author Blondel “has given the story which, with my approval, have improved on my narrative!” Pressed to elaborate, Moorcock said:

“Mostly it has more to do with the placing of narrative information than any radical change.  I think he has deepened and darkened the character of Cymoril, Elric's cousin and his betrothed, to considerable effect, making her far better motivated and quite a bit more of a Melnibonean than Elric. In this she resembles her brother.”

Finally, if Ruby Throne has a fault it is that is only the first part of a four-part adaptation of “Elric of Melnibone,” the 1972 collection of Elric stories that are, essentially, the canon. So it doesn’t get to one of the terrifying and mesmerizing aspects of the Elric mythos, which is his relationship with Stormbringer, the sentient, soul-sucking sword. A sort of inverted King Arthur, Elric needs his sword to feel healthy and to achieve any sort of victories, but the cost is nearly unbearable: Elric, unlike most Melniboneans, has a vestigial conscience.

I asked Moorcock what the inspiration was for Stormbringer. Excalibur? Demon consorts? A physical manifestation of the seduction and corruption of power?

“All of them,” he said,” plus a man's relationship with the most obvious symbol of his manhood. Shocked and, indeed, awed by the power, the pleasure and the pain such a thing brings him.  Elric owes as much to Freud and Jung as he does to Poul Anderson and Jack Vance.”

Which fans can see for themselves with The Ruby Throne. Volume 2, Stormbringer, is scheduled for a March release. In addition to bookstores and comic shops, the Elric series will also be available on iPad, iPhone, Android, Kindle Fire and comiXology.com.  For more information, follow Titan’s website (titan-comics.com), Facebook page or Twitter account (@comicstitan).

Permalink Reply by Detective 445 on December 11, 2014 at 8:00pm
Wow, this looks fantastic. I'm a huge Moorcock fan but haven't been paying attention lately and had no idea this adaptation existed. Still hoping for a feature film someday.

Recently I've been making my way through Jim Starlin's Warlock saga for the third or fourth time -  I'd be shocked if Starlin wasn't heavily influenced by Moorcock's work. In the sequence where Warlock is driven to madness by the Magus you could easily substitute Elric and Stormbringer for Warlock and his soul gem.

So jealous you got to converse with Moorcock!  He is a giant of the form.  I hadn't realised that Elric was a critique of the British Empire in it's decline.  I read and reread the Hawkmoon books a few times though and it was much more obvious there.  The little free band were based in the Camarg in the South of France, and the baddies were decadent, masked monsters from "Granbretan".

He does seem to have studied Celtic lore very deeply.  The idea of howling, singing demon-possessed swords does come up in old Irish stories and doesn't seem to have been used in fantasy before Moorcock, although it is practically a trope now.

I didn't know about singing swords in Celtic mythology. The only one I knew about was Prince Valiant's, which was just a nickname, IIRC -- and that was doubtless lifted from Celtic mythology as well. Still, I was a little surprised that Moorcock pointed out the obvious about Stormbringer (that is likely true of all magic swords) is the "manhood" connection. The man is fearless.

Cool interview, Cap! My friends got me into Elric books late high school/early college. I really enjoyed it. We even played the RPG based on the series for a while (Stormbringer).