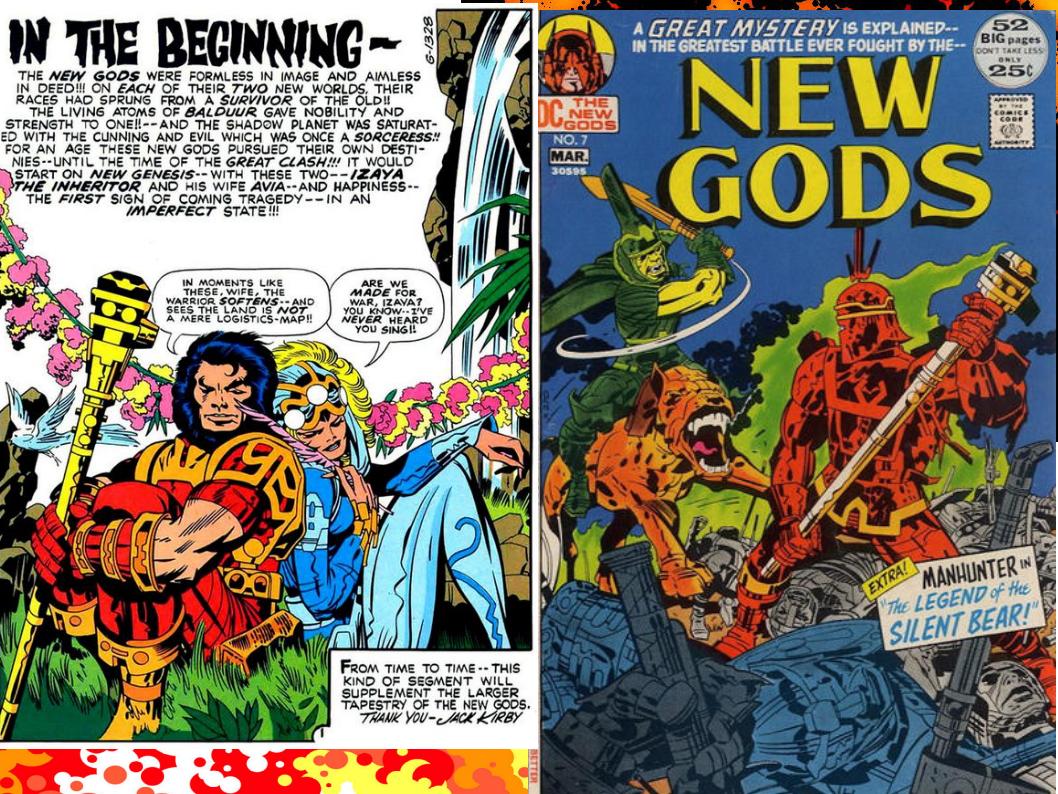 “The first and most lasting impression we receive from Jack Kirby’s art is that of power. On page one, even while resting, Izaya and his elegant wife Avia are depicted in mighty, massive terms, Izaya’s face is square, blocklike. His thin, wide mouth runs across a full two-thirds of his chin. His nose is perfectly, almost mathematically centered and squared, like an upside-down crucifix. His dark, finely shaped mane and heavy, demonic eyebrows make him lion-like in appearance. His expression, however—the slight curl of the lip, the liquid waver in the eyelid—reflects the moment of peace he and his mate are sharing.

“Izaya’s hands are enormous. Even with his fingers pressed tightly side by side, the warrior could easily block his entire face with a single palm. His biceps, too, reflect the rock-hard might of his being. They are round, full, sliced here and there by jagged diagonals and heavy, black quarter moons. These cutting brushstrokes give a solidity to Izaya’s round arms. Without them, the warrior’s bulbous appendages might be considered flabby. These same motifs appear on Izaya’s legs. Heavy black brushstrokes run parallel with the outlines of those pillars, telegraphing to the viewer’s eyes a sense of granite firmness.

“Indeed, Izaya’s frame would have to be powerful just to support the clothes he wears. Bands of metal and leather encircle his shoulders, waist, lower arms, and calves. His gloves are thick, wrinkling only in straight lines as is the wont of stiff material. The rod of war he holds is topheavy, huge, yet clasped effortlessly, even loosely, in the warrior’s right hand. This rod, by the way, is not only Izaya’s weapon but Kirby’s storytelling device. [Potter goes on to discuss the rod’s symbolic significance throughout the rest of the story.]

“Avia registers in the viewer’s mind as powerful, but in a feminine way. She is surely no frail schoolgirl. The outlines of her arms are lighter, less rigid than those of Izaya’s. Her face is broad, simple, symmetrical and beautiful. The lines that cut through her appendages are soft and squiggly as opposed to the almost woodcut appearance of her husband’s. Her hair is tied back in a fan shape resembling the feathers on a peacock, accentuating her regal, elegant hair. Her right shoulder gives way beneath her mate’s manly shoulder blades. She is massive but yeiding, solid but soft.

“The setting is archetypal: Paradise, the garden of Eden. Although Kirby claims that draftsmanship doesn’t impress him, he seems to possess an innate sense of symmetry in his compositions. A line projected from the top of Izaya’s rod to Avia’s wrist would slant downward from the left to right. The line of flowers behind the couple executes a similar slant. However, this downward motif is offset by the waterfall and cliff, immediately causing our eyes to sweep upward. Likewise, if we project a line outside the panel from Izaya’s toe to Avia’s sole, it would slant upward in a manner diametrically opposed to our earlier line, again offsetting and balancing it. This kind of Draftsmanship is exhibited in many of Kirbys later panels as well. It is difficult to carry Alex Raymond within one’s head and completely disavow draftsmanship.

“‘In the Beginning’ is the most promising phrase in the panel. It is interesting to note that Kirby, who makes heavy use of subjective gods, takes so much from Judeo-Christian tradition, which insists upon an objective God. [Potter goes on to discuss Kirby’s use of religious motifs throughout his work.] ‘In the beginning the gods were formless in image and aimless in deed’ tells us more about the creation of society by man than the creation of life by God. The poorly drawn Biblical dove which flies past Izaya and Avia (Kirby is never at home with light, feathery forms) is a reminder, albeit an unintentional one, that the ways of heaven only hold a tokenistic place in the saga of the New Gods. Kirdy is really writing about men for men. His gods are as corporeal as his style is massive.”

Potter goes on to examine the rest of the issue in equally minute detail. I love this kind of stuff. Elsewhere in the issue, Greg Theakson offers as similar examination of the composition of page five of Fantastic Four #64. Amazing Heroes #100 (an issue-length tribute to Kirby’s work) did as much to make me a fan of Kirby as anything else I can think of.

No one will ever make this kind of analysis of Scott Adams' "artwork".