To me, Sal Buscema was a major step DOWN from Marie Severin, who I feel was a better match for Namor than Gene Colan or John Buscema.

Oddly enough, I thought Ross Andru was a much better match with Namor than he ever was with Spider-Man... but unfortunately, he only drew 3 issues, each one finished by a different inker.

Warrior Woman to me was a marvel version of a nazi Wonder Woman.  I thought at the time that if she and Uber-man (Was that the name) had gotten their act together they could have taken the Invaders out easily.

I guess, law of averages, it had to happen once in a while...

I'm still missing one of Andru's 3 issues.  I have the one inked by John Severin (which is a flashback over Namor's career), and the one inked by Jim Mooney.  There's a full-panel shot of Namor flying in the Andru-Mooney issue that I thought should have been used as a new cover corner-box pic, to represent the era of Namor giving up the throne and being a lone adventurer again. When I mentioned this to Roy Thomas, for once, he actually agreed with me, too, saying, "How did I miss that?"  Instead, they kept the "regal" corner pic, which I think went thru several versions.  The 2nd, wimpier one, stayed around too long, until Bill Everett drew a new one halfway thru his short run.  Then before you know it, they replaced that with the "biker suit" version.

There's something about Marie Severin's Namor that really feels "right" to me. She also did some fabulous covers.  The one where Manhattan is in flames (#21) was used in the TV documentary "Comic Book Superheroes Unmasked" as an illustration of how comics predicted things like "9-11" long before they ever happened (or something). 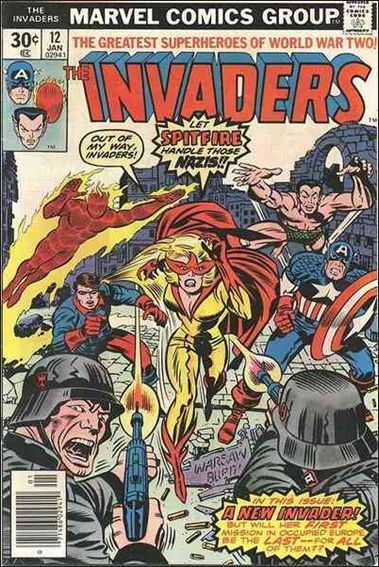 There she is! Centre stage in that Kirby cover – the newest Invader – SPITFIRE!

She doesn’t actually get revealed in all her splendour until page 9 inside, however, and she’s a lot more lady-like there too.

Kirby has her costume looking all shiny and armour-like on the cover, while Robbins and Springer make her look much softer and almost velvet-like inside...

The story takes the bad-guy behind the previous issue’s Blue Bullet and makes him a Polish Jew working for the Nazis only to protect his younger brother who has been left behind in Warsaw.

The Human Torch – glossing over his melodramatic quitting last issue, collects his teammates to go save the brother…and they all meet Spitfire!!

Jacqueline talks the boys into letting her join and off the team goes to occupied Poland.
Once there they locate their quarry almost instantly – but he refuses to leave with them, preferring to fight from inside his country – and to prevent innocent deaths, the Invaders surrender to the Nazis but Goldstein vows justice! 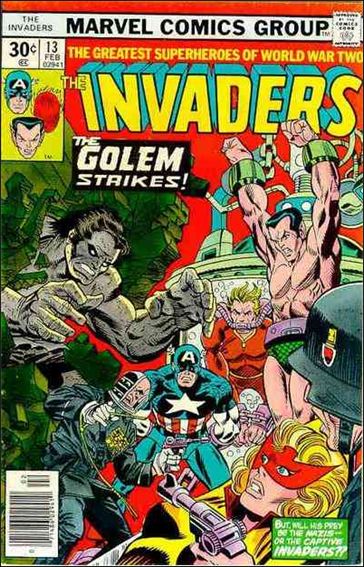 I’ve been asking for a cover by someone other than Kirby and here is one by one of my all-time favourites the masterful Gil Kane – but – it’s not one of his best, looking a bit cramped and a bit rushed! – Again I’d have liked to see the cover by the interior artists!

The Invaders are helpless before their Nazi captor, called ‘the Face’ he has only half-a-face, the rest being behind metal. (All very Batman or Dick Tracey villains again – I take it this was another actual war-time comic villain referenced again by Roy Thomas!)

Back in the ghetto, the younger Goldstein brother laments the capture of our heroes and creates – from clay – the personification of the struggles of the downtrodden people (or something like that?) – The Golem!

A grey cross between Frankenstein’s monster and the hulk, complete with the word ‘EMETH’ engraved in its forehead – meaning ‘truth’.

The Golem frees the Invaders, and kills the Face.

The word Meth gets smudged into ‘METH’ meaning ‘death’ and the Golem fades away to be replaced by Goldstein – a la Bruce Banner.

Goldstein refuses to leave with our heroes, claiming the Golem will rise again if his people need him…previewing the Warsaw ghetto revolt of 1943.

And so ends the sprawling Invaders tale begun back in #7.

I believe this was another one of those ‘worthy’ tales that Thomas liked to trot out, as I am sure I have read many versions of this ‘Golem’ character. ‘Worthy’ again because of the Warsaw Jewish revolt and the plight of the religiously persecuted in Nazi fatherland etc.

The addition of the new speedster Spitfire to the Invaders does not appear to affect the team dynamics too much. – The concern of how both the Torch and Cap will cope with having the object of their affections in the team is agonised over at the beginning of issue #12 but effectively gone by the end of #13.

Jacqueline appears to fit very quickly and very easily into her heroic role –perhaps too quickly but refreshingly it’s not her alone that saves the day, a cliché even for Thomas – the hero here is the Golem.

Maybe it’s the depth of the grey – clay that makes up the Golem, but as soon as our heroes reach Poland everything gets very dull.

Next issue: Captain Wings! Thunderfist! Dyna-Mite! The Spirit of ’76! Ghost Girl! Tommy Lightning!
They Are – The CRUSADERS!”

Ah, yes, you've at last reached the stories I've actually read. I do remember seeing the Golem story - though at the time, I hadn't heard of the Golem legend. I confess to never having liked the artwork on these stories.

It was later that I learned of the Warsaw uprising and wondered how that would have fit into any Invaders story. The man who bravely decided to stay behind probably died. I also thought it was a quick turn-around for Jackie because she was dead set against her father getting into costume.

Roy Thomas did enjoy his pastiches, didn't he?

Using the Blue Bullet and the (Polish) GOLEM as pre-war versions of Iron Man and the Hulk opened up the WWII era Marvel Universe to broader concepts and expanded the levels of power. Later he would start having guest appearances from more established Marvel characters.

Beyond the Liberty Legion, Thomas would never utilize the myriad of Timely characters that he could have used, except for one notable revival and that got extensively altered.

Even the creation of Spitfire is odd, power-wise as there was already the Whizzer, the (original) Human Top and Hurricane.

I'm guessing Thomas created Spitfire instead of using Whizzer because he'd already established the Whizzer as living until the present in Avengers, and -- as he often did -- wanted a character he could do with what he wanted.

When I first heard the story of the Golem, my first thought was how that story probably influenced Siegel and Shuster when creating Superman as a defender of the downtrodden. That would be one of many influences, but when you squint just right you can see it.

Yea, but at the time taking a woman into combat wasn't really thought of as anywhere near ok. That puzzled me as well, though later I think that because of the blitz so many women were in danger anyway in England it would have been acceptable to have a woman heroine going into the situations that the Invaders went into. Funny thing is that I thought it about Spitfire but it never crossed my mind when I read Wonder Woman.

This was actually the first time I'd ever heard of a golem period. One thing about comics back then was that they really got me curious about mythology. The Bassilisk villain in Marvel Two in One... I couldn't even pronounce the name right until I looked it up in the dictionary :)

I'm guessing Thomas created Spitfire instead of using Whizzer because he'd already established the Whizzer as living until the present in Avengers, and -- as he often did -- wanted a character he could do with what he wanted.

When I first heard the story of the Golem, my first thought was how that story probably influenced Siegel and Shuster when creating Superman as a defender of the downtrodden. That would be one of many influences, but when you squint just right you can see it.

I just ran through the parts of this thread I hadn't read before (hangs head in shame) and had a few thoughts:

* I thought it was understood in Avengers #71 that the trio were before the formation of the Invaders because he had his original shield. He only had that for a little while before trading it in for the round one, because MLJ threatened to sue the round one was easier to throw. But now I'm wondering if this doesn't have something to do with Namor's black trunks, discussed on the previous page. Am I misremembering Avengers #71?

* I believe this was the first instance of Human Torch having a sad because he's an android, which I remember annoying me. Every Golden Age story I'd ever read had him acting heroically and selflessly, so the self-pity routine didn't sit with me well. Besides, after Vision and Red Tornado and God knows who else, I was really tired of self-pitying androids. Why couldn't they leave the Torch alone? This eventually culminated in the Torch almost betraying the whole world TWICE to android overlords, both in stories too awful to recount here (the Invaders ongoing series revival and Rick Remender's Secret Avengers, IIRC). Bleah.

* While U-Man didn't need a mask, Baron Blood did. But is there any explanation for why it looks so silly? I've seen better Halloween masks.

* I'd forgotten that Master Man (and Battle Babe, or whatever the woman was named) were the results of Super-Soldier experiments. They look pretty successful. What was the explanation for why Hitler didn't mass produce them? I'm sure there was one, but I've forgotten.

* And Richard, you asked about conventions on dates. I use the old CBG style, which is to list the first three letters of the month or season of a book and the last two digits of the year. Summer 1970 would be Sum 70, July 1970 would be Jul 70. But that's just me. Use whatever convention you like.

Avengers #71 was NOT the first appearance of the Invaders when the book came out, nor did it include the name "Invaders". It had Yellowjacket, Black Panther and the Vision battle Cap, Namor and the Torch in 1941. But Roy wanted the book included in his Invaders continuity so he crafted Invaders Annual #1 to explain it. So it was the Timely Trio not from 1941 but 1942, with Nazi villains making them look as they did in Avengers #71.

You're not misremembering it, Cap. You're just forgetting Roy's retcon!

As for the Super Soldier Formula, it appeared a couple of times in The Invaders being part of more secret origins than Captain America's. The Nazis had only an incomplete version of it which was why it wasn't as successful as you think. Master Man's strength would leave him and Warrior Woman was unstable.