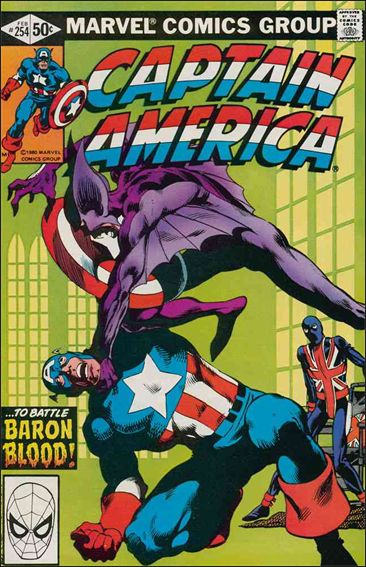 Not a bad cover, good battling figures and an interesting composition.

Credit for the simplistic but unusual green background but clearly we’re supposed to feel Baron Blood has the upper hand in the battle…whereas the yellow light in the windows makes it seem like the sun-will-kill-the-vampire scene from every vampire film – in other words we’re believing Cap’s about to win anyway !

Credit also for trying to get the feeble look of now-very-old Union Jack who now looks more like he’s in his PJs than a costumed adventurer.. .

(we haven’t done a continuing adventure for some time have we?.)
As Baron Blood inches towards biting the neck of our entranced hero we get a flashback of last issue’s story and then….he nearly breaks his fangs on Cap’s chainmail costume!

Cap, Jacqueline and her son Kenneth - along with the sunshine – chase Baron Blood away from his main quarry, the elderly Lord Falsworth, his brother.

Kenneth’s friend Joey Chapman then arrives and working on the ‘never-seen-them-both-at-the-same-time' Cap accuses him of being Baron Blood.

Chapman gets all ‘gor blimey guvnor’ and Kenneth defends his honour by stating that Joey missed the battle because he’s ‘just a sound sleeper…’ not because he’s a baddie!

We then get a great couple of pages of flashback as Kenneth explains the Invaders history with Baron Blood to Joey.
Kenneth ends by lamenting his dead uncle, Brian, the second Union Jack, who died in a car crash in 1953 as we were told last month.

Clearly this is foreshadowing where this tale is going…Kenneth even looks a bit like Brian…Clearly he’ll end up taking the mantle of Union Jack up…?

Further pieces from last issue fit into place as we learn the bearded local doctor has actually been replaced by a disguised Baron Blood who is feeding off blood from some locals including barmaid Jenny who collapses in front of Kenneth and Joey, revealing she’s a victim of a vampire’s fangs!

Later at the manor ancient Lord Falsworth costumes up as the Original Union Jack wanting to play whatever part he can in flushing out Baron Blood.
Unfortunately he suffers a heart attack and the Doctor is summoned eventually revealing himself as Falsworth’s brother the vile vampire.

In turn the Union Jack fights back with vigour impossible for the old man and Blood realises there is a new man in the costume!

Of course there is…Kenneth, we knew that didn’t we?!

Cap joins the battle, sunlight gets unveiled at the right time also

Cap corners the vampire and with a final and unavoidable effort he hacks of the head of the villain with his shield’s cutting edge – finally ending the threat of Baron Blood once and for all.

The new man in the Union Jack mask reveals himself to be…Joey Chapman!  - Kenneth Crichton’s friend. – Not a Falsworth blood relative at all!

“You always were the stronger of us two, Joe.”

After that the bones of Blood’s body and head are burnt separately destroying his threat forever and while that happenes, in a wonderful piece of closure, the Original Union Jack passes away.

These were a great two issues, so seeped in Invaders history and actually moving the stories forward they really do read like a couple of extra Invaders issues.

I loved the chain mail beats the bite opening, this was many years before Cap got drawn with the clear chain mail look costume and it’s usually treated just as a spandex layer like everyone else’s costume.

I love that Stern & Byrne highlighted these kind of gems about Cap that others didn’t.

They even added Cap’s surprise to see Blood retained shape-changing abilities, not often pointed out even in the early Invaders issues.

Joey’s ‘a sound sleeper…’ and Kenneth knows that how…? Oh ah…well…maybe…

Byrne’s flashback of the Invaders and the birth of Spitfire etc is a treat, his art is still restrained here and although no Toro and Bucky, it’s good to see the rest again.

Clearly Byrne had a great interest in the Invaders; it’s his influence that filters through their ‘returns’ over the next few years as we’ll see…

Lovely little scene of middle-aged Jacqueline and her Spitfire costume, it didn’t really make you think she was coming back but was a nice nod, again, to the past.
(She still fluctuates between skinny to rotund however!)

Really, Baron Blood attacks twice and both times the sun’s out and the curtains reveal his doom! – Both times?!

Was this the first time Cap openly killed an enemy?

I know he must have done it in the war but was it ever shown that Cap did indeed take a life?

I was surprised that the headless corpse was actually shown in the artwork.

We get the body of the finally defeated Baron Blood, the revelation that the ‘New Union Jack’ is actually Joey AND the death of the Original.

But it’s a beautiful last panel/page with a reverential caption…
“Dedicated to FRANK ROBBINS, creative artist and storytelling wizard…and the man who first drew Union Jack…”

But – it takes such a long time to do it and it’s all tied up in the links to the Vision and that awful, pasty-white Vision of Byrne’s that I cannot bear to re-read those issues…!!

So – all you need to know, is by the time we come back…

I remember getting that Captain America story at the time, and enjoying it quite a bit.  At the height of his powers, Bynre is quite good.

Permalink Reply by Richard Mantle on February 19, 2014 at 12:38pm
Hello Mr Baron sir.
I agree about Byrne but as I said he definatly benefits from being restrained by his inker.
Also it is notable that he shares 'co-plotter' status with Stern here. Byrne seemed to drive the INVADERS narative wherever he went so I'm happy to believe this tale was more his idea - and indeed that shows when he picks up the threads in our next examples in his Namor title.

I also enjoyed the Baron Blood storyline, The most poignant moment was when Jackie realizes that Cap is younger than she is, even though in WW she was the younger of the two of them.

She did mention that her powers faded over time.  I was sure that her son would be a mutant though.

Permalink Reply by Richard Mantle on February 19, 2014 at 4:00pm
I was convinced her brother Brian wasn't dead. A car crash? Union Jack II ? The original Mighty Destroyer? AND it was off-panel!.

Was this the first time Cap openly killed an enemy?

I know he must have done it in the war but was it ever shown that Cap did indeed take a life?

Since the guy he was killing was already dead, does it count?

I can't speak to Golden Age stories. Cap apparently shoots to kill in Captain America #100 when covering the heroes' escape into the duct, but the resulting deaths are only implicit. In #102 he shoots one of the Exiles with a finger gun and arguably manoeuvres another into killing himself when he crashes into a tree. In Invaders #21 he mans one of the bomber's guns as the plane escapes to the channel.

This is something that has always puzzled me: while Golden Age Captain America didn't run around racking up a body count like the Punisher, he clearly had no "code against killing", even tho he and Bucky were more likely to be seen using machine guns to mow down a roomful of Nazis on the covers than in the actual stories.  Yet when he was revived in the Silver Age, he seemed to have a fairly strict code against killing in place as soon as he woke up.  Admittedly, back then, even the villains were less likely to use deadly force than any but the least violent heroes of today.  Was there ever a story that explained how or why this happened, especially since, thru the magic of suspended animation, he went directly from "super-soldier at war" mode to "super-hero in peacetime" mode without any period of transition to get used to a new way of doing things?

Permalink Reply by Randy Jackson on February 20, 2014 at 1:00pm
I think the "code against killing" in the Silver Age was primarily due to that being the norm for the time for superheroes. The Comics Code probably had a huge impact on this, and it had been standard for DC for years. If a character wore a costume and was considered a hero, he or she didn't kill. In fact, the only Silver Age Marvel characters I can recall killing were the likes of Nick Fury. It may have been implied for the Hulk. Also, it wasn't that the villains wouldn't kill, there would usually be some sort of circumstance that kept them from using guns, from "I don't wanna face no murder rap" to "If I shoot, I might hit one of my guys because we're too close together".

I don't think it was until the Monster era for Marvel that killing became more commonplace.

Was there ever a story that explained how or why this happened, especially since, thru the magic of suspended animation, he went directly from "super-soldier at war" mode to "super-hero in peacetime" mode without any period of transition to get used to a new way of doing things?

Without re-reading Avengers #4, I think Cap was told what year it was and that WWII was long since over. So intellectually he knew that the war (and thus the killing) was over. He probably didn't have warm feelings towards Germany and Japan for awhile, but I don't think this was addressed.

Also, the going from "at war" to "peacetime" in a the relatively few hours it takes to get home is what all soldiers since Vietnam have had to deal with, some better than others.