Sounds like the Avengers were still in fascist mode. I have to laugh at the idea of anyone discussing ethics with Tony Stark. I'm not surprised that Toro was experimented on. 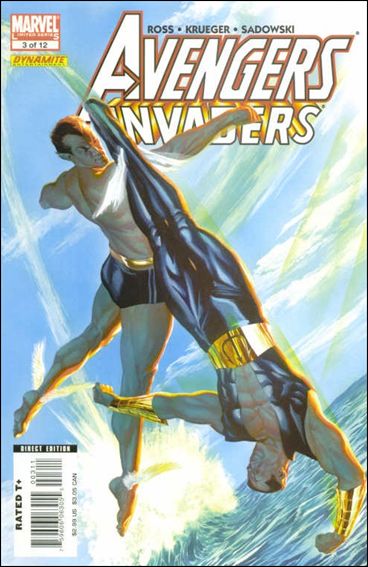 To the story then – WWII Namor swims off to find Atlantis a wasteland, destroyed (I forget when or how many times this counts as) and he’s not happy that his older self could have allowed that to happen.

Elsewhere, at the Lincoln Monument in Washington, Cap’s old rebel team of Avengers discuss the return of the Invaders and Dr Strange explains that he’s holding back “the realignment of time” (which I don’t understand at all!).

Elsewhere again, WWII Paul Anselm, soldier, and catches up on his life he led/will lead with Paul Anselm retired.

Back to the seas and Namor recounts his origin (could anyone reading this tale NOT know that story?) and both Namors finally meet.

The difference in Namor spanning the decades as depicted by artist Steve Sadowski is interesting, in that other than now-Namor wearing the black there is no real difference…but both have the most ridiculously long pointed ears!

On the SHIELD helicarrier, we catch up with the escaping other Invaders…, we get a half page recap of the Original Human Torch’s origin (again – was this necessary?) and we see how he is actually feeling  about the abundance of Life Model Decoys on the ship…

The issue ends with Bucky wielding the shield – remarking that only one man can really carry it – but foreshadowing his possession of the shield and the costume in ‘current’ Marvel.

Not much Avengers this issue and that suits me just fine.

Come back next time… 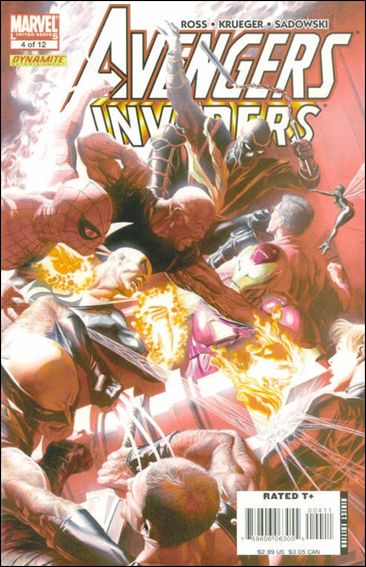 Again, it’s debatable – this is either a beautiful Alex Ross cover -or it’s a jumbled mess.

Ronin looks like the Green Goblin, the Black Widow looks like a teenager, Ares is going thin on top and I think the Human Torch is in a tube-casket in the centre but it’s really difficult to make out. Sorry, I find this one difficult to work out.

We pick up the story right at the end of issue three and Bucky has thrown Cap’s shield to Cap…only missed and it’s fallen to earth, useless . (Our team is in the sky on the helicarrier, remember?)

The new Captain America (the older Bucky) retrieves the shield and now has a matching pair.

(Now that confuses me- the two shields he now has are the same shield from two different times. – Shouldn’t that in itself cause some great ‘rip-in-space/time-type-thingie’…?)

Toro is being examined by scientists, labeling him as one of the earliest mutants.

I really hoped this was going to be the beginning of a sensible, in-depth explanation of Toro, how his powers manifested, why they took on the characteristics of the Torch, lots of questions appeared to be heading for an answer in this series…it’s no spoiler to say we never really get them.

Anyway, Bucky frees Toro and they in turn free the Torch who is not happy to see the use of Life-Model-Decoys – a type of artificial life similar to himself, being used by shield. – I loved the Nazi overtones as Bucky saw a ‘Stark’ label and reminded his team that that translates as ‘strength’ in German…

We do see Stark, changing to Iron Man and discussing how important it is to get the Invaders back to their own time.

The nearest thing to a baddie we have so far – is Stark, - it’s just not right is it?

Meanwhile, somewhere under the sea, victorious WWII Namor leaves the battlefield and we learn that ‘our’ Namor was faking his attitude and his loss in the fight, so Namor doesn’t grow into a bad-version of himself. Get that? It sounds like an excuse for losing the fight to me.

We get some exposition as Dr Strange explains that ‘our past has changed’ from wartime on the past is becoming different and catching up with ‘our’ time. The Nazis have won the war and so on…

I have no-idea how that works, why the war was lost because the Invaders are temporarily in our time…(again I ask why the old X-Men are allowed to stay in All-New-Marvel Now?)

We and the good doctor discover that it was use of the cosmic cube that is responsible for all the changes and there is a previously unknown link between the cube and the ‘original’ Vision. (That’s the alien guy from another dimension that featured in the Invaders mini-series revival and not the later android – ok?)

I like Strange, I think he has been poorly served for years, if not decades in Marvel, he should never have been an Avenger let alone the de-powered wet-week he was portrayed as whilst in the grouping.  It is good to see him having an important role in this series, but a little more than just info-dumping would be good.

As for this WWII Vision, I’ve never much liked the concept, let alone this retroactive continuity implant that he was an important member of the Invaders throughout their existence. This thread shows he has a passing connection only and he desperately suffers from a J’On J’Onz origin to this point, any added depth to his story would be interesting but I’m not sold yet.

What we are doing is getting an awful lot of characters in this series and not a lot of coherent storyline beyond the fighting at this time.

The artwork is still a bit childlike, over inked and coloured like a child had a new set of felt-tip pens, but it’s all okay – middle of the road sort of stuff.

In the fighting, Cap collects his shield and thanks Bucky for giving it to him, but Bucky never threw it back…he turns and Bucky Barnes comes face to face with Bucky-Winter-Soldier-Captain America who ends the issue with…”Listen to me, Jim. Listen very closely. Your very future depends on it.”

At that point in time Tony was the villain in a lot of ways in the mu.  It's one of the reasons I still hate the character with Carol a close second.  I am kind of disappointed that they never really explored Toro's history and abilities.  I am surprised that SHIELD didn't really dig into the kid, but maybe they didn't have time.

I can see what kind of story the author wants to tell here, but I think the cast is simply too large and the cover shows the main problem: no one is being handled well either individually and the co-ordination between the characters/groups is too jumbled to make it work.  There is just too much in the blender to make a good drink.  Add to that the retcon you mentioned of the villain, the time problem that everyone paid attention to then but that Hank would later ignore to bring the X-men into the future... Not a problem then because there had been a lot of stories showcasing how dangerous it was to meddle with history (when the FF met the Invaders, when the Thing teamed up with the Liberty Legion), only supervillains really pushed time travel, but a problem looking back on this story now.

Can't you forgive Carol, considering what was done to her before?

This a theory, and just a theory, but maybe mirror images would emphasize how alike they are, and Ross was going for differences. As in: the younger Subby is taking a wild swing, while the older Subby is elegantly gliding by, easily avoiding the punch. Youthful bull-in-a-China-shop vs. older sophistication and experience.

As I said, just a theory.

It's also similar to a Bill Everett drawing of Namor vs the Torch that I recall seeing in Maurice Horn's World Encyclopedia of Comics. Wow, that's brilliant Mr Mod sir, clearly Ross had that drawing to mind - thanks for the effort and for joining in.

It's also similar to a Bill Everett drawing of Namor vs the Torch that I recall seeing in Maurice Horn's World Encyclopedia of Comics.

I have loved that drawing since I first saw it in 1982.

Permalink Reply by Mark S. Ogilvie on June 2, 2014 at 3:25pm
It's never really been touched on how old Namor is, maybe because he spent so many years wandering New York without his memory, but he's got to be nearly 80 by now.

This a theory, and just a theory, but maybe mirror images would emphasize how alike they are, and Ross was going for differences. As in: the younger Subby is taking a wild swing, while the older Subby is elegantly gliding by, easily avoiding the punch. Youthful bull-in-a-China-shop vs. older sophistication and experience.

As I said, just a theory.

Permalink Reply by Mark S. Ogilvie on June 2, 2014 at 4:32pm
I'm working on it. But Carol's history is a whole thread in itself. I'm waiting for marvel to reboot and erase most of the stuff that happened. That worked with me and Zatanna, BC and the rest of them.

Can't you forgive Carol, considering what was done to her before?