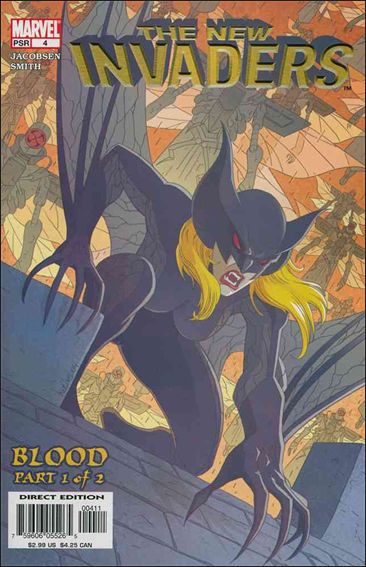 Scott Kolins cover shows a case study of the new big bad Baroness Blood and it’s a good cover, although she looks like she belongs in Batman Inc.

We open with the first appearance of the latest John Falsworth, baby grandson to Invaders Spitfire and her mother, the Baroness Blood.

(I believe she first appeared in a Union Jack mini-series which I confess I’ve never seen (!))

And the cult of blood she has built around herself and the legacy of the little baby.

We see a guy called ‘Nigel’ and Roger Aubrey at a Gay pride Rally in the UK.

They are, of course, attacked by Nazis.
These Nazis however seem strangely ghostlike or vampirey.

The New Invaders are briefed by Aubrey, and the team splits into a main group to fight the Vampires, who are near to Falsworth manor and have Spitfire’s grandson and Namor’s splinter group who continue the fight in Mazikhandar.

The Baroness is glad to hear the Invaders are coming, they have something she wants to make her son…’strong.’

We learn that Spitfire’s son, Kenneth died after Baroness Blood had ‘seduced him’ and set him against Union Jack (that Union Jack series again!) and Kenneth couldn’t be saved.

Union Jack and Aubrey spar over the legacy of the Union Jack name and their relationships with the men in the tights through the years.
Tara cuts through the tension or doesn’t understand the nuances and Jacquie calls lover Joseph – ‘Jim’ clearly still carrying a torch for the. well…the Torch.

Left alone Spitfire sees what appears to be her dead son outside her window and after a crack of lightning the rest of the team find she has disappeared.

Aubrey used to be Dyna-Mite and then the Mighty Destroyer, back in the WWII and our Invaders heyday, Nigel…I have no idea if Nigel is supposed to be anyone we know.

The S&M overtures of the Gay Pride Rally seem a little more that we in the UK are used to.

Nazis – again! Ok we all get it, this series has a legacy from the War, but that doesn’t mean they can only fight Nazis does it? They were borne of a crisis in the Middle East, it can work.

Art in this series has always been dark but here it is so muddy it’s quite indistinct.

Also with the heroes all wearing tee-shirts most of the time and being drawn with very similar features, it is distractingly difficult to tell who is who.
Aubrey’s got a new version of his Destroyer costume which is just as non-descript and dull as the other new-looks around him.

All their red white and blue are starting to look alike.

Aubrey and the team get to know each other at Falsworth manor – as if they haven’t already got together which is odd.

It is alluded to quite bluntly here, that Aubrey/Dyna-Mite/Destroyer and Brian Falsworth/Destroyer/Union Jack did indeed have a homosexual relationship just as its confirmed Joseph Chapman/Union jack and Kenneth Falworth did not have as he is now intimate with Spitfire.

We learn virtually nothing more about Tara – yet again – other than she’s’ incendiary Eve series synthetic’, she desperately needs some plot time.

This issue does benefit from very little Blazing Skull and US Agent who are off with Namor – presumably we’ll catch up with them in later issues, but it’s not an interesting plot we are rushing to see more of is it?

Okay so the Baroness Blood story has roots in the team history and from that point of view, it clearly needs to be told, - but can we then move to some contemporary plotlines for this grouping?

Come back for the conclusion of …’Blood’. Scott Kolins cover shows the new-look urban warfare-esque Union Jack and Spitfire, both unnecessarily revamped for this series and not like the revamp that Kolins had given them before.

There’s a kind of excuse for UJ I mean, you can see the kind of look they were going for here, but this look for Spitfire did her no favours at all and is incredibly dull, something our Lady Jacqueline should never be!.

The story picks up and rounds off last issue’s story of the Falsworth/Chrichtons and the influence of the Vampire mixed with flaming-android blood in the genetic mix.

Having been kidnapped, Jacqueline hallucinates a conversation with her dead son while her friends and family fear for her life back at the ranch manor.

The Torch attempts to calm Union Jack down by assuring him he believes Spitfire is alive – as he can feel her presence due to the transfusion of blood (x2) he had given her before.

Baroness Blood explains to the helpless Jacqueline that she has been instructed by Herr Nacht, leader of the Axis Mundi that a sacrifice is required. Jacqueline still believes she saw her son.

The Invaders attack the vampire bad-guys in the caverns underneath the Manor, where Baron Blood first met his doom.

The Baroness voices what’s going on (– which actually we did need to hear! ) – Whilst the combination of her own genes, the Torch’s transfusion and Baron Blood's bite gave Jacquie her speed and her youth, her son had a blood disorder instead...and so has his son, the baby..

He will require not only his mother the Baroness’s blood but also Jacquie’s!

Spitfire fights free and the rest of the Invaders team converge on her position.

The minions attack but with her blood in them they also have the Torch’s blood and he takes dramatic control of that blood setting them all alight and killing them all dead.!!, except for the baby and the Baroness that disappear.

The battle over everyone returns to  Falsworth Manor where the Torch explains to the team that he had a similar connection to Toro - after the war but with Spitfire it was more intense especially after the second transfusion.

The Torch announces he’s staying with the Invaders until the Axis Mundi are dealt with and he vows to continue the search for Spitfire’s grandson.

The Torch telling Joey “Sometimes I feel as if I’m inside her – when she’s frightened – when she’s excited—“ was probably not the  best way of calming him down – and very suggestive for comics , thus cementing this series as a ‘parental advisory’ type of title – perhaps “MAX Invaders” would have been a better description of this series?

There is a fascinating piece of character information dropped into the fight, it appears Roger Aubrey can shrink his body size, a remnant of his Dyna-Mite power presumably.

It’s a passing comment but it rewards us loyal Invaders readers for all our years of devotion – and for sticking with this …less than classic series.

The Torch reveals or confirms that he lost the power of flight with his flame (back in the Namor issues- remember?)  and he has been afraid of ‘falling’ ever since. – That’s a bit overplaying the character point they're trying to make don’t you think?

The Torch burning all the vampire-badguys is not shown too graphically and actually it’s all a bit vague.

I wonder if that was editorial edict or the writer trying to be subtle.

Why was this intense connection between the Torch and Spitfire never referenced before then if it was so strong and obvious and how come the Torch knew he could ignite his blood in the vampires but couldn’t ‘flame-on’ for all those years…?

The ending spotlighting Joey as Union Jack feels a bit out of kilter, it’s a poignant enough scene but the entire two-parter has been all about Jacquie really and yet ends about Joey.

The Roger Aubrey smelling the flowers at the graveside of Brian clearly is meant to confirm they did have a homosexual relationship – if you want it to.

Art is again muddy dark and confused and it remains difficult to tell who is who in this series.

Oh and android Tara said six words only I think…surely her character must be addressed soon…?

Wow, the further this goes on the more I'm glad I never picked it up.

Permalink Reply by Richard Mantle on April 17, 2014 at 8:48am
Yes Mark. It's not great is it?
Four more issues then onto more popular stuff like Avengers Invaders.
I think there's still a few readers interested enough to read my missives as we go along.
Thanks for hanging on in there...!

I'm always curious but I'm sometimes puzzled why writers go in certain direction and why they ignore other points.

I don't comment very often on this thread but I've read all of the posts.

Permalink Reply by Richard Mantle on April 17, 2014 at 3:26pm
Thankyou Richard. Hang on in there we'll get to better stuff!

I really think that the concept of the Invaders only worked during WW2. I'm not saying that the characters shouldn't have survived, though I think letting a character die a noble death like Bucky or the Torch and then actually letting them stay dead is now so novel a concept in comics that when someone actually does it everyone will be shocked, but what brought them together as a team ended with Hitler. If they had stayed together to fight HYDRA or even the soviet union, evolved into what became the Avengers I think that could have worked better. But with Jackie and Torch it seems marvel was trying to re-create bring Captain America back and I don't think that it worked.

I'm reading, Richard. But, like the other Richard, I don't have a lot to say. This series is almost like "How Not To Write Comics."

I'm still hanging in there, Richard. Like those before me, I really don't have anything to add.

Hang on in there we'll get to better stuff!

I'm going to hold you to that.

One silver lining for me is that I no longer feel ashamed that I don't have a very good grasp of who Union Jack is. Apparently, I have good reason to be confused!