I thought this might be a nice companion thread to "On the chopping block," where we can talk about currently running books that we're thinking of picking up in the middle of their run.

The one that comes to mind for me is Firestorm. Dan Jurgens is taking over with issue 13, and he purportedly is treating it like a first issue. Most of the "international firestorms" storyline is over with -- don't ask me how -- and it's apparently going back to being Ronnie and Jason in high school together, teaming up to be Firestorm. Which is what I wanted to read in the first place, so it's probably a good time to give it a chance.

So, any books you're thinking of hopping on to?

I haven't read Edison Rex, but the arch-enemy becoming a hero sounds like Mark Waid's Incorruptible spin-off of his Irredeemable. The arch-enemy (Max Damage) becomes a straight arrow in reaction to the Superman figure (Plutonian) losing his mind and becoming a mass murderer.

I'd say the difference is that Edison Rex is a little more tongue-in-cheek--no, a lot more tongue in cheek.

I haven't read Edison Rex, but the arch-enemy becoming a hero sounds like Mark Waid's Incorruptible spin-off of his Irredeemable. The arch-enemy (Max Damage) becomes a straight arrow in reaction to the Superman figure (Plutonian) losing his mind and becoming a mass murderer.

I figured this would be as good a place as any to talk about the latest issue of Saga. All I'm going to say about this issue is that there was one scene involving Lying Cat and Sophie (formerly Slave Girl) which made me call in love with this book about ten times more than the "pretty good" status it carried with me before.

Absolutely. Man, that scene was good.

I spent this long weekend at the beach, where I read a ton of comics digitally. One of the best things I read was today at the airport, where I had the sheer pleasure of enjoying the first three parts of a comic by Gabriel Hardmann. It's called Kinski. No super-heroes, nothing paranormal at all, but it is simply enthralling. The artwork is absolutely beautiful in its simplicity. Hardmann is very subtractive here, sometimes drawing only the shadows of his figures. They are no less detailed, somehow, than his fully rendered illustrations.

Seriously, go read this. It's hard to give a quick elevator pitch on this one, but I'll try. A salesman finds a lost dog that he wants to keep. He finds this to be a difficult to do so. It sounds pretty innocuous, but it really grabs you and keeps your finger swiping the screen again and again, waiting to see what happens next.

This is so well written and so well told... I have no idea how many issues this thing will last, but I am in no hurry. I want to hang out in this world awhile longer. The only thing I am in a hurry for is the next issue. 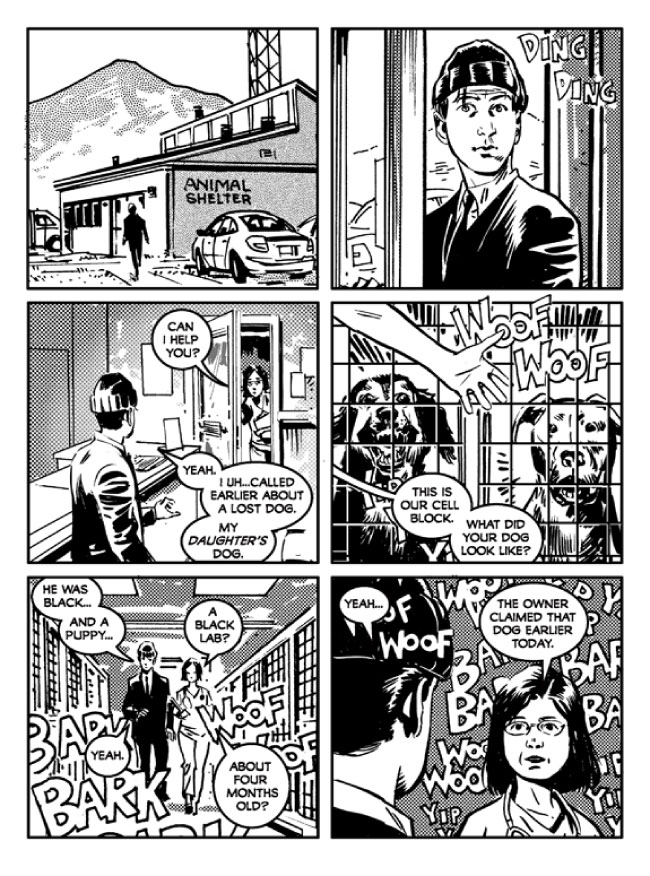 I second the Kinski recommendation. I downloaded the first issue last night and enjoyed it so much I plan to download the next two tonight. When I went looking for it (it's from Monkey Brain; I bought it at Comixology) I discovered there had been a very positive review of the first two issues on The Beat back in June. Which I didn't pay much attention to at the time, since I didn't have my tablet yet. So thanks for the tip, Sensei!

I'd heard of it -- I think I saw a picture of the dog, with the name KINSKI -- but didn't know much about it. Thanks for the heads up!

Absolutely, Rob and Mark. I feel this strongly about very few titles, even those I really love. We've all read tons of super-hero and even weird Vertigo tales. This is a true original. This is slice of life at its most profound. Somehow simple and yet complex in its storytelling simultaneously.

I read Issues 2 - 3 of Kinski at lunch today, and I'm completely hooked. Can't wait to see what happens to the guy and the dog. I signed up for a subscription at Comixology so I won't miss an issue. First time I even thought about doing that!

I'll definitely be looking into it on my next Comixology purchase!

Something new to look at is Red Circle's The Fox.  For those of you that don't know, the Red Circle imprint is a rejuvenation of the old MLJ/Archie superheroes.  The Fox is a newspaper reporter who started dressing as a superhero to find stories, and the premise of the updated comic is now he can't stop finding stories.  It's light-hearted and fairly tongue-in-cheek, and a breath of fresh air in today's comics climate.

Also, if you aren't reading Adventures of Superman why?  Easily the most iconic Superman stories I've read in a very long time (this includes All Star Superman which I have to say never impressed me that much), it's short stories--three issues at most so far--and you can pick it up wherever and whenever you like.  The current story involves Krypton's Green Lantern locating Superman and begging him to kill him for failing Krypton.  Great stuff.