Other Guys of the Silver Age: Son of Vulcan

Charlton's "Son of Vulcan" feature debuted in Mysteries of Unexplored Worlds #46 in Mar. 1965. It was retitled Son of Vulcan with #49 and ended with #50 in Nov. During the run the title appeared bimonthly.

Mysteries of Unexplored Worlds #46 has an ad for Charlton's action heroes titles. It has an image of Son of Vulcan that takes up a bit under half the page. The other features listed are "Captain Atom", "Blue Beetle", "Jungle Tales of Tarzan", "Sarge Steel" and "The Fightin' 5". 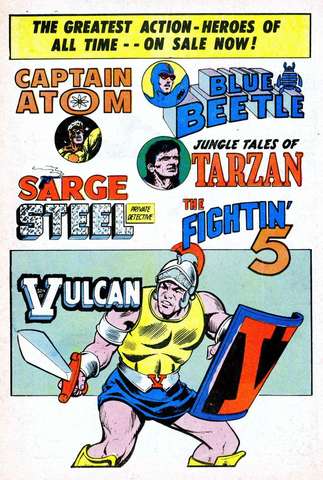 At that point "Captain Atom" hadn't quite been revived. Reprints commenced in Strange Suspense Stories the next month, and the character's new series started in Oct. The star of "Blue Beetle" was the scarab-powered one. He had debuted nine months earlier, in Jun. 1964. Jungle Tales of Tarzan quickly ended. The title was unauthorised, and Tarzan wasn't in the public domain.

Judomaster made his first appearance in Special War Series #4 the month Son of Vulcan ended. Charlton's next mythological hero series was Hercules, but it didn't commence until Aug. 1967.

DC never quite figured out what to do with Son of Vulcan, did they? I think he would be a great character in the modern day. I remember for a little while there he was treated like he was going to be a big deal.

Side note: In this comic, was Tarzan played by Johnny Cash?

Son of Vulcan can be remembered for a few other reasons.  The cover of #49 notes that his new costume was designed by Dave Cockrum, and #50 features Roy Thomas first professional script (I can’t remember if it was his first sale or the first to be printed).  Charlton seems very fan friendly. 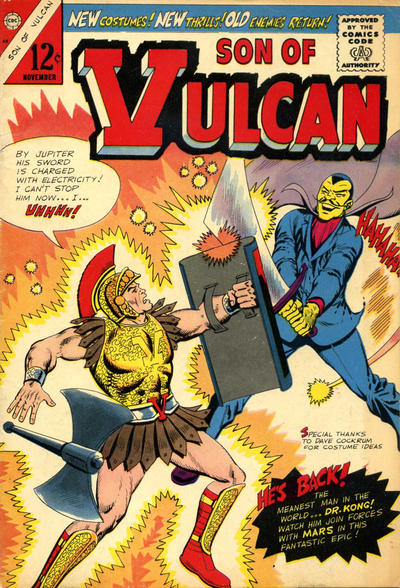 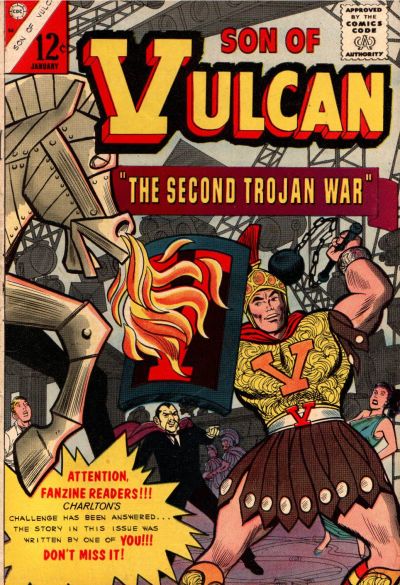 Wow! I even own that top book, but haven’t looked at it in probably 40 years.

Today Son of Vulcan is best known as the Charlton Guy NOT put into Watchmen!

I know you're joking, Philip, but there are actually a lot of Charlton characters that weren't used in Watchmen -- which I think is important to remember, because they are available for TV's Watchmen or Doomsday Clock. The latter, for example, snapped up Punch and Jewelee and gave them the Watchmen treatment as Mime and Marionette.

I've long wanted to make a list of available Charlton characters, and this is as good a time as any.

Blue Beetle I (Nite-Owl I)

OTHER WATCHMEN CHARACTERS WHOSE ORIGIN IS UNCERTAIN

Impy the Ghost (host of Haunted)

Kuno (a third century Goth released from suspended animation in Doomsday + 1; the other three members of the team are Captain Boyd Ellis,  Jill Malden and Ikei Yashida)

Prankster, The (one appearance in Thunderbolt)

Scorpion, The (Blue Beetle I villain)

Ghost, Dr. Spectro and Iron Arms had more than one appearance in Captain Atom, so they are "major" villains. Also, Charlton bought a bunch of properties from Superior Comics, Mainline Publications, St. John Publications and Fawcett in 1951 -- most of which were war, Western and romance, but I don't really know what all was in those packages. Also, some of these characters are marked "Golden Age" when "1950s" would be more accurate, but I didn't distinguish because I don't care. Finally, I included Ditko's Mysterious Traveler, butdon't know if he created any other horror hosts for Charlton -- I feel one scratching at the back of my brain, but it may have been for another company.

I didn't include licensed characters, but those include The Phantom, Mandrake the Magician and Flash Gordon.

Gunmaster & Bullet (imagine them transported to the 20th/21st Century)

At the time (1973), I thought Sewer Patrol could be expanded into a series. 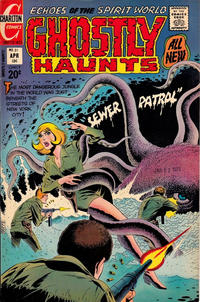 Here's another group of characters in the Silver Age: 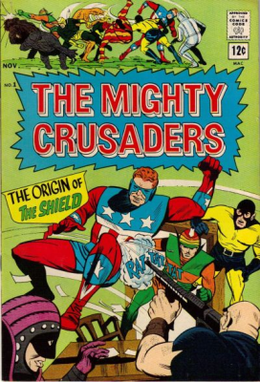 Archie tip-toed back into superheroes (after the MLJ superheroes disappeared in the '40s) in 1959 with:

But in 1965 Archie decided to jump into superheroes in a big way -- which, after the success of the Batman show (1966-69) quickly became super-camp. Mostly written by Jerry Siegel and mostly drawn by Paul Reinman, the new superhero line was soon named Archie Adventure, and then Mighty Comics. And it was quickly canceled. Titles included:

Hmmm, “Sewer Patrol” doesn’t show up on my iPad.  Here it is again. 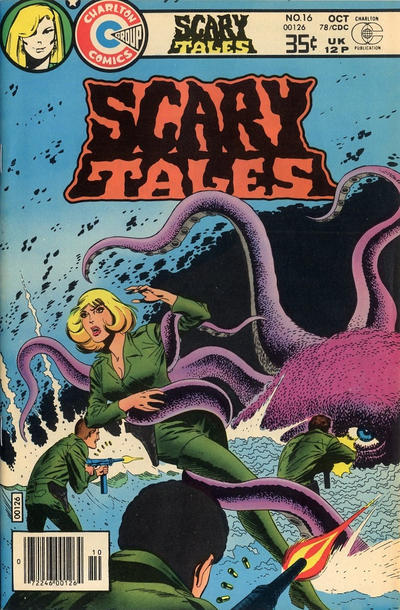 Harvey also had a number of short-lived superheroes from the mid 1960s, in addition to Black Cat, Spirit, and Fighting American reprints.  There was at least one new Spirit story.

Just think what fun we could have including ACG, Lightning, and IW/Super (Doll Man, Plastic Man, The Avenger, Dynamic Man, Blue Beetle).

Fly Man was rebranded as Mighty Comics with #40 (N'66) as an anthology of sorts with a rotating cast that gave some other MLJ heroes the spotlight. It lasted until #50 (O'67) with Jerry Seigel trying to channel Stan Lee.

#45--Shield II, the Web, Hangman (revived as a villain but now a hero again)

#50--Black Hood, the Web with Inferno