Hello All! Our friend and longtime Legionnaire Rich Lane is having health issues, and could use any help that anyone can give. Per his son, Patrick, "He won't be able to be at full strength again and will need someone to be with him for the rest of his life."
Rich has started a GoFundMe , if anyone is in a position to help out financially.
No pressure, I know what it's like to be skint and just getting by yourself, but anything you can do would be appreciated

I'm so sad. I've been thinking about Rich a lot as this has gone on. He was one of a kind, and I'll miss him.

My condolences to his family and friends.

Deepest sympathy to his family and friends, especially those friends who are here.

Rich's illness and quick passing have been hard to digest.  I have been going back through years of Facebook messages today.  We started out as friends here (or "on the 'old board'"), but our conversations would range from politics (of course) to religion (of course), film, music, literature, and so many other topics.

There are many notes where Rich referred to me as his "brother from another mother."  At some point long ago, we discovered we had both been initiated into the Pi Kappa Alpha fraternity in college, so that was a source of much in-joking.  But the "brother" jokes would have happened because of the friendship we developed from here, not because of shared fraternity rites from 30-something years ago.

Rich loved Jimmy Buffett, and got a huge kick out of the fact that I could claim to have eaten dinner at the same table where Buffett wrote his book Tales from Margaritaville.  We had so many close misses in our lives--he and my wife were both dedicated high school English teachers;  the Buffett semi-connection;  the fraternity thing;  and the past two years or so spent exchanging, of all things, cat pictures.

I will miss my friend.

PS--to Adam Benson--Commander, I wish I were as eloquent as you are, sir.  Your tribute was outstanding.

I hadn't communicated much with Rich over the last several years, for reasons that don't matter now.  Several months ago, he sent me a friend request.  I accepted.  Whatever differences we had on various things didn't matter to me anymore.

And now I hear this, and I am saddened.

My condolences to his family and friends.

Fifteen years ago, my family swung by Rich's house on a return trip from Thanksgiving in Ohio, just to say hi. He welcomed us in, let us pet the dog, traded stories and sent us on our way with surplus Thanksgiving food that he retrieved from his freezer, carefully stored in gallon Zip-Loc bags (an idea that had never occurred to us, but one we've emulated ever since). Unfortunately, we did not meet his wife Dolores, and I don't recall where she was at the time. 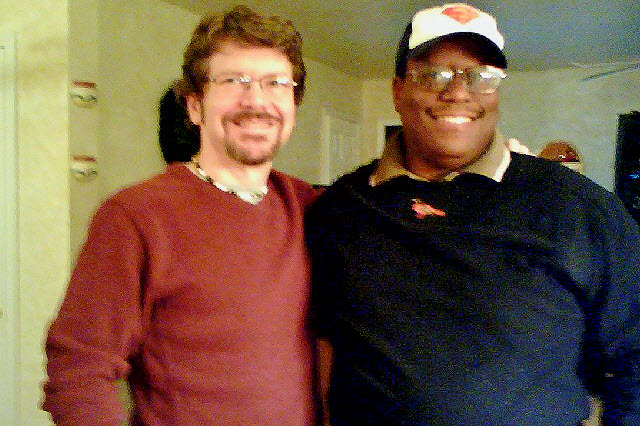 We were friends from the days of "the old board," which is a wonderful place to be when you've spent your entire life not knowing anyone who shares the four-color joys to be found between the covers of your favorite comics. Indeed, Rich had a lot to do with getting this iteration of the board up and running -- and going.

But Rich's passions and interests weren't just about comics. He was a teacher, and the kind who believed his role was to get his charges to know how to think. He's told many stories here about his life and the experiences that shaped him -- days of grinding poverty, oddball jobs including being a bouncer and a repo man, getting the living snot beaten out of him when he was jumped by four guys, getting his weight under control by undergoing gastric bypass surgery, being an atheist but finding the love of his life in a devout Catholic who is Mexican, being a liberal deep in conservative surroundings, and above all, being true to himself and not kowtowing to those who react to disagreement by silencing the dissenter.

Rich was going to be the dissenter, all right; every few weeks he would post on Facebook about how he'd done his time in "Facebook jail" with the reminder to one and all that you're free to dislike what he says on his page, but not free to shut him down there.

Looking at his member page, I was a bit surprised to see Rich hadn't posted here since 2013. We certainly haven't been short of his wisdom. and are poorer that he won't be able to provide more of it.

I was trying to figure out how to say it, but I can't remember any posts from him, and I've been here since 2012. I wish I'd had what seems to be the pleasure of his postings.

Looking at his member page, I was a bit surprised to see Rich hadn't posted here since 2013. We certainly haven't been short of his wisdom. and are poorer that he won't be able to provide more of it.

Rich and I were born nine days apart. I reached my 58th birthday last week; now he never will. Rich was one of the first guys I got to know on the "old board." When I first joined, I just used the board's software's generic avatar. After a couple of weeks had passed, he designed one for me! He sent a PM and said something along the lines of, "Hey, I noticed you don't have a personalized avatar. If you like this one, feel free to use it." (It's not the one I use now, but it was a Earth motif with the words "Jeff of Earth-J" in a kind of ST: TNG font.) We have been friends ever since.

I met Rich (and Patrick) for the first time at a Pittsburgh comic con in the early 2Ks. Mark Waid was the featured guest (one of them, anyway), but Tracy and I were there specifically to meet Rich. We met up, kind of drifted our separate ways, then went out to dinner afterwards at a chain restaurant near our hotel. I'm usually an "eat and leave" kinda guy, but we sat there for hours after we ate, drinking them out of iced tea.

A few years later, my niece graduated nursing school from Gannon University in Erie, PA. Titusville is midway between Erie and Pittsburgh, so Rich offered to put us up for the night. (It was this trip when we met Dolores.) We didn't get a lot of sleep that night, and the drive to the airport (we took the unfamiliar winding backroads) was treacherous in heavy fog. Even though we were so late we had to turn in our rental car without refilling the tank (ouch!), we made some great memories that night I would not trade for anything.

Since Rich drifted away from the board in favor of Facebook, I have kept in touch with him mainly vicariously through Tracy, and she has become as close to him over the course of last decade as I had been previously. The world will be a poorer place without Rich in it.

Richard Willis replied to Jeff of Earth-J's discussion T.H.U.N.D.E.R. Agents
"IDW: As I suspected (and feared), IDW's THUNDER Agents was a complete reboot. I…"
24 minutes ago

Luke Blanchard replied to Jeff of Earth-J's discussion Tales to Astonish
"For the bulk of his first story the Stranger is our size. He turns into a giant when he reveals…"
1 hour ago

Richard Willis replied to Steve W's discussion A Cover a Day
"Talk of copying reminded me of this court case. The cover of this comic uses a photograph of singer…"
5 hours ago

Irma Kruhl replied to Steve W's discussion A Cover a Day
"Yep, Adkins sure took Wood's advice to heart--not surprising at all, since Adkins started out…"
10 hours ago

Richard Willis replied to Jeff of Earth-J's discussion T.H.U.N.D.E.R. Agents
"As I mentioned, I began tradewaiting with DC v2. Consequently, as a tpb of DC v2 was never…"
10 hours ago

Dave Palmer replied to Steve W's discussion A Cover a Day
"That's amazing. Wally wood did say "Never draw anything you can copy, never copy anything…"
10 hours ago

Lee Houston, Junior replied to Steve W's discussion A Cover a Day
"I'm sure she's still around the Marvel Universe(s) somewhere. (Image courtesy of the…"
11 hours ago

Richard Willis replied to Jeff of Earth-J's discussion T.H.U.N.D.E.R. Agents
"NoMan says that the enemy now has “a cloak,” while wearing a purple version of the…"
11 hours ago