Painting of the Day

I've saved the original thread, and I'll transfer the posts across as time permits.

Painting of the Day (original series):

Winter by Nicolas Poussin, a French painter of the 17th century who worked for most of his career in Rome.

This is one of his series The Four Seasons, painted near the end of his life. Each depicts a Biblical scene. In this case the subject is Noah's flood. You can see the Ark in the background on the left.

This is Portmerion, Wales ("The Village") by Rob Piercy. 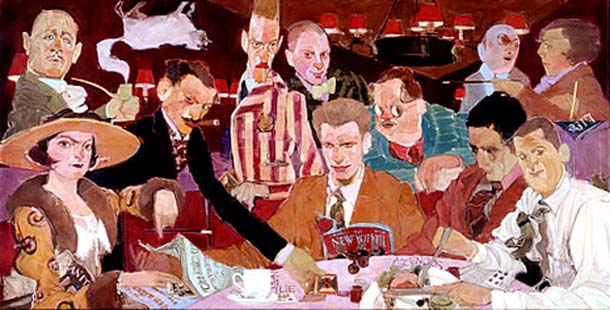 In 1919, at the end of World War I, a group of New York City writers gathered at the Algonquin Hotel in midtown Manhattan for a lunchtime "roast" to celebrate the return of theater critic Alexander Woolcott from his service as a war correspondent. Thus began a decade-long daily ritual for some of the era's most prominent artist-intellectuals. Dubbed "the Algonquin Round Table," regulars included Woolcott, writer and critic Dorothy Parker, playwright George S. Kaufman, actor and screenwriter Robert Benchley, novelist Edna Ferber, performer Harpo Marx, and Harold Ross, founder of The New Yorker magazine.

Steve W replied to Steve W's discussion A Cover a Day
"These Kubert covers are really amazing. I always knew that…"
2 hours ago

Philip Portelli replied to Steve W's discussion A Cover a Day
"I don't have this one but now I want it! Kubert's take on El Diablo!"
5 hours ago