Oct. 1, 2013 -- Papercutz bills itself as “the industry’s leading children’s graphic novel publisher,” and – judging from its current output – that could very well be true.

Once upon a time that title would have gone to Harvey Comics, which transitioned from horror titles in the 1950s to titles like Richie Rich, Casper the Friendly Ghost and Baby Huey. Those titles – and those characters – are long gone, replaced by the likes of Annoying Orange, Geronimo Stilton and Disney Fairies, all published by Papercutz. 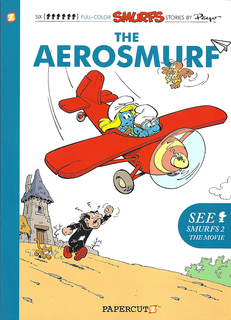 Not to mention the Smurfs! That might elicit a groan from some American adults, based on the irritating and saccharine cartoon. But Papercutz is reprinting the original European comics from the legendary writer/artist Peyo, which are far more sophisticated than the U.S. version, not to mention a lot funnier.

Papercutz has two Smurf collections out currently, both worthy of consideration. The Aerosmurf ($5.99) is Vol. 17 in the ongoing reprint series, and includes not only the title story, but also “The Masked Smurf,” “the Firesmurfs,” “Gluttony and the Smurfs,” “The Smurf and His Dragon” and “Jokey Smurf’s Pranks.”

The second collection, The Smurfs Christmas ($5.99) doesn’t have a volume number; as a collection of holiday-themed stories, one assumes it is meant to be an evergreen seller. And there are plenty of heart-tugging tales therein, including “Little Peter’s Christmas,” “The Ogre and the Smurfs,” “Strange Snowmen,” “Hibernatus Smurfimus,” “The Little Tree” and “The Smurfs Christmas.”

Granted, there’s usually a moral or lesson to be learned from these tales, but they’re not so obvious as to be painful.  The focus is on action and humor, where it belongs. For example, in “The Aerosmurf,” our lead Smurf learns the hard lesson of being careful what you wish for, when he achieves his dream to take to the air. But while he faces unexpected consequences, he also copes with those challenges in an admirable fashion, as well as paying appropriately for his mistakes (at the hands of Smurfette). All in all, there’s a lesson in there somewhere, but “The Aerosmurf” is mainly a kid-size adventure story.

Another recent Papercutz release is Power Rangers Megaforce Vol. 3: Panic in the Parade ($7.99). The main story (there’s a back-up starring the Black Ranger) is an examination of trust, and I was genuinely surprised when one of the Rangers learned that not only could trust be rewarded, but betrayed as well. In other words, the real lesson wasn’t that trust is good, but that it needs to be invested wisely. That’s a pretty a sophisticated and useful lesson for tweenagers, who I imagine to be the target audience for this book.

I also believe that to be the audience for the hardcover Thea Stilton Graphic Novel Vol. 2: Revenge of the Lizard Club ($9.99). Thea is a relative of Geronimo in some fashion, but he never makes an appearance. This adventure is entirely Thea’s, set entirely in her high school, during an election which brings out the mean girls (and boys), and the title character and her friends, which are naturally the “good” teens. As I read this story, I could easily imagine it as taking place in an Archie book, with the Riverdale gang taking the place of Thea and her friends. That’s a compliment, by the way, as well as a clue what audience would enjoy this.

Meanwhile, Papercutz has released two more books at opposite ends of the age scale.

Tinker Bell and the Lost Treasure ($7.99) is for younger readers, in which the familiar character from Peter Pan goes on a quest to replace a magic object she has accidentally broken. Actually, Tinker Bell hurts a lot of things in this story, including feelings, because she’s really a spoiled brat throughout. I found that surprising – aren’t we supposed to like her? – and found myself more invested in her comeuppance than I expected. And when it arrived, as we knew it would, she took her lumps and made some friends in the process. I’m as cynical and jaded as any comics fan, but even I felt like this story hit the right notes.

Finally, Classics Illustrated Deluxe #10: The Murders in the Rue Morgue and Other Tales by Edgar Allan Poe ($13.99) is undoubtedly for older readers, possibly high school age. After all, that’s the age where I knew kids who used Classics Illustrated and Cliffs Notes in lieu of actually reading the assigned material. Not that I ever did that, but you know, you hear things.

And I supposed this book could be used for that purpose, because this adaptation includes virtually all of Rue Morgue, even the boring set-up parts where we learn just how smart C. Auguste Dupin is. In case you didn’t know, Rue Morgue is considered the first detective story, and Dupin is the model for later armchair detectives, notably Sherlock Holmes.

The “Other Tales” in the title refers to adaptations of The Gold-Bug and The Mystery of Marie Roget. Both of these are “tales of ratiocination,” as Poe called his detective stories, and Marie Roget also stars Dupin. (The hero-slash-narrator of Gold-Bug is unnamed.) All three are lushly illustrated in – ahem – classic styles.

And all of these books are far more sophisticated than the kids’ books of my own long-lost youth. They are not necessarily better, I’ll say quickly for those with fond memories of Casper, but they cover the same ground and are a lot more polished. I recommend them wholeheartedly for kids, as they say, of all ages.

Papercutz also has a series of LEGO NINJAGO books, I know this because I volunteer in a reading program for kids at a local school and one of the boys I was working with last year was interested in them. So I bought them. Jim Salicrup is the evil genius behind this line--which rings bells for me if no one else. I just recently returned to volunteering for this school year and feeling guilyt that I had all the NINJAGO books at home, I offered to donate them to the school library--and the librarian was ecstatic to have them, because they are wildly popular with kids.

Personally I find the comic art kind of bad and difficult to follow--but I'm old.

I reviewed one of the Ninjago books in a column a month or so ago. I'm just amazed that such a thing exists. I guess it's not that far a stretch from G.I. Joe -- a series based on a toy -- but given how distorted Legos make the human characters it feels like a stretch. And does Lego get a cut of the profits? Or do they just consider it free advertising?