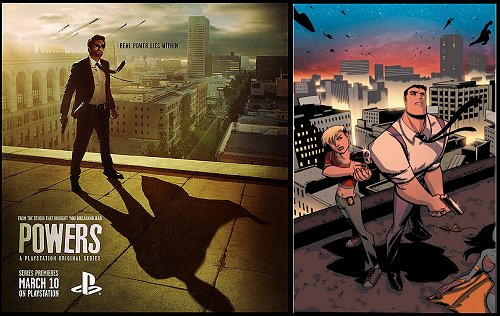 After the TV series pilot submitted to the FX network was not picked up a second pilot with an entirely new cast was picked up by Playstation. It will be the first original program offered on Playstation, debuting March 10, 2015.

Unfortunately it appears that to see it one must have Playstation. Hopefully it will eventually be available on DVD. There is a trailer on YouTube. It's a minute and a half. The commercial in front of it is just that:

That is a weirdly unattractive cast. Maybe it's just me.

I hate to prejudge the Playstation version, but I was happy with the first cast for the first pilot. The character of Retro Girl was called that because the public saw her as an old fashioned sweet-natured person. They had Carly Foulkes of T-Mobile commercial fame set to portray her. The Michelle Forbes version looks a little hard-edged. Here's what's left of the website for the first pilot:

Good grief! They traded Foulkes for the girl above? Too bad. They all look a little too rough, including Retro Girl.

At least they had the sense to keep Deena Pilgrim petite. Her race is inconsequential, but her small stature was a deliberate contrast to her personality and needed to be retained for her to be the same character.

According to the latest TV Guide, when Powers debuts on March 10 the first episode will be available to everyone for free streaming on YouTube and on PlayStation.com. It may be necessary to set up an account on their website to watch it on PlayStation.com.

So far I haven't seen anything to tell me how much the following episodes will cost. There will be ten episodes released one-a-week on the website PlayStation.com. PlayStation systems will apparently get three episodes up front followed by weekly releases.

The first episode of Powers is now available on YouTube for free viewing. It is 53 minutes:

I just finished watching the first episode on YouTube. As expected it has had many tweaks from the Powers comics. As rough as the comic is it's raunchier. Swearing is probably over-emphasized and they have an R-rated way of jump-starting powers. Sex acts are referred to but not actually depicted. All kinds of warnings are provided before watching the program.

Still no idea if the show is free with a PlayStation membership or if there is an additional fee for watching it.

Playstation.com lists the following membership fees for Playstation Plus, which I assume is what one would have to join:

Since there are ten episodes I don't think the free trial and a single month membership would cover the season. If anyone on the Round Table currently belongs to PlayStation please chime in with more info on pricing, etc. It appears that to create an account one has to set up what they call a "wallet," which I assume means turning your credit card information over to Sony(!).

Pretty much my take on it as well.

According to Amazon, Season 1 will be released on DVD on July 14. Presumably Netflix will have it as a rental disk shortly thereafter.

Permalink Reply by Wandering Sensei: Moderator Man on July 7, 2015 at 5:41am
I have literally heard zero about the quality of this show.