Sure, a lot of movies and TV are based on comics these days. But as a lot of the current genre material demonstrates, that leaves a lot of wiggle room for directors and showrunners. 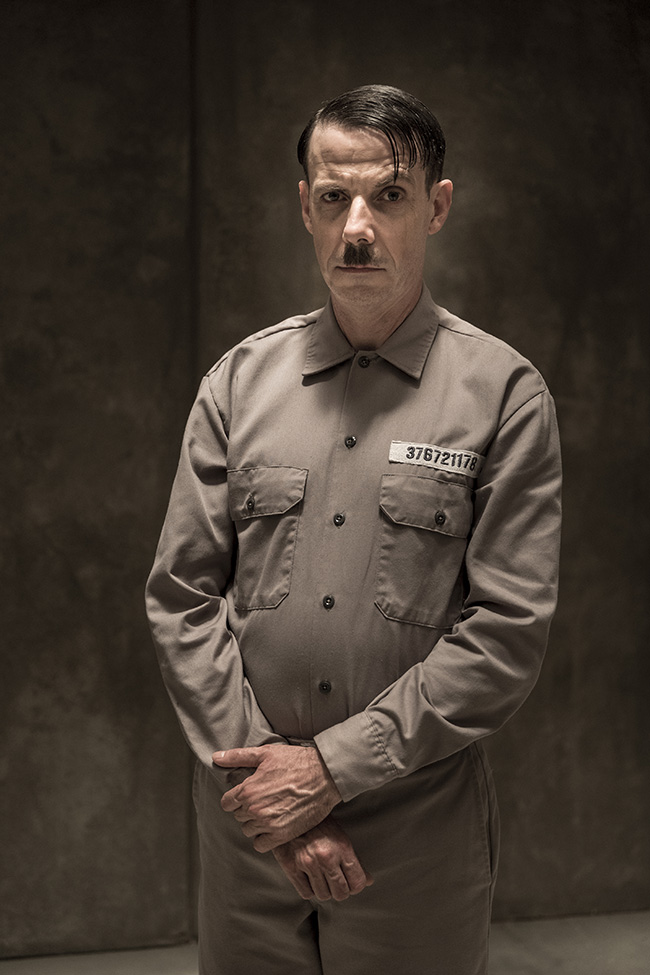 Adolf Hitler (Noah Taylor) is a supporting character in Preacher the TV show, but not “Preacher” the comic book.

Preacher, which came to the end of its second season on AMC Sept. 11, is a case in point. It follows the tone, themes and broad narrative of the DC graphic novels, but veers widely from the specifics established by Garth Ennis and Steve Dillon in the comics.

Both comics and TV have the same premise: Two-fisted, hard-drinking preacher (and former criminal) Jesse Custer gains “The Word” – the ability to command people – and goes on a road trip with assassin/girlfriend Tulip O’Hare and Irish vampire Cassidy to find God, who has apparently abandoned his post.

So far, so good – the TV show follows that basic road map, at least in the second season. The first season, which acted as a prologue, was mostly invented for TV – except for Odin Quincannon, who appears as an equally sick character later in the comics.

However, the specifics in the two media are entirely different:

And so on. Like The Walking Dead, another comic-inspired show on AMC, Preacher is faithful to the comic book in broad strokes, but invents its own secondary characters, digressions and plots. While the major events still occur, the details of the set-up change. 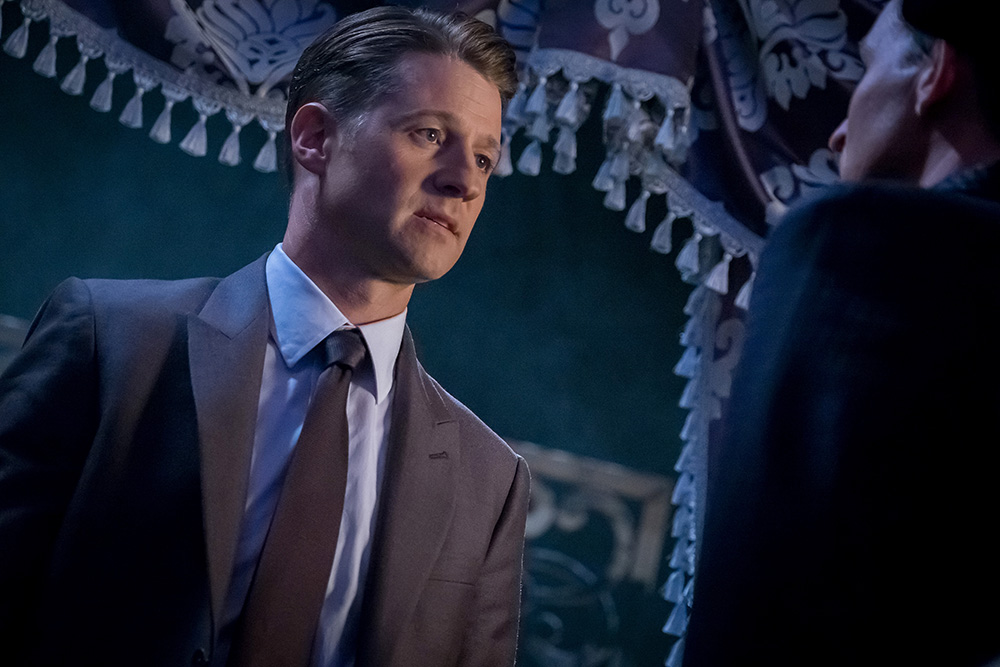 James Gordon (Ben McKenzie) appears in Fox’s pre-Batman Gotham, but in most comics dealing with the issue, he doesn’t come to Gotham until around the time the Dark Knight appears.

Meanwhile, Fox’s Gotham returned to the air for its fourth season Sept. 21. Once again, it’s a premise that will seem familiar to readers of Batman comics but isn’t a faithful photocopy.

Gotham is set before Batman debuts. If it showed fealty to the comics, that would be a fairly boring premise.

What we know about pre-Batman Gotham in the comics is that it had a lot of crime, but it was of an ordinary sort. Organized crime families such as the Bertinellis, Falcones and Maronis bedeviled the Gotham City Police Department, which didn’t have Jim Gordon – he was in Chicago, according to Batman: Year One. And Bruce Wayne, at least for the last 5-10 years (it varies) before he donned the cowl, was traveling the world learning the skills he’d need as the Dark Knight.

In Gotham the TV show, the city is much more colorful place. We do get Carmine Falcone (John Doman) and a few other garden-variety gangsters, but we also get a hefty dose of supervillains who don’t appear in the comics until after Batman begins his crusade.

That includes Mad Hatter (Clare Foley), Mr. Freeze (Nathan Darrow), The Penguin (Robin Lord Taylor), Poison Ivy (Maggie Geha), The Riddler (Cory Michel Smith), Hugo Strange (B.D. Wong) and others. This season will also include super-strong, quasi-zombie Solomon Grundy (Drew Powell), who began his comics life as a foe of the original Green Lantern in the 1940s, and is more of a Justice League villain than one that is Batman-specific.

Gotham also includes, as noted, a pre-Commissioner Jim Gordon (Ben McKenzie). We also meet Harvey Bullock (Donal Logue), who doesn’t appear in the comics until 1974, and Lucius Fox (Chris Chalk), who was introduced in 1979. Bruce Wayne (David Mazouz) becomes a vigilante this season as a teenager, which contradicts the comics as well.

Finally, Gotham is giving us prototypes for famous villains who may come along later, or may evolve from these earlier versions. We have a proto-Joker in Jerome Valeska (Cameron Monaghan), who is dead, but has already come back from the dead once, so don’t count him out. And Tabitha Galavan (Jessica Lucas), who looks and acts very much like Catwoman, has taken as her protégé young Selina Kyle (Camren Bicondova), who is destined to become Catwoman.

In short, there is no way to square Gotham with the various histories of Gotham and her citizens in the comics. It’s essentially a parallel world – which, luckily for Fox, is something comics fans are very accustomed to. 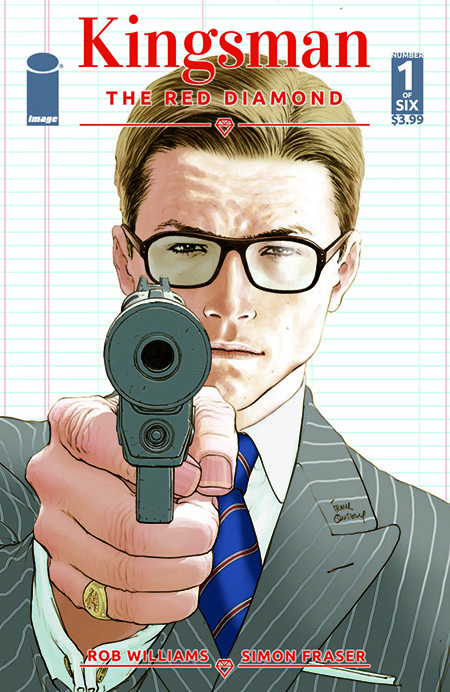 But, while Golden Circle continues the characters, themes and tone of Secret Service, it isn’t a sequel to the graphic novel. In fact, when “Golden Circle” was conceived, no comic book sequel existed.

Into that void marched Rob Williams and Simon Fraser, who have launched a Secret Service sequel at Image Comics. Kingsman: The Red Diamond is very definitely a sequel to the graphic novel by Millar and Gibbons. But it has only a tengential connection to Golden Circle, in that it stars the same characters.

Golden Circle teams Eggsy (Taron Egerton), Harry Hart (Colin Firth), Merlin (Mark Strong) and the rest of the “Kingsman” gang with their American counterparts, the Statesmen. The Statesmen are played by a number of big names, including Halle Berry (Ginger Ale), Channing Tatum (Tequila), Jeff Bridges (Champagne) and Pedro Pascal (Jack Daniels). The bunch of them will battle international criminal Poppy Adams (Julianne Moore), who is associated with the criminal organization The Golden Circle.

Red Diamond, on the other hand, has none of those American characters in it. The six-issue miniseries is described as a “unstoppable, action-packed miniseries contains violence, explosions, flying wingsuits and vintage jets,” and takes Eggsy to China. But it’s a social commentary, too. Eggsy has difficulties with the UK class system – he’s too posh for his former friends, and too blue collar for his fellow Kingsmen.

All of which should be considered a feature, not a bug. The comics and TV versions of Preacher, Gotham and Kingsman are two different experiences involving what amounts to unapologetic variants of the same characters. I call that a bonus.