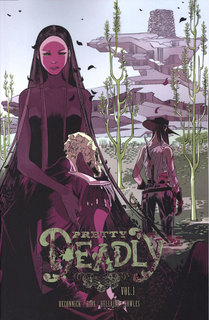 Kelly Sue DeConnick has made her name primarily writing Marvel superhero comics, so this occult horror Western caught me completely by surprise. This is not only a completely different genre, but a completely different style of story telling as well. It has been compared to both Sandman and Preacher--hard to avoid with the Western setting and Death as a character--but I would also point to The Sixth Gun as a more contemporary reference point, although I have no idea what may have influenced DeConnick and Rios.

Each issue begins with a dialog between a butterfly and a rabbit (which continues just the same after the rabbit is killed and has decomposed into a skeleton). That alone would tell you we're not in familiar territory, but the human characters turn out to be nearly as strange. Death's daughter Ginny rides the wind on a horse made of smoke, with a face bearing her father's skull marks. Much of this first story arc (Issues 1 - 5) revolves around her origin story.

The characters are introduced without prequel or explanation. I found the first couple of issues rather hard to follow, and I mean that in a good way. My patience was rewarded in the end. An unexpected, intriguing series, which I intend to follow for awhile to see where it leads.

I have the first issue of this on Comixology.  I'm sure I read it but I'll be darned if I can remember anything about it, so I would say I'm due for a re-read.

I didn't say much about co-creator Emma Ríos's art in my review, but of course it plays a huge part in the tone of the story. She is a Spanish artist whose work in the U.S. market has often had supernatural themes: she penciled Hexed for Boom! Studios, and illustrated the Dr. Strange limited series written by Mark Waid (Strange) for Marvel.

She employs a loose, impressionistic drawing style here. In the Vertigo world, she would be more like Dean Ormston than Mark Buckingham. It can become very kinetic, where movement on the page seems more important than the details.