Psychiatrist gets into heroes' heads in 'Superhero Origins'

Aug. 26, 2013 -- Back in the days before Hollywood made comic-book stories familiar to the masses, and most folks thought superheroes were kid stuff, we comics fans knew better. We knew that certain characters told some universal truth, or touched a vital nerve in the human psyche. 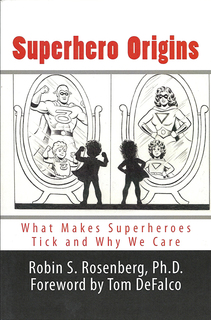 But lo, we wandered the wilderness, knowing this vital truth but fearing to speak it, lest we tempt ridicule. And comics publishers avoided a high profile for fear of persecution, after psychiatrist Fredric Wertham’s infamous 1954 screed against comics, The Seduction of the Innocent, helped lead to mass comic-book burnings and nearly the end of the industry.

But how things have changed! Superheroes are boffo at the box office, comics are no longer lazily dismissed as kidlit … and like a phoenix, the anti-Wertham has arisen. Yes, comics fans have a champion of their own now: Professor, author and clinical psychologist Robin S. Rosenberg, whose latest book confirms everything we knew in our hearts to be true.

“The best origin stories [of superheroes] feel psychologically ‘right’,” Rosenberg says in Superhero Origins: What Makes Superheroes Tick and Why We Care (CreateSpace, $12.59). “Many of these captivating stories reflect certain aspects of human psychology that were confirmed by psychological research decades later.”

Yes! We knew it! But Rosenberg doesn’t stop there: She brings her considerable erudition to bear on superhero origins to explain all the stuff we didn’t know.

For Superhero Origins, Rosenberg uses a cross-section of characteristics to come up with seven superheroes to discuss. She wanted both super and non-super characters; some created in the Golden Age and some a generation later; heroes both male and female; characters primarily from both comics and TV; origins both well-known and obscure; heroes who launched from both physical trauma and psychological journey; and those whose origins have changed over time. The list she came up with to cover all this ground consisted of Batman, Wolverine, Wonder Woman, Iron Man, Buffy, Spider-Man and Green Arrow.

And in each case, this 50-year comics fan learned something new. On Batman, fans still debate whether he’s on a quest for vengeance or trying to save others from suffering as he did. Rosenberg cuts through the clutter: “He is trying to make sense of the senseless and random murder of his parents and of his own survival. … He creates a trajectory for his life that makes sense of the events of that seminal evening. His life’s work is to protect innocent people from such events and to bring perpetrators to justice.” Case closed.

But Rosenberg doesn’t just tell us, she shows us. She tracks Bruce Wayne’s efforts in transforming trauma into meaning, via physical and mental training, delayed gratification, “theory of mind” and a host of other psychological methods that, amazingly, amateur psychologists called “writers” have given us numerous examples of over the years.

But speaking of years, Batman hasn’t exactly been a static character. Rosenberg shifts the focus as the writers have, extending her construction of Bruce Wayne’s personality profile through the Frank Miller Batman of “Dark Knight Returns” and various movies, clicking into place Bruce’s childhood anxieties, how he lives with guilt, how he deals with fear and how, ultimately, he is a master of self-control.

I’ve been reading Batman stories since the early 1960s, and even this jaded veteran learned something new on every page. And that’s just the start! Here’s a sample of observations on other characters: * Wolverine: She supports the science behind his implanted memories, and explicates the difference between the semantic memories he retained and the episodic ones he lost.

* Iron Man: Rosenberg makes us aware of how Tony Stark’s wartime trauma would have undercut his global-belief system – and how Professor Yinsen’s sacrifice would have rebooted it in the ways it did. Also, “Iron Man 3” aside, is it likely that a man like Tony Stark would develop PTSD? And is he addicted to the feelings of power and well-being he gets when he dons the Iron Man?

* What is a personal fable, and how does it help Buffy accept her destiny? And how smart is she, anyway? Rosenberg explains.

* Did you always think Peter Parker was shy? Rosenberg says you’re wrong, and proves it. Plus, how wearing a mask unleashes the Peter Parker within.

There’s more – much more – especially in more recent books. In reference to Green Arrow: Year One, Rosenberg says “As with comic-book stories in general, Green Arrow’s recent reboot is more psychologically realistic and complex than the previous versions.” Which, thankfully, she then explores.

Full disclosure time: This book came out almost a year ago, and I’m just now getting around to reviewing it. (Books without pictures take longer to read!)  And in the meantime, I’ve had an essay accepted for Rosenberg’s next book (on Spider-Man).

But essay or no, I’d recommend this book anyway. Superhero Origins finally explains all the things that we felt were true but couldn’t explain. It’s not only a fascinating read, but an empowering one: Now you can finally win that argument with That Guy You Know at the comics shop!

I read her first book and liked it. I will definitely read this one, too, now that I know about it. I send an e-mail to her suggesting that she tackle Ant-Man. She said she’d consider it (depending on how well the Batman book sold), but Hank Pym could probably fill a volume on his own. So her next book’s going to be on Spider-Man, eh? Well, I’ll read that one, too.