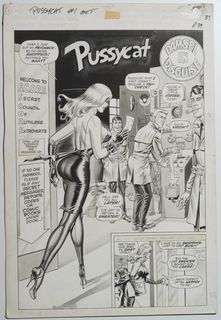 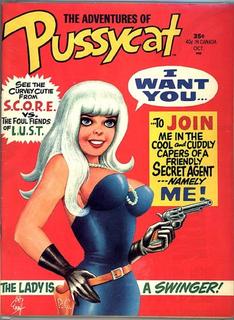 I didn't even know Casino Royale had words. But I've had What's New Pussycat running through my head all morning.

Geez, and to think I like Herb Alpert and the Tijuana Brass.

The Daniel Craig movie in 2006 was truer to the Ian Fleming novel, but if you take the 1967 version as the comedic romp it was intended to be, it's enjoyable too.

I'll restrain from posting the You Tube video of the opening theme song, but it's only during the closing rendition that you have to worry about the lyrics.

Okay. I tried. I REALLY tried.


Enjoy the music as originally intended.

The closing song actually fits the new movie pretty well, as can be found on youtube somewhere, although for some reason the poster seemed to be obsessed with showing a bizarre torture sequence from the 2006 movie several times. It should be the sixth one down if you type in Casino  Royale Theme Song 1967.

Original Sin seems to be following the "From now on all agents will be named James Bond!" idea with all those SHIELD LMDs being Nick Fury.

...I don't see a Maervel logo anywhere on that cover how can you really call this a " Marvel " publication ???

Do you call TIME , SPORTS ILLUSTRATED , and FORTUNE DC mags ???

Seriously , was PUSSYCAT ever plugged/mentioned ~ to any extent even a casual remark in a lettercol answer ~ in any Marvel comic of that time ?

As far as " genre/pulp " stuff goes , Goodman/Cadence/whatever we call the " other parts " of Marvel had a large line of " Men's Adventure/men's sweat " magazines ~ Those " At The Mercy Of Hitler's Nuclear razor Lesbian Preistesses " things that actually kept a lot of the surviving pulp illustrators occupied drawing their lurid cover imagery that old guys in barbershops of the time would read ~ Were THEY MU ? (Actually , did Pussycat ever appear in those , not just stags ?)

As Mr.Age points out on the first page of this thread, GCD reports the indicia as saying "Marvel Comics, Inc." Here is the link to the listing:

Richard Willis replied to Steve W's discussion A Cover a Day
"This is news to me. I didn't realize there were comics with the Dell masthead after Gold Key…"
7 minutes ago

Richard Willis replied to Steve W's discussion A Cover a Day
"In the 50s, DC debuted several series in either The Brave and the Bold or Showcase. to see if they…"
10 minutes ago

Jeff of Earth-J replied to The Baron's discussion The List of 870 Super-Heroines
""Did she actually fight evil, or anything?" It's difficult to explain. "Young…"
13 minutes ago

The Baron replied to The Baron's discussion The List of 870 Super-Heroines
"Another interesting idea.  Did she actually fight evil, or anything? All I've been able…"
30 minutes ago

The Baron replied to The Baron's discussion The List of 870 Super-Heroines
"Interesting idea.  I never really thought of them as "super-heroes", as…"
38 minutes ago

Jeff of Earth-J replied to Steve W's discussion A Cover a Day
"Whoops. I took the opportunity to post them back-to-back (but, as it turns out, Steve W sneaked in…"
42 minutes ago

Lee Houston, Junior replied to Steve W's discussion A Cover a Day
"I was saving the second Ka-zar series for tomorrow, because the last issue had a full wraparound…"
46 minutes ago

Philip Portelli replied to Steve W's discussion A Cover a Day
"There were the I.W. reprints of Plastic Man from1963-1964 that were illegal! "
48 minutes ago

Jeff of Earth-J replied to Steve W's discussion A Cover a Day
"His next series is even more appropriate... "Collectors' Item Last Issue!""
1 hour ago

Steve W replied to Steve W's discussion A Cover a Day
"Next up, for me, Plastic Man.  He first appeared in Police Comics #1 (publisher Quality) cover…"
1 hour ago

Lee Houston, Junior replied to Steve W's discussion A Cover a Day
"Several characters received and lost their own titles over the years, with each revival starting…"
1 hour ago