With Hallowe'en not that far away, I'm in the mood to watch some horror flicks.  Since I have the six Universal Legacy collections for Dracula, Frankenstein, the Mummy, the Invisible Man, the Wolf Man and the Creature from the Black Lagoon, I decided to have a look at them all again. However, instead of just plowing through each one individually, I'm going to watch them all in the order in which they were released, at least as best as I can determine they were.

COOL!  This reminds me of a project a member of KLORDNY once did, trying to put events of the Post-Crisis DC Universe into a coherent, consistent timeline.  Which was not easy, given so many stories were deliberately (arbitrarily?) told out of sequence.  What blew my mind at the time, specifically involving Batman's "new" history, was that, despite so many people working on it and so many stories being told out of sequence, at least at the time, it all made consistent sense.  That meant either someone at DC was working very hard to keep things consistent, or a lot of dumb luck was involved.  (Maybe both.)

I agree that Dracula, Alucard & Latos do seem like 3 completely different people.  Perhaps relatives, or perhaps members of the same "cult of vampirism" (see the Hammer Films), and using the TITLE of "Count Dracula".  On the other hand, if you wanted to reconcile all 3 as one person, their story makes more sense if SON OF DRACULA takes place after ABBOTT & COSTIELLO MEET FRANKENSTEIN.  No, really!  In HOUSE OF FRANKENSTEIN, they refer to Dracula as having been destroyed in his castle.  Well, Carfax Abbey was close enough.  He had a stake driven thru him, and Boris Karloff pulled a stake out of that skeleton.  Both Dracula and the Monster wind up killed in the same house in HOUSE OF DRACULA, which would help explain how Sandra in A&CMF got involved with both of them.  Dracula seemed to develop an interest in science in HOUSE OF DRACULA, and took that further, posing as a doctor in A&CMF.  In SON OF DRACULA, "Alucard" claimed he would be spending his time on "private research" or some such.  He didn't do this, but his saying it at all makes moree sense if you figure the other 2 (later) movies actually happened earlier!  Plus, he was "shipped" to America in A&CMF.  In SOD, the story starts with him already in America.  While he allegedly claims to have come FROM Europe-- you quickly realize looking at the film now that this is the SAME story told by Barnabas Collins in DARK SHADOWS.  In recent years, SON OF DRACULA has come to reminds me of a "prototype" of DARK SHADOWS, far more than any other Dracula movie ever made!

I also found it interesting that the cure for Larry Talbot was virtually identical to the one used in WEREWOLF OF LONDON.  That required a steady use of the rare flowers, and with the house destroyed at the end of HOD, there went Larry's cure, explaining why he was still a werewolf in A&CMF.

I also found it interesting that the cure for Larry Talbot was virtually identical to the one used in WEREWOLF OF LONDON. That required a steady use of the rare flowers, and with the house destroyed at the end of HOD, there went Larry's cure, explaining why he was still a werewolf in A&CMF.

I hadn't made that connection, that's an interesting link.

I never saw WEREWOLF OF LONDON until about 15 years ago, when I watched all of these movies as a marathon (mostly on weekends) with my Dad.  I forget if it was while watching WOL, or later, while watching HOD, but during one of those, it suddenly it me-- HEY!! --that explains why Larry was not still cured in the A&C movie!

The A&C film seemed like it was written by people who paid more attention to characterization and series continuity than the people who'd been doing all the other 40's horror sequels.  As an example, they also remembered that the monster could talk!

Having recently re-watched Frankenstein Meet the Wolf Man, I see that Elsa does state that she's the grand-daughter of the original Doctor Frankenstein.

Watched Son of Frankenstein today with the Lad.

I played Abbott & Costello Meet Frankenstein (for the who-knows-how-manyeth-time) recently and just realized a few things that made no sense. And yes, I fully understand how futile it is to expect logic in an A&C movie so... 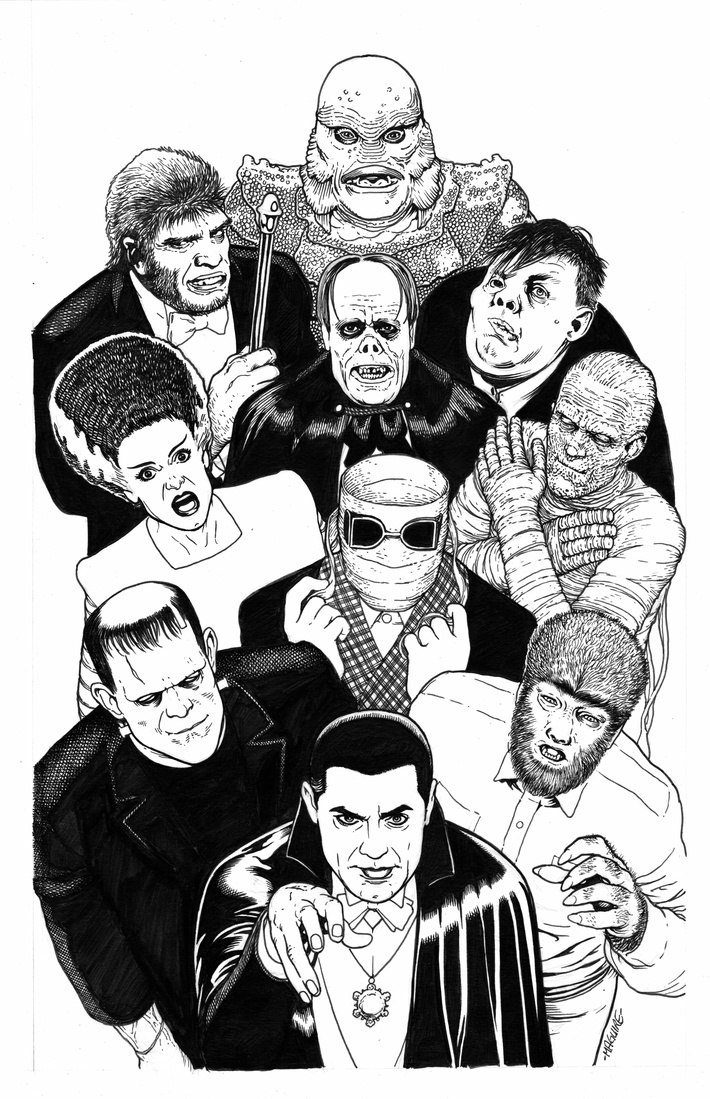