I never got into Planetary while it was running, despite my admiration for both Warren Ellis and John Cassaday. I remember buying the first trade when I started investigating Warren Ellis's work (I was just getting into Vertigo, and I had enjoyed The Authority). For some reason Planetary didn't grab me, but Transmetropolitan did, and I later sold the trade. So now that the series is finally done, I thought I'd give it another go. I've got all four trades, and plan to read one a week, starting next week. Is anyone interested in reading along, or have read it recently enough that you'd enjoy discussing it?

Ah, but that's the best a corporate character with huge brand-recognition like Batman, who will be endlessly rebooted, can hope for. Meta-criticism again, I guess.  Gaiman finds the small grace inherent in Batman's endless quest for vengence and justice - that the story begins again each time with young Bruce in the bosum of his loving family.

That's something human and humane there unnoticed on the edge of the world's best-loved macho revenge fantasy.

But Ellis does foreshadow it here, and Morrison made a variation on it the climax of his long, baroque delve into Batman's torment.

That is a lovely thing, small though it is. I guess I'm a bit overwhelmed by the "endless quest for vengence and justice" part. We're left with Bruce as a tormented, driven man. But as Gaiman's story points out, the early years of joy with his family is more than lots of people get. Harsh! I liked the soliloquy that Ellis wrote towards the end of the story, where Bruce offers advice to the phase-shifting metahuman about how to survive his loss. That showed a mature Bruce Wayne making the most of his circumstances.

Ah, but that's the best a corporate character with huge brand-recognition like Batman, who will be endlessly rebooted, can hope for. Meta-criticism again, I guess.  Gaiman finds the small grace inherent in Batman's endless quest for vengence and justice - that the story begins again each time with young Bruce in the bosum of his loving family.

We're shown a bit of the Hark family tradition, then Snow offers a hand of friendship to Anna Hark. He knows she has been cooperating with the Four, and that she sent her agent James Wilder into the Hark building bomb site intentionally, in order to create a superhuman. Hark assents, and is reunited with the changed Wilder (in his transformed pilot form). 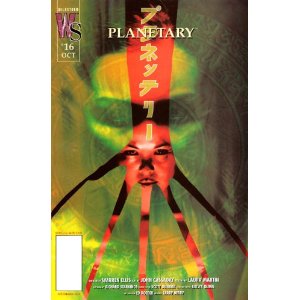 Laura DePuy gets a lot of props for her work on this series and the colouring on this issue is worth a mention.  Red is a hugely significant colour in Chinese culture, signifying good fortune, and Jade is possibly the most valued stone.* So here the colour scheme is green and red.

The elaborate 'floating in the air' fighting styles would seem to be a reference to Chinese martial arts movies, but perhaps the fiery end moves owe more to ‘Street Fighter’ type video games than anything else.  Neither are very long-standing additions to the culture, but Ellis is showing that there are a wealth of influences outside the comics that can be drawn on.  Ellis probably does a better job at integrating Eastern influences into the first half of this comic than Fraction and Brubaker managed in the whole series of Iron Fist that they did (and that wasn't a bad comic.)

Hark does pan out as another conversation issue. It has a deceptively simple surface, but as usual there is a little more going on.  There is some heart in Snow's reaching out to Hark, who has found herself isolated by her heritage and intelligence and longevity.  Obviously she has been treading warily with the Four, and couldn't trust them, but Snow is offering her a partnership of equals and a chance to do the right thing.

Ellis slyly has them mention Jakita, but rereading it now, I see that it’s his way of showing us that Hark is sorely missing the guidance of her father.  Hark seems to know that Jakita grew up under the eye of a father-figure watching out for her, but the readers wouldn't have known that yet!

Another sly wink is how Snow refers to himself as 'the man who knows.'  Perhaps Snow is a sort of pun on 'knows'. It's his thirst for knowledge which is Snow's real super-power and the reason he is such a threat to the bad-guys.

Ellis' scripts for Planetary are deceptively simple-looking on the surface, but there's much more there than meets the eye!

*A Chinese friend of mine made a point of giving my daughter a jade stone when she realised that she was born in the year of the Ox, as Oxes have to struggle hard, and she’d need the beneficial jade jewel to help her out!