DC Comics is in the middle of a massive “Rebirth” – and so far, the babies are in the pink, while the company is in the black.

The re-launching of the main DC superheroes under the Rebirth label began in June and still continues. The enthusiasm with which fans embraced the changes surprised many retailers, and that excitement turned into sales. After a year of languishing a distant second place to arch-rival Marvel Comics, DC pulled ahead in July, according to Diamond Comic Distributors Inc. 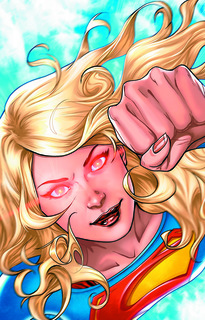 Actual apples-to-apples comparisons are a bit fuzzy, as Marvel shipped 97 books in July to DC’s 63. Also, DC has opted to price all of its Rebirth titles at $2.99, while the bulk of Marvel’s books have a $3.99 price point, with its biggest sellers – including those two top 10 books in July – going for $4.99. Further, DC is publishing many of its top titles twice a month. All that makes the math messy.

But the overall trend is clear. And what is the source of this enthusiasm? Back to basics, essentially.

What Chief Creative Officer Geoff Johns said when Rebirth launched was that he wanted to restore three things to the DC Universe that he felt had been damaged or eliminated by a 2011 reboot called “New 52.” Those things were love, legacy and hope.

By love he meant the many romantic relationships that New 52 had erased, such as the marriage between Aquaman and Mera, and the long-running on-again, off-again romance between Black Canary and Green Arrow.

By legacy, he meant the intergenerational aspects of DC’s superheroes, many of whom have lineages going back to the 1930s and ‘40s. For example, the very first superhero team in comics – the Justice Society of America, which premiered in the 1940s – boasted a Flash, a Green Lantern and a Hawkman among its members (but not the current ones). Wiped from DC’s history by New 52, the JSA is scheduled for a comeback. 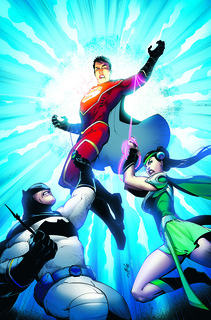 As to hope, one assumes Johns meant an antidote to all the teeth-gritting grimness permeating comics. Sure, we all know comics aren’t just for kids any more, but the adult world isn’t one of unrelenting awfulness. Not all comics need to be dark.

And so far, letting the sun (and the past) shine in has worked. Last month I wrote about the Rebirth titles released through July 6, which included books starring Aquaman, Batman, Flash, Green Arrow, a couple of Green Lanterns, Superman, the Titans, Wonder Woman and the Justice League. All of the revamped books, 11 in all, were stronger, more interesting and more fun than their predecessors.

Some of the highlights of this new wave include:

Yep, that’s pretty much the cast of the movie.

* Meanwhile, over in Supergirl: Rebirth, the Maid of Steel – unlikable and obnoxious in her New 52 iteration – has become much nicer, and has dedicated herself to protecting her new home from outer-space baddies. Why, she’s so dedicated that she’s joined a government agency called the D.E.O., taken the secret identity Kara Danvers to fit into Earth better, and been “adopted” by a couple named Eliza and Jeremiah Danvers.

Yep, that’s pretty much how the TV show is set up, too. Hey, when something works, you don’t fix it! 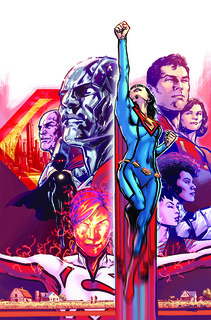 * Like Batgirl. If the New 52 got one thing right it was the Dominoed Daredoll. In 2011 Barbara “Babs” Gordon was revamped as a peppy college student with a home-made costume, clever gimmicks and an eidetic memory, who worked the cool, hipster part of Gotham called Burnside (while Batman patrolled the darker corners of town). Batgirl: Rebirth continued this Bat-Lite concept without missing a beat, and it’s still a lot of fun.

* But what was missing from the new Batgirl was her old superhero team, so Birds of Prey: Rebirth has gotten the band back together. Batgirl is once again teamed with Black Canary and Huntress as the BoP, but this team bears little resemblance to the old ones, or the even older TV show that almost nobody remembers. The new Huntress is a former espionage agent, while the new/old Canary has added “rock and roll singer” to her CV. (They still wear familiar costumes, if that helps.)

* Also going back to the future is John Constantine: Hellblazer. For reasons of incredibly bad decision-making, the last two or three Constantine series have been set in America, when London is as much a part of the character as his self-destructive behavior, blue-collar snark and filthy trenchcoat. Thankfully, wiser heads – and Hellblazer: Rebirth #1 – returned Constantine to his native habitat.

But not all is the old turned new. Some of Rebirth is just plain new.

* New Super-Man is a case in point. This series features a high school bully in China who is selected by the Chinese government to be given super-powers and join their “Bat-Man” and “Wonder-Woman” as a Sino version of the Justice League. It’s a clever book – Super-Man is just too immature to play by the rules – and one running gag is that the hyper-competent Bat-Man is a bit on the tubby side.

* Superwoman stars both Lois Lane and Lana Lang – well, the New 52 versions, anyway – who have gained super-powers from Superman going supernova. (Don’t worry, there’s another Man of Steel to take his place.) There are a lot of Easter eggs here for longtime DC readers, who have seen many people calling themselves Superwoman, many stories where Lois or Lana gain super-powers, many times other women exhibited Kryptonian-like powers, and this book pretty much references them all. But given the surprise ending of the first issue – no, I won’t spoil it – it promises to go where none of those other stories have.

"– no, I won’t spoil it – it promises to go where none of those other stories have.

Please spoil! I can't afford comics at the moment, so, I keep up with events on line. When the day comes that I can again walk into a comic shop, I don't want to look like a proverbial tourist.