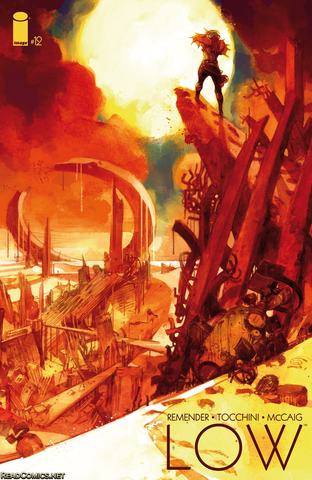 Rick Remender returned to creator-owned comics in 2013-14 with three new titles for Image.  Black Science, the crazy cross-dimensional escapade, came first.  Deadly Class, the intensely personal story set in a school for assassins, came second.  And Low came third.  I enjoyed Low- the story of a fractured family in an undersea refuge in the future- but, in my estimation, it never quite measured up to the other two titles.  Black Science and Deadly Class consistently ranked among my current favorites.  And Low, well, Low was third.

That may have changed over the past two months.  Issues 12 and 13 were two of the wildest, most intense, most imaginative comics I’ve read so far this year.  In issue 12, the family matriarch, Stel Kaine finally managed to reach the surface.  She discovered that, in humanity’s absence, the earth’s atmosphere had stabilized.  The surface was indeed habitable, if not entirely welcoming.  Stel spent the first half of issue 12 exploring the desolate landscape.  But then, she and her companion were confronted by a jaw-dropping turn of events.  They suddenly found themselves caught between two warring armies.  In humanity’s absence, rats and cockroaches had not only survived, they had evolved.  The surface was now inhabited by two sentient species warring for control.

I was dumb-founded.  I hadn’t expected it at all.   It was an incredible twist.  It could have been cheesy- it’s not easy to ask your audience to take talking cockroaches seriously- and yet it worked.  Remender had already established advanced species in the depths of the sea.  So, while, the revelation was unexpected, it wasn’t uncharacteristic of the world he had created.  Meanwhile, Tocchini designed a surface world that looked suitably desolate and captivating.  It was beautiful in it starkness.  Plus, we could have never taken the talking rats seriously if Tocchini hadn’t drawn them with the right mix of creepiness and composure. 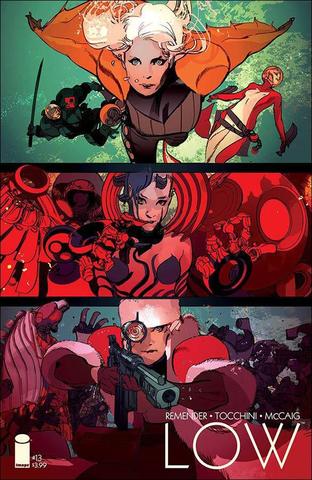 If anything, the next issue was even better.  Remender returned to the voyage of Stel’s twin daughters, Della and Tajo.  They had commandeered a submarine and were trying to follow their mother to the surface, along with their former sister-in-law Lena.  It seemed as if the Kaine family was finally coming together.  Alas, it wasn’t meant to be.

The two sisters were alternately jealous and suspicious of each other.  They each tried to woo Lena into an alliance.  Too late, they discovered that Lena was playing them off of each other.  Lena’s innocence was a charade and she turned on the sisters in a brutal act of betrayal, injuring one and flushing the other into the sea.

I was dumb-founded for the second issue in a row.  I was ready for the rivalry between the sisters to heat up but I didn’t expect Lena’s betrayal.  It was another incredible twist.  The issue 12 twist was about world building.  The issue 13 twist was about character building and that made it even more impressive in a way.  As a reader, I discovered Lena’s duplicitousness at the same time of the sisters.  I shared their realization that I trusted Lena without really knowing her.  It was masterful storytelling.  Suddenly, I can’t wait to find out what will happen next.

Black Science and Deadly Class roll along as excellently and unexpectedly as always.  To my delight, Low has finally earned its spot alongside them.

Buffy’s Season Ten was another title that had been enjoyable but not earth-shattering so far.  I always enjoy spending time with these characters and Christos Gage was doing a good job.  He had the voice right (which isn’t easy considering Joss Whedon’s unique verbal patter).  And he had the right blend of action and characterization.  There was nothing wrong with Season Ten, even if it didn’t quite match the brilliant scope of Season Eight or the deep intimacy of Season Nine.  However, Season Ten has been gaining steam as it approaches its finale and the last two issues have been nothing short of genius. 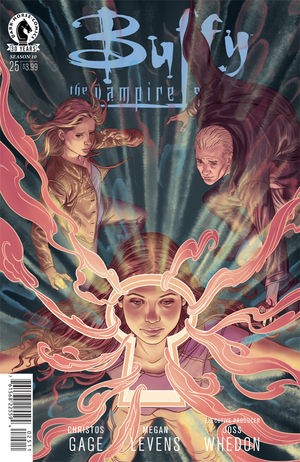 Issue #25 was the climax of the second-to-last story arc.  Buffy and her gang of Scoobies were confronted with the seemingly insolvable problem of closing a dimensional portal.  Someone remarked off-handedly that they needed a key.  Astute Buffy fans like my wife anacoqui picked up on the clue.  Buffy’s younger sister Dawn was originally a dimensional key before being magically transformed into a human girl. The only problem was that Dawn could only close the portal from inside, meaning she would be stranded in the other dimension.  Xander, Dawn’s estranged boyfriend, offered to stay with her as the one expendable member of the team.  Buffy reluctantly agreed.  The team retreated to Earth and Dawn closed the portal, stranding herself and Xander on the other side.

It was a great moment.  It was clever and poignant, tugging on the heart and the mind at the same time.  Yet Christos Gage had a second twist in store.  Xander’s former fiancée, Anya, had been haunting him as a ghost for most of this season.  The other Scoobies couldn’t see her and generally thought that Xander was losing his mind.  Xander refused Anya’s proposal to stay in the demon dimension.  Anya reluctantly followed the Scoobies back to Earth, even though they couldn’t see her.  As the portal closed, Buffy made a wish to see her sister.

Again, my wife anacoqui immediately picked up on the implications of that comment.  Anya was a former vengeance demon.  Even as a ghost, she had the ability to act on Buffy’s wish and, as demons often do, turn it against the team.

Issue #26 was officially the start of a new story arc, but it’s really a continuation of the same wonderful story.  Xander and Dawn are stranded in the demon dimension.  They hope that Buffy will eventually be able to rescue them but they don’t know how long it will take so they try to make a new life in this new world.  They befriend the locals who are awestruck by Xander’s ingenuity.  In this new dimension, Dawn sees Xander with new eyes and her love for him begins to rekindle.  It’s a touching moment that this reader was delighted to see.  I’ll be honest: I wanted Xander and Dawn to get back together yet I was pleasantly surprised by the way Gage brought it about. 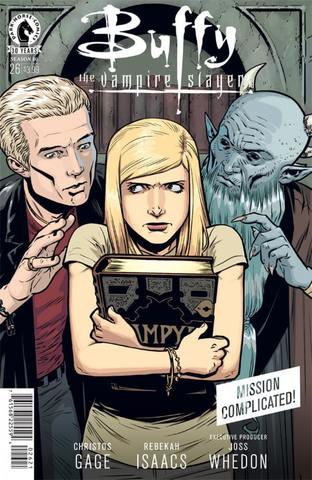 Meanwhile, the Big Bad was finally disclosed.  Buffy had been working with D’Hoffryn, the head vengeance demon, in her attempt to rewrite the rules of magic.  D’Hoffryn seemed like a willing ally but it was all a ruse.  Readers had seen signs that D’Hoffryn was playing his own game for a while but with this issue, his nefarious plot stood revealed.  D’Hoffryn killed the other members of the demon council, accumulating their power for himself.  He then attacked Buffy and the remaining Scoobies.  He stole the book of magic and absconded into the night.  Buffy belatedly realized she had been fighting the wrong battle all along.  This last twist wasn’t entirely unexpected- Gage had laid the groundwork over several issues- but it was excellently executed.  It sets up a massive conflict for the final arc and it’s hard to see how Buffy can prevail at this point.

The last two issues have been absolutely riveting and I can’t wait to see how it plays out.  If you’re a lapsed Buffy reader, it’s time to come back on the bandwagon.  Buffy is as great as ever.