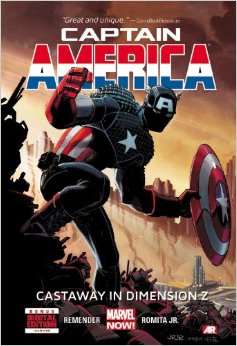 This story shoots for "epic," and falls just short.

The story, as established in the first book, is that Arnim Zola has kidnapped Captain America to "Dimension Z," where he wants to use his DNA to create a super-soldier army. He uses as his "clay" an indigenous species called the Phrox, turning them into near-mindless mutates. In the last volume, Cap escaped to lead the Phrox resistance to Zola's rule, taking with him Zola's son Leopold, whom Cap re-names Ian and raises as his own son.

With the beginning of this volume, it's been 12 years, when Zola re-kidnaps Ian, sics his daughter Jet Black against the Phrox and begins the final stages of his Master Plan to Conquer Earth. We see an internal debate between the characters on whether Cap rescued or kidnapped Ian. We see Cap try to turn Jet Black against her father. We see Zola try to turn Ian against Cap. Sharon Carter shows up with a stunning revelation. Then Zola's city turns into a flying battle station and heads back through the dimensional tunnel to Earth, with all the characters involved in some level of mayhem all over the place.

I won't spoil what happens, but overall it was an interesting story. I see that Remender was raising an interesting moral question (kidnapping vs. rescue?), putting Cap's moral paradigm to the test (especially in "debates" with Ian and Jet Black). He also, for some reason, really enjoyed beating the crap out of Steve Rogers, who looked like 180 pounds of ground chuck through most of this volume.

I didn't care much for that latter part -- frankly, it was disgusting -- but I did enjoy the moral questions. OTOH, there were some glaring flaws that kept this story from being a classic.

For one thing, characters kept changing sides a little too easily. It was simply implausible that characters could reject their upbringing in response to verbal challenge, and then re-adopt it just as easily. And the ending employed Captain America Cliche #1 regarding Sharon Carter, which made me grimace involuntarily as I breathed the words "not again."

I should also mention that I'm usually a JRJR fan, but he didn't seem to be giving 100 percent here. Often the Phrox just looked like blobs with hats, and backgrounds were sketchy at best. Some figures were simply out of proportion. There's a lot of energy here, but not a lot of patience, with only the broken-nosed, torn-uniform, bleeding-from-everywhere Cap getting the artist's full attention (which, as noted, was not terribly pleasant).

The upshot is that "Dimension Z" shot for an epic feel, and missed. But points for trying, even if the results were only hit-and-miss.