Captain Atom has been presented a lot of different ways: He was essentially Charlton's Superman, he was the straight man in Justice League Task Force, he was a martinet on Justice League Unlimited, he bounced around time and the multiverse in the last Captain Atom series, and so forth. In The New 52, writer J.T. Krul decided to take the character in an entirely new direction ... by turning him into Firestorm.

OK, he didn't have a second personality merged with him to provide exposition. (Instead he has a mentor to provide exposition.) But in the first issue, he discovers his powers (I think they're atomic again) allow him to transmute elements. Which is, you know, Firestorm's stock in trade. Also, like Firestorm, he developed a pilot light on his head.

Is there some reason we should find this interesting? If we did, we could just buy Firestorm. Which, you know, most of have never done, because Firestorm keeps getting canceled.

That should have been a hint.

I guess what I'm saying is that the first 6 issues were slow. Let's hope the final 6 are better when I read the 2nd Trade.

I don't plan to read that second trade, Mark, so let me know what you think. If it gets more interesting, or sets up the character for a bigger role in the larger DCU, then you could talk me into getting it!

I read the first five issues or so, and as a Captain Atom fan, I considered it DC's attempt to remake a Dr. Manhattan with a slice of Firestorm to boot.

I did enjoy what I read, but felt it was dragged out way too long. I get very frustrated with superhero comics where there's such horrifically decompressed stories. They are written like long form TV scripts, which I find detrimental to the very finite page count and high price point of a comic book. I want a smidge of character development in between action and rapid-fire story progression, not the other way around!

So why am I a Captain Atom fan? Because I really love the iconic look of the DC Captain Atom. Love the silver-shell skin, the logo and the boots & gloves. This Captain Atom had all that going against it, but Freddie Williams II offered a great-looking book.

In my fanboy head, the classic Captain Atom will always be the all-new, all-different Captain Atom at Charlton. Loved the way Ditko drew the slick skin. I don't recall how much difference there was between that version and the one you're talking about, which is very similar.

By contrast, the first version of Captain Atom at Charlton was hideous. Here are the two versions: 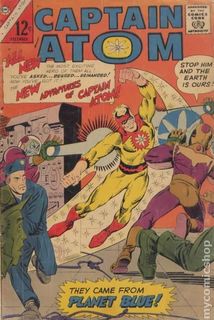 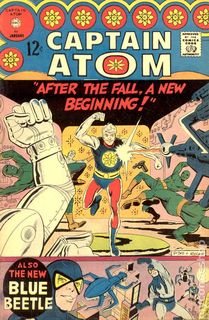 While I think it's great that DC has tried some new things with the Nu52, it's a shame that all most of them seem to be able to do is recycle the same old tired concepts, or fix things that weren't broken to begin with.

Personally, I think Firestorm keeps getting canceled because he's not very likeable, has a lousy supporting cast and lousy villains, but that's just me.  I'm sure there are tons of people waving $4 in the air for a Firestorm book.

Not enough to keep it from getting routinely canceled! (And I agree with your assessment.)