This book should have been titled "What If Mark Waid Never Wrote Daredevil"?

As most long-time Daredevil readers know, Frank Miller took the series down a very dark path beginning in 1979, using existing characters like Kingpin, Bullseye and Death-Stalker in brutal new ways and expanding and establishing this dark new status quo with new characters like Elektra and Stick and new concepts like The Hand. Each succeeding writer -- including David Mack and Brian Bendis -- built and expanded on this approach to the Man Without Fear, to the point where Daredevil became so bleak that it should have come with a suicide warning. Some of the major artists involved in this period (aside from Miller himself) included Klaus Janson, Bill Sienckiewicz and Alex Maleev. 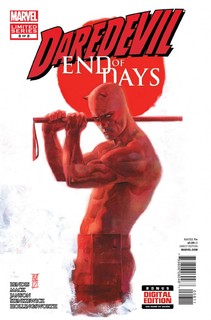 Then came Waid, who abruptly ditched all that baggage and began Daredevil all over again with a pronounced sense of fun. Not only was the title no longer an exercise in despair, it was ... well, bouncy. This new approach has been abetted by upbeat, retro artists like Chris Samnee and Paolo Rivera.

This isn't a review of Waid's work, but it's necessary to mention it, because reading End of Days post-Waid was a shock. I'd almost forgotten how hopeless and cheerless it was to read Daredevil during the Miller-Mack-Bendis continuum. Diving back into that world must be what post-traumatic stress disorder feels like -- a painful flashback to a horrible experience.

Which is not to say I didn't enjoy the old, gloomy Daredevil -- I did. But, frankly, it was a relief when Waid took Matt Murdock in his current direction, because there's only so much humorless desolation one can absorb.

But that's exactly what this book is: A continuation of the themes and approach of the pre-Waid Daredevil, as if those later stories never happened. End of Days carries the Miller themes, concepts and ideas to their natural conclusion -- which isn't a pretty one.

In fact, I wonder if that wasn't the purpose of the book: To show readers why a change was needful. Or maybe it was to allow this particular story to finish, so those toys could be put away. Or to give closure to the creators, and maybe the readers as well.

But whatever, it's a grim book. Heck, it begins with the death of the lead character, which gives you an idea what sort of pain to expect in the pages to follow. You see the death of almost major character, the wrap-up of long-running existential contests and a conclusion to the balancing act Daredevil always had between justice and vigilantism. (What is that end? Here's a clue: The character himself justifies a certain action by saying "I tried everything else.")

To tell you the truth, I sorta suspected that this wasn't going to be a walk in the park, and had put off reading this book for months. I remember all too well Marvel's badly-conceived effort to show the deaths of all their major characters in various miniseries and one-shots with "The End" in the title, and how depressing that was. I was in no hurry to re-experience that.

But, having said all that, I enjoyed Daredevil: End of Days. OK, I didn't enjoy it like a good meal or an afternoon walk with my wife. But I did enjoy it like I enjoyed Crime & Punishment: A hard story well told, addressing serious philosophical issues and moral concerns.

It's not perfect; I guessed much of the ending long before we got there. That was partly because Bendis and Mack didn't make much of a mystery of one of the two central mysteries (and maybe they didn't mean to), and the other one was a clumsy disappointment. But also because there are only so many ways this story can end.

Which brings us back to themes. The story mechanics and structure are competent, and the artwork -- all by Miller/Bendis veterans -- is excellent, with even the shift between artists mirroring story shifts. But what really makes Daredevil: End of Days worth reading is the English Lit aspect. Unlike most superhero stories, this one definitely ends. And it makes an effort to give an answer to all the thematic questions raised by Miller so many years ago -- plus, in a sense, the question raised by Superman in 1938 and carried forward by all his four-color successors, about whether the positive ends most superheroes pursue justifies the fascist means by which those ends are achieved.

In general, the answers we get in End of Days make sense, and in fact seem almost inevitable. But they are not comforting. Hard truths never are.