Review: Guardians of the Galaxy Vol. 1

There's a good story here, but not very much of it. 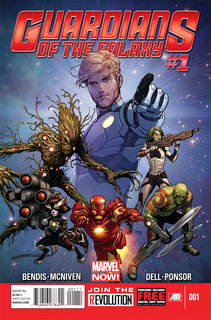 This book collects only the first four issues of the new Guardians of the Galaxy series (beginning with an "0.1" issue), and is rounded out by something called "Tomorrow's Avengers," which is not to be confused with the "Guardians" TPB of that name, which collects material featuring the Guardians of the Galaxy from the future (but published in the past). Got it? Moving on.

The first three issues are a complete story where Star-Lord -- the hereditary prince of the Spartax Empire -- is contacted by his estranged father, and ordered not to go to Earth. Which he promptly does, of course, whereupon he and his team (which includes Iron Man, and you wouldn't have any idea why unless you were following Iron Man) defend London from a Badoon attack. This situation was likely created by his father also, in that he held a meeting with various galactic powers (long-time readers will recognize every one of them) and got them to agree to putting Earth off limits to all galactic powers, which -- as Star-Lord says -- is as good as putting a target on Earth.

What is the Spartaxian king's game? No one knows! That's fun. And it's sure to be trouble for the Guardians, too, which means drama.

Another good bit: The Spartaxians block all communications in or out of London during the Badoon invasion. That does two things: One, it explains why Iron Man doesn't immediately call in every superhero on Earth, and two, it gives Brian Bendis an opportunity for funny dialogue as each character fusses at the others to get the communications going. More fun.

The 0.1 issue is a recap of Star-Lord's origin from Marvel Premiere #4 (Jan 76). You know, I wasn't all that impressed with that story 36 years ago, and time (and better art) hasn't improved it any for me. I still don't see any reason why I should like or admire Peter Quill, nor why his team should, either.

Then after the three good issues -- mostly with Steve McNiven art -- we get "Tomorrow's Avengers." This is four "assembling the team" solo stories starring Drax, Gamora, Groot and Rocket Raccoon, by different artists, and varying in length from 7 to 11 pages. They also vary quite a bit in art quality, but not in story -- because I saw no need for any of them, and felt like they didn't add a thing to my understanding of the lead story. (Also, being "assembling the team" stories, they really should have preceded the lead story, but mysteriously didn't, probably because you don't lead with your weakest material.) I think these stories were first published online, and if I'd have had to pay money for them individually there I'd have been quite irate; having to pay for them here is still pretty irritating.

So, yeah, I Iiked the three-issue "Cosmic Avengers" story, and I will likely buy the next GotG collection, which will include the story with Neil Gaiman's "Angela" character (that he won back from Todd McFarlane in a lawsuit).

But that's despite feeling a little ripped-off on Cosmic Avengers. And volume 2 better give me my money's worth, or I'm out!

OTOH, Marvel's collections only contain five stories anyway. (It used to be six for the same price, as it still is at DC). Gougers!

I think the 'assembling the team ' stories were originally free on t'internet, so you can add that to the cons column...