This was a tough slog.

The first Phantom Lady volume was a novelty, and despite a number of storytelling problems, I enjoyed it. But the second book continues the same problems as the first, but now the "newness" is gone and it's tiresome. 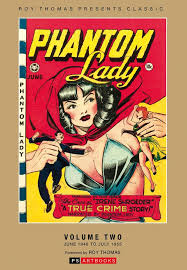 First, let's address Phantom Lady's claim to fame: "Good girl" art by Matt Baker. I don't recall how much of that there was in the first volume, and that should tell you where I'm going next. Which is that Baker was good, but not so much better than other Phantom Lady artists like Jack Kamen (who gained fame at EC Comics) that I found it memorable. Not that it matters much for this review, as a foreword (and the credits) indicate that Baker drew exactly one seven-page story in this volume.

Incidentally, the foreword claims that the most famous (or infamous) Matt Baker Phantom Lady cover -- the one one with PL's breasts prominently featured while she is tied up and armed thugs approach in the background (see image at end of review) -- wasn't by Baker at all, but instead an Iger shop Baker impersonation. The more of this I read, the less importance Matt Baker takes in the Phantom Lady history.

But the various Baker pastiches are all right -- that's not really a complaint. My main one is that these stories are so boring and repetitious they kept putting me to sleep.

In fairness, that's in part because most of these stories are seven or eight pages long. That means that there's only enough room to basically repeat a formula. There's no room for characterization beyond the same tired jokes between the principals and brief sketches for the rest of that particular story's cast.

And even that wouldn't be bad, if the story structure and conventions found therein weren't so dull!

But they were. For one thing, Phantom Lady never faces anything but ordinary crooks. That's fairly standard for the era, but it is nevertheless rather colorless.

For another, it's never explained how Phantom Lady is such a great fighter. She is described as 110 pounds, so how is she overcoming men twice her weight? She punches them, and they fall down. Huh?

It would help if she had some advantages over the crooks. like a special car or utility belt or something. But all she has is the black light, which is the moral equivalent of bringing a flashlight to a gunfight.

Although I will say that the black light is incredibly effective! She flashes it at a bunch of crooks and they are instantly as helpless as babes. Since it's instinctive to look away from something that is shining in your eyes and blinding you, I had to rationalize that the black light didn't just blind you as it shined on you, but that it blinded you for a period of time. That was never any indication of that within the stories, of course, but it helped explain how Phantom Lady could overcome gangs of thugs.

And, lo and behold, the function of the black light was eventually explained, and I was closer to the truth than I thought! On the last page of the last printed Phantom Lady story ("Success Is No Accident," Wonder Boy #18, Jul 55), she says "My private spotlight is special, you two ... it's a black ray that locks you in its rays ... outside of this light, you can't see a thing ... and I'm going to keep you that way until the police get here!" Well, OK, that raises as many questions as it answers (can they see INSIDE the light?), but at least it gives a technobabble assertion that the ray is more than a reverse flashlight.

And maybe this was Ajax's way of finally addressing some of my questions about PL. For example, in the penultimate story, a crook she's punching says "She's stronger than a man!" There's no explanation for this strength, but at least the line acknowledges that there's got to be something unusual about Phantom Lady that she can deck big thugs with a punch.

Or maybe they were trying to beef her up story-wise, because she'd been toned down so much art-wise. The final 11 stories, the ones published by Ajax, are all post-Code, and its effects on Phantom Lady were pretty obvious. Gone was the skimpy two-piece and in its place was essentially a midriff-, shoulders- and neckline-covering one-piece. At a stroke, the Code removed the strip's raison d'etre.

But maybe I'm ignoring Phantom Lady's unmentioned super-power: Incredible luck. I realize that you don't have much time for detective work in a seven- or eight-page story, but sometimes the short cuts the writers take are groan-worthy. For example, in one story where a Phantom Lady impersonator is reported on the radio, Sandra takes a drive to clear her head. Naturally, she runs across a woman broken down on the road who looks exactly like her. And has a Phantom Lady outfit on the passenger seat of a convertible, in clear view. Yes, it's the imposter -- tracked down by page two! Gee, what are the odds?

Another problem (that was worth a few laughs in the first book) is that the maskless Phantom Lady is never recognized as Sandra Knight by Sandra's fiance Don Borden, or her father, Sen. Knight (or anyone else). But it's not played for laughs. Instead we're expected to accept this as a convention, despite the fact you'd have to be blind to fail to realize that Sandra Knight and Phantom Lady were the same person.

In fact, blindness wouldn't even be a factor, because in one story (actually two, because the script was re-used), an Army officer recognizes Sandra's voice as the same as Phantom Lady's although he doesn't recognize that her face and figure as the same (even though both are in full view, ahem). What th-?!??

This is also despite Phantom Lady being so famous she is recognized by everyone on the planet. I'm not exaggerating -- she is recognized in the two stories that take place abroad. And in the unnamed city in which she operates (presumably Washington D.C., since her father's a senator), she is routinely recognized by pedestrians as she drives through city streets ("Look! It's Phantom Lady!" "Some crooks are in trouble!"), and by police at crime scenes (who, strangely, hold her in great esteem and welcome her help).

I should mention here that the two stories abroad are actually the same story. In an interesting look at pre-war U.S.-Korean relations, Sandra accompanies her father on a fact-finding mission to the Hermit Kingdom (referred to as such in the story) in "The Mystery of the Monkey Cult" in Fox's All Top Comics #17 (May 49). That story was re-worked as "Yankee Doodle Luck" in Ajax's Phantom Lady #3 (Apr 55) as a trip to Formosa (now Taiwan). That sort of deja vu happens several times as 1940s Phantom Lady scripts were re-worked for the 1950s Ajax title. I actually didn't mind, finding the different approaches different artists took to depict identical scenes educational.

Lastly, I'll mention that consistency is no virtue here. Sen. Knight's first name seems to shift, and Sandra refers to Don as Bob in one panel, and Don in the next. Also, Don was some sort of assistant D.A. in early stories, seemed to have no job in the Fox stories, and was mentioned as a lawyer in an Ajax story. The only thing that's consistent about Don, it seems, is his absolute uselessness. No wonder Sandra has to take charge!

Having said all that, I'm perhaps being too nit-picky about a strip where good writing wasn't expected. The purpose of the strip, obviously, was to put pretty girls in scanty clothing. In that it succeeded, at least until 1954. But then, as mentioned, it ceased to have any reason to exist. 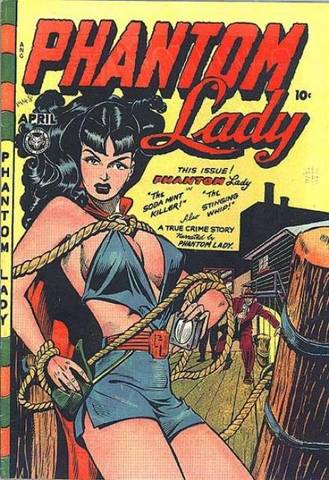 According to the foreword in this volume, this famous cover wasn't by Matt Baker, despite its fame as an example of his work.