I don't know what I expected when PS ArtBooks started reprinting pre-Code horror stories, but I had some sort of vague expectation that was never fulfilled. This book does exactly that. 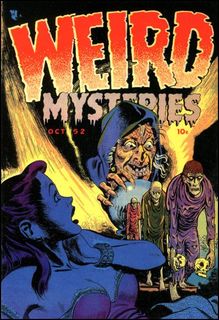 As I've discovered, each pre-Code horror publisher had their own style or tone -- it wasn't just a generic cavalcade of EC swipes. But I did expect some of the latter, and I also expected some excess. Isn't that what the era was famous for? But the ACG stuff was actually kinda high-minded and uplifting (in comparison to others) and the Harvey stuff unrestrained, but kinda amateurish or juvenile. Where was the excess? Where were the stories that don't even pretend to have a hero, and just indulge in bad, bad, bad people?

One place was Key Publications! That was the publisher that gave us Weird Mysteries, a title whose first six issues are reprinted here.

I knew I'd finally found what I was looking for with the very first story, where a co-owner of a greeting-card company is framed by his three fellow owners. So they're bad guys. But when the wronged man gets out, he kills the other three on various holidays, using holiday-specific murder weapons like a Batman villain. So he's a bad guy. And in the end (spoiler), everybody dies and nobody wins and Mwah-ha-ha-haaaaaa!

I read this book pretty much at a sitting, and sure, sometimes it got a little tiresome. But mostly I chortled and snickered all the way through. To paraphrase Lou Costello, these guys have been baaaaaaaad boys!

There aren't very many famous names attached to these stories, although there are a few. Basil Wolverton provides three stories and a cover. Bernard Baily (co-creater of The Spectre) draws a few stories and covers. Ross Andru and Mike Esposito are here (aren't they everywhere?) -- but separately, which is unusual. (And now that I've seen Esposito's pencils, I know why he was an inker for most of his career.) Tony Mortellaro, who was an inker at Marvel in the Silver Age (he was involved in "The Night Gwen Stacy Died" in Amazing Spider-Man #122, for example) is here as well.

But that's about it -- most of the artwork is by no-names, while (as usual for the early 1950s) the writers are completely unknown. And the foreword, as is common in PS ArtBooks volumes, is a completely worthless essay by some Englishman I've never heard of waxing nostalgic about reading comics as a kid. (As if everyone reading the book couldn't write the same essay, or a better one.)

But what the heck. This is the sort of gleeful hoo-hah I've expected from the pre-Code stories, and now I've finally got it. I might not enjoy a steady diet of this sort of thing, but I had fun with this one.

"And in the end (spoiler), everybody dies and nobody wins and Mwah-ha-ha-haaaaaa!"

When I read this I laughed out loud, and a coworker asked what I was laughing at. Turns out she knew what a pre-Code comic book was. Who knew?

Sounds promising, but eight dollars an issue is more than I can afford. Wonder if I can find it somewhere at a discount?

From the one and only Standard issue I have it seemed their tone was being bland. I know that's not fair from one issue but the editor of Tales too Terrible to Tell also said they were bland so I guess I was right. But it was a pre-Code horror comic cheap enough for me to afford so what the heck I bought it anyway.