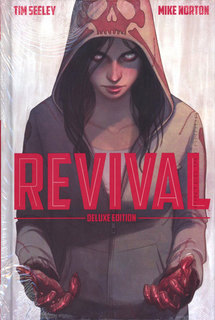 I read the first issue of Revival via Comixology ages ago. I was intrigued, but other comics won my attention. So I finally got my hands on the first two Deluxe Editions, which collect the first two years of the series (roughly). The series is about about a small town in Wisconsin where the dead begin to arise. The resurrections appear to be random and unpredictable. Since the cause of the phenomenon is unknown, the Centers for Disease Control send in a specialist to investigate, and the entire area is placed under quarantine, complete with an armed guard on the borders.

Resurrection might seem to be mystery enough, but additional questions and complications constantly pile up during the first eleven issues contained in this collection. The first resurrections catch the local police completely by surprise, naturally. But the deaths have all sorts of causes: there are murders, violent accidents, and "natural" deaths--and it's not always clear which is which, so there's a strong murder mystery element. The local police are a big part of the cast, along with medical personnel.

All sorts of other mysteries as well. The revived mostly appear unchanged from when they were alive...but some of them seem to have gone to a dark place, and there are implications that even the seemingly "normal" ones may have something going on beneath the surface. The ones who have been revived can't be killed, but they're not invulnerable. The quarantine situation changes the social dynamic in the town, which is another element that the police have to deal with. And there's the ghost-like figures that start appearing early on. It's soon established that they are real, not a hallucination or obviously supernatural. By the end of the collection they have become the central mystery (among many).

The deluxe collection also includes covers & pin-ups, Seeley's script for the first issue, and a sketchbook.

I've been reading this series in individual issues since it began, and it's also one of the few comics Kathy is reading along with me (being zombies, and all). I'm due for a series-long reread as it enters its third act; it's a big cast, and going month-to-month it's easy to lose track of who some people are. Reading it in trades seems ideal.

I wasn't aware of the division into acts: are they each a year long? If so, this deluxe collection contains the entire first act, and the next one will be the second act. Even reading all those issues in a weekend I had a bit of visual confusion, especially among two or three blonde female characters.

It's not a formal division, just something about how they're thinking about the story as they create it. I heard them talk about "entering the third act" on an interview (Wordballoon, I think) a couple of months ago. Which probably puts the issues they were talking about as the ones that were just published (which makes sense, given certain status changes at the end of last week's issue 35), and makes me think they're aiming to conclude it around issue 50.

I see. I noticed that Amazon has an announcement for the 3rd Deluxe volume in February, which I think ends with issue 35. So it looks like the first two acts took about three years of monthly issues. 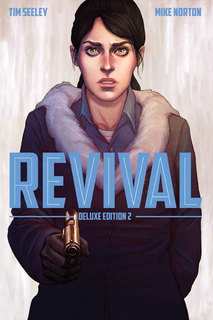 Deluxe Edition 2 contains issues #12-23 and the Chew/Revival crossover. There's no major shift in the status quo--the town is still quarantined, and the cause of the revivals is still unknown--but the storyline is far from static. Officer Dana Cypress is leading a very complicated life. She's haunted by her cover up of the murders committed by her sister Em to defend her son and ex-husband, and has come to believe that her sister was murdered on Revival Day prior to her violent death in a barn that occurred early in the series. She is trying to figure out her relationship with Ibrahim from the CDC (and he has left a complicated relationship back in Atlanta), while fighting to maintain her relationship with her son.

The ghost-like figures have come to be called "the glowing man" in addition to "ghosts," and quite a bit about them is learned. They appear to be the disembodied souls of the Revivers. If they reunite with their original body the body spontaneously combusts. But they can be killed by immersion in water, or by a Native American spiritual rite (after being caught in a spirit catcher).

Two of the Revivers have been up to no good. The unidentified Native American man who was burned in the crematorium on the first day is thought to be contained (and in an induced coma), but he is in fact moving around in the town--plus Dana suspects him of the murder of her sister. Anders (the old man who was thought to be in a coma, but was aware the whole time) has made his way to New York City, where he uses his condition to wreak vengeance upon the rich who are buying Reviver remains, seeking eternal life.

Finally, there's the Chew/Revival crossover. Very unusual to have two independent titles in a crossover: perhaps unprecedented, as far as I can recall. Tony Chu's ability to learn the history of food he ingests has clear utility in determining the history of the body parts which the Revival characters are still trying to sort out in Wisconsin. As usual in most crossovers, the events don't result in a major change in either series. Rather than doing a mashup of both series, the creative teams opted to tell two stories, each in the visual style of the original series. The stories work pretty well, even if they're ultimately inconsequential.

The collection ends with Norton's description of the process of drawing a Revival page, sketches and cosplay photos, and more Seely sketches showing the genesis of the character Em.

Two independent creations meeting up is unusual, certainly, but not unprecedented. Cerebus guest-starred in an issue of Spawn, and Usagi Yojimbo and the Teenage Mutant Ninja Turtles crossed over. (Pretty sure the Turtles crossed over with Flaming Carrot, too, and they had an authorized guest-appearance in a Munden's Bar backup in Grimjack. It's probably less likely now, though, as books like Revival and Chew are mostly concerned with really long-form storytelling, which leaves less room for fun diversions along the way.

Thanks, I had a feeling there might have been some sort of Indie crossover I had missed. Never read any of those titles regularly. I'd like to read the Cerebus guest appearance in Spawn!

It's in issue 10, written by Dave Sim, and available on Comixology for $2. It was part of a string of early spawn issues with high-profile guest writers, starting with Alan Moore in 8, Neil Gaiman in 9 (the issue in which he created Angela, starting that whole legal ball rolling), Sim in 10, and Frank Miller in 11. It was a great stunt on McFarlane's part. He was getting knocked for the writing in his book, so he hired the best writers in the business, and drew a lot of fresh eyes (including mine) to the comic.