Story   Well, we knew it was coming, but it's still incredibly sad.  One of my all-time favorites, and gone so young, too. 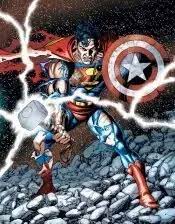 I bought Avengers #141 (N'75) off the rack when it came out and immediately knew something had changed for the better though I had no idea who George Perez was but he soon became one of my favorite artists! 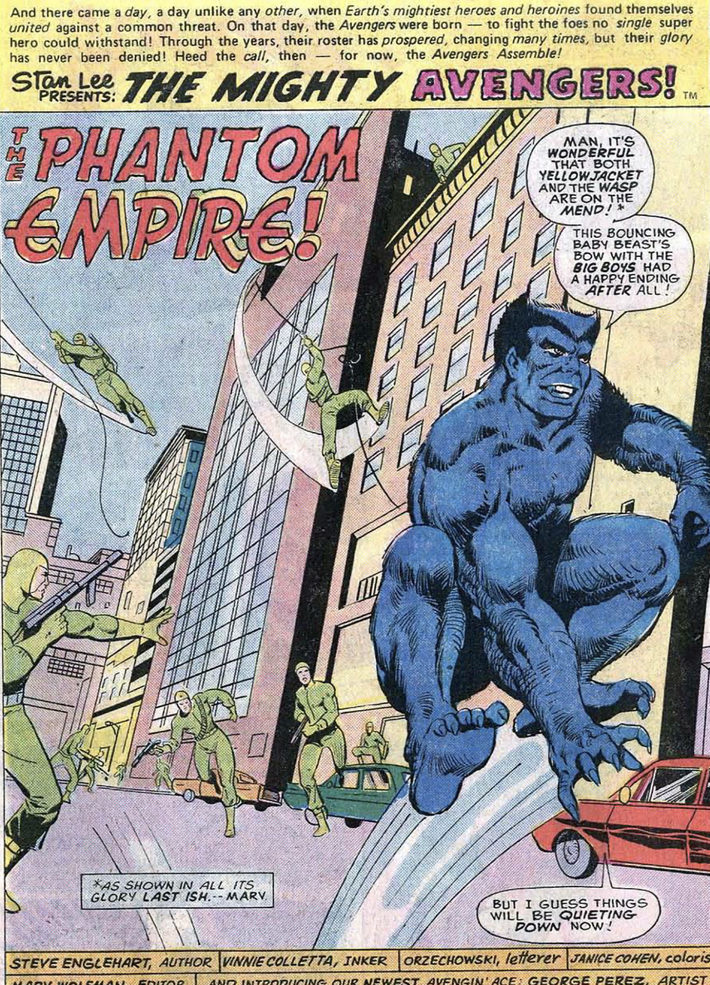 You took the words right out of my mouth. We've lost two titans of the industry for certain.

This was my first exposure to George Perez.

I've probably read everything he's ever drawn, since he didn't come along until I'd been reading for maybe 10 years. It's inconceivable that he's gone.

This is probably the first George Perez image I ever saw. He drew the cover to this issue -- Avengers 167 -- too, but looking at it, it barely registers in my memory. I must have bought this one coverless at a secondhand shop somewhere. When I think of George Perez, one of the first things I think of is Beast, bouncing in his bathrobe.

The man could -- and did -- draw anything. And he represented comics with inexhaustible good humor and grace. A few years ago, I saw him at a con appearance. I think Stan Lee was still with us, but it's clear he was ailing fast. People were talking about who comics' next ambassador to the general public would be. And hearing George's joy and love for the characters and the medium, I thought there'd be no better person to fill those big shoes. I dearly wish that had come to pass -- even if he'd laid down his drawing pen forever, if he could have been the smiling, energetic face of comics for years to come, that would have been an amazing gift.

But his presence among us for so long, and all his incredible work, is more than gift enough. ClarkKent_DC replied to Jeff of Earth-J's discussion Dark Shadows
"FreeVee used to be called IMDbTV until about a month or so ago. "
11 seconds ago

The Baron replied to The Baron's discussion The List of Super-Hero Teams
"Added the New Guardians."
27 minutes ago

The Baron replied to The Baron's discussion The List of Super-Hero Teams
"I'd almost forgotten them myself, except that Extrano turned up in a recnet DC Pride book."
29 minutes ago

Rob Staeger (Grodd Mod) replied to Jeff of Earth-J's discussion Dark Shadows
"Oh nice -- I hadn't heard of FreeVee before! I'll check it out!"
30 minutes ago

Richard Willis replied to Jeff of Earth-J's discussion Sandman (TV)
"The show has received a lot of publicity, at least online.  I recommended it to a non-comics…"
33 minutes ago

Richard Willis replied to Steve W's discussion A Cover a Day
"Why have a Circus of Crime cover without Princess Python?"
50 minutes ago

Philip Portelli replied to Steve W's discussion A Cover a Day
"Archie and Friends at the State Fair! (Now tell me which state!)"
51 minutes ago

Philip Portelli replied to The Baron's discussion The List of Super-Hero Teams
"This one just hit me: The New Guardians! (Guess I was trying to forget them!)"
53 minutes ago

Jeff of Earth-J replied to Jeff of Earth-J's discussion Swamp Thing
"ISSUE #124: Four years prior to this story, the Sunderland Corporation approached the government of…"
2 hours ago

Jeff of Earth-J replied to Cavaliere (moderator emeritus)'s discussion What are you watching right now?
"TALES OF THE WALKING DEAD: Here's a show I would have missed had not my DVR recorded "The…"
3 hours ago

Jeff of Earth-J replied to Jeff of Earth-J's discussion Swamp Thing
"ISSUE #123: After discovering Professor Johnson's murdered body in #122, Otter flees to the…"
3 hours ago