Finally! Mr. Silver Age finds a useful purpose for the precise science of bracketology: determining whether Daredevil or Wonder Woman had the goofiest rogues gallery:

Please note the original, *hand-crafted* bracket, produced by MSA himself to lead off the article. CBG dressed it up in the magazine, but they went with the down-home original online.

I don't pay any attention to basketball and brackets, but this was a clever way to set up a column and I recommend you adopt it annually. Wonder Woman's Silver Age rogues gallery is easily sillier than anyone else's, even Daredevil's, so that would be an easy one to pick as eventual winner.

Who at Marvel has a sillier group of villains than Daredevil? Ant-Man and Human Torch are easy pickings. Maybe early Thor, with Carbon Copy Man, Radio-Active Man, Mad Merlin, Lava Man, Grey Gargoyle, or Cobra and Mr. Hyde, who were so lame they later became Daredevil villains.

I'm glad you liked it, Hoy! I figured that, whether readers followed basketball or not, it was hard to avoid brackets this time of year. And even those who *do* follow it some (like me) can be astonished at how LONG these guys can talk about bracketed teams and potentially bracketed teams, etc. My only regret is that, with only four pages to work with, I could not include the full 64-goofball field (plus play-ins).

I actually did set up a play-in game, which the Crimson Centipede won (on the strength of him actually being a *green* humanoid centipede just wearing a red costume and not having much else going for him), but then lost on the technicality of having been created by Ares, going against our "no-Gods" bylaw. But I ran out of space.

I frankly could have made it an entire bracket of WW rogues to find the all-time goofiest, including a wider range of contestants, but I think the best man/egg won in any event.

Ant-Man and Human Torch are definite options going forward, although I'm surprised to hear you recommending Hank. I figured I'd go with a more surprising one this time. I may have to switch off WW, though, because Egg Fu looks pretty darn unbeatable from this chair. But no doubt Aquaman, the Metal Men and the Teen Titans (among others) can put up a pretty impressive array of goofballs for the challenge.

I could spend hours dissecting how Egg Fu would have done against various other match-ups and how he's lucky he didn't end up in the Gorilla division, but I don't have my own TV show with hours and hours of dead air to fill.

If you venture backwards into the pre-New Look but still Silver Age days of BATMAN and DETECTIVE, I'm sure you can find plenty of one-off goofballs to bracketologize against, say, all those zany goofballs that tangled with the Hulk. Actually, just about every major Silver Age superhero seems to have only one or two legitimately menacing supervillains -- Batman and Joker, Superman and Luthor, Spidey and the Goblin, FF and Doc Doom, etc. When you start looking at the rest of the gang --the Calendar Man, Bizarro, Dr. Octopus, the Mole Man, etc. -- these guys are all pretty wacko.

If you really want to shoot fish in a barrel, though, head over to the Mighty Comics Group.

If one were to push slightly forward into the Bronze Age, I think you could make a great case for Luke Cage. Most of his villains were...well, let's just say you don't see them any more.

MLJ would be a touch match-up even for WW. One of the reasons I keep the Mopee Awards to Marvel and DC is because finding goody stuff beyond them is just so darn easy. But it's tempting to match them up with an equally um, competitive gallery, such as Ant-Man.

Doctor Octopus is pretty formidable for a bracket like this; he beat Spidey several times, and he helped kill Capt. Stacy. He'd be gone in a New York minute. Certainly, though, given a long enough period, a bracket of Spidey villains (a guy named Joe, the Kangaroo, etc.) could hold their own.

Sadly, Luke is beyond the jurisdiction of my column, so he gets away with his crimes against respectability.

If you want to see a Silver Age villain powerful enough to take on both Ant-Man AND The Atom,take a look here.

Ray Palmer should have known better than to trust an ant.

A lot of it depends on what they do with what they're given. The Glop is really silly, but he attacked Wonder Girl with atomic missiles, which I would take seriously. A lot of DD's villains seemed to be kind of quirky and somewhat enhanced, possibly because Stan didn't consider him to be all that powerful and able to take on guys like Electro. He was more suited to the Kingpin.

Batman's famous rogues are quirky, but they all tried to kill him, so they feel more dangerous. But they're really just guys with playing cards, riddles, umbrellas, cat puns, goofy hats, etc. who found strange, lucky ways to trick Batman into death traps.I'm not sure the Riddler deserves any more respect than the Toyman or the Prankster, yet he gets it. 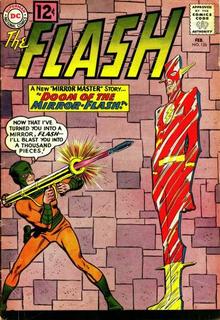 The Flash's rogues were pretty formidable, probably because he had actual formidable super-powers to contend with. 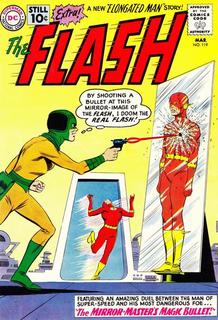 Each had a gimmick, but at least some of them, like mirrors, heat and cold and maybe the weather, were actual weapons. They mostly wanted to rob banks and put Flash into death traps that he could get out of, but they at least posed a real challenge.

Granted, Mirror Master went through a period where he liked using actual weapons, and I would contend that anyone's rogues gallery takes a step up when you give them bazookas.

Superman is famous for having the most embarrassing rogues' gallery, which is really odd, because you'd think he could have the most wide-ranging, since almost nothing is too powerful for him to face. Most of his better villains were more cerebral, owing to them being his antithesis, and he was so powerful (although he often out thought them, too).

Still, Luthor, Brainiac, Bizarro and Metallo make a pretty formidable group, it just drops off rapidly after that. TV and the comics' insistence on trying to make something out of the Toyman shows just how little potential he's got for being dangerous. So I'd say he's got some rogues, but nowhere near what he should have after 75 years.

It would be interesting to try to list the Top 10 foes for each hero and see how #10s stack up for each hero. By that point, though, we'd be pretty deep into some pretty iffy guys, and it would be a matter of how we view them. Maybe #5 would be the most telling.

Of course, recently, there's been a lot of push to make every rogue a murdering terror, so it's different comparing the Silver Age's Dr. Light who sits around chatting with Snapper to today's Dr. Light who's a father-raping psycho.

I think some additional weight should be given to the superb inking and art chores of Mr. Wally Wood. He added weight to any villian that ol’ Stan threw at DD. Just think, DD was called “ol hornhead” suggesting a bull…and so, a Matador rose to the occassion. And Stiltman WAS defeated by tripping him, but that came in his next appearance. For all intents and purposes, Stillman was gone forever when he shrink away to nothingness…and so a return/revival shouldn’t be held against him. Also, the Matador, like Stiltman, also returned in the awsome DD Annual #1.
And it can’t be Kilgraves’ problem if Stan couldn’t figure out a way for him to get out of a roll of siran wrap! Honestly, I think ol’ Mr. S.A. stacked the deck here….

PS: The Ani-men did return as well...and lo and behold, what sort of a raygun do they have to defeat DD?  You guessed it, a ray-gun that wears off over time!   I just never saw the parallel with ol' Stillman and the Exterminator before...  perhaps they both bought rayguns from the same supplier?  What do you think?

If you want to see a Silver Age villain powerful enough to take on both Ant-Man AND The Atom,take a look here.

I think if we went through DD's villians or opponents in order, one at a time, you'd start to see Stan Lee's thinking process. That is, we're looking for opponents who either 1) Can't effect DD (cause he's secretly blind, you know) or 2) presents a legal challenge to Matt and Fogg, or 3) are a logical counterpoint to the image of DD...horned, red, acrobatic, cane, billy club, etc.  Plus there are a few cross-overs from some other title's rouge's gallery.  Anyone care to take up this challenge and try?

Once you get past the Red Skull, Capt. America's villains are fairly ludicrous (Batroc, MODOOK, Dr. Faustus). As Dave Blanchard said, most heroes have one truly menacing villain -- for the Silver Age Daredevil, it was probably the Owl or the Jester -- and the rest are just filler.

Stan Lee must have realized how lame most of DD's early foes were. Leap-Frog made a total of two appearances in costume during the Silver Age (both in 1967). Ditto for the Matador. Killgrave went missing for 8 years, until Gerry Conway and then Jim Shooter made him more formidable in the '70s.

But the lamest villain TEAM must be the Ringmaster and the Circus of Crime. As one of his henchmen told Howard the Duck: "Heck, we're not even good at it! Compared to a Dr. Doom or a Red Skull, we're a joke!" Or words to that effect.

I followed your link to the 7th Teen Titan's cover, and you know, my first impression was that I was looking at DC's version of Arcade.... or vise versa, that Marvel imitated him.  What do you think? I know nothing more of the Mad Mod.