The cover to Muhammad Ali, Kinshasa 1974 uses both a photo and an illustration, which is a taste of what’s inside. (Photo by Abbas, art by Rafael Ortiz, Courtesy Titan Comics)

I’m talking about Muhammad Ali, of course, who was a heavyweight boxing champion, activist, poet, philanthropist, philosopher and, above all, a professor of “the Sweet Science.” He’s also the star of a new graphic novel from Titan Comics, due in February.

I should note this isn’t the first time Ali has been the star of a graphic novel. He’s headlined several others already, including one in 1978 where he fought Superman. And won. Because of course he did.

But what Titan has planned should put all those previous efforts in the shade. (Except maybe the Superman one, whose sheer oddness may never be equaled.) Muhammad Ali, Kinshasa 1974 blends artwork and photographs from what was the most-watched, live television event of its time: The World Heavyweight Championship, nicknamed “The Rumble in the Jungle,” between Ali and George Foreman on Oct. 30, 1974, in the country formerly known as Zaire. (It’s called the Democratic Republic of Congo now.)

Yes, I said artwork AND photos, with a story by French comics writer Jean-David Morvan (Spirou & Fantasio, Wolverine). When Titan offered me the opportunity to ask the author some questions by email, the first one I had was, basically, “What the what, now?”

“It all comes from one night when I was bored at home watching television,” Morvan wrote, in better English than mine.  “I looked at my comic book and photo bookshelves and thought to myself: ‘Hey! I like both disciplines, what if I do comics about photographers?!’ As Magnum Photos is an agency that groups together many photographers that I love, I looked for contacts on their site (French and American) and I just wrote it down. Words, art and photos come together to suggest the excitement that built before the match. (Photos by Abbas, art by Rafael Ortiz, Courtesy Titan Comics)

“A few days later, Clément Saccomani, who worked in Paris, replied; we met and that’s how the comic Magnum project was born,” he continued. “You always have to start in the simplest way, sometimes it works.”

The sound you hear is thousands of readers slapping their foreheads and saying, “Now why didn’t I think of that?”

But Morvan didn’t start with Ali — he built up to him.

“We made a comic on Robert Capa, one on Henri Cartier-Bresson, one on Stene McCurry, a graphic book on Raymond Depardon, and the Ali by Abbas is the fifth,” Morvan said.

“Abbas was the director of the Magnum Foundation, he supported the creation of the overall project. It was great to make a book with him, especially since his photos and his story at the ‘Rumble in the Jungle’ was great!”

For the record, the late Abbas (he died in 2018) was a world-renowned photographer, originally from Iran. The “Rumble” photos are directly from his personal archive, where they rubbed shoulders with his photo chronicle of the Iranian revolution.

So that’s two-thirds of the project accounted for. Argentinian artist Rafael Ortiz (Crossed, God Is Dead) came in later. 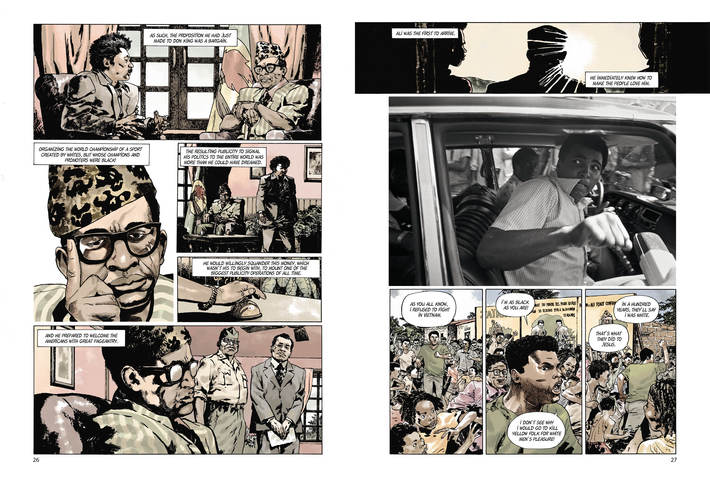 The left-hand page illustrates a negotiation between Don King and Mobutu Seke Seso — surely one of the unlikeliest meetings of all time. (Photos by Abbas, art by Rafael Ortiz, Courtesy Titan Comics)

“It’s a looooong story,” Morvan wrote, “because Rafa was not the first designer approached for this project. Besides, I didn’t know him yet when we set this graphic novel in motion. But the designer who started had to stop for personal reasons and Rafa finally took his place after a few months. I had written the script without including the photos, so Rafa, in his storyboard, decided where to place them. They become integrated naturally.”

And the result is gorgeous. The photos are eye-popping, as was the event itself. Meanwhile, Ortiz will sometimes lead up to the action in the photo and follow it afterward. That’s the integration, a graphic story with photos as exclamation points.

But it’s not a story if it’s just a bunch of pictures and drawings, no matter how beautiful. Morvan’s job was to bring this historical event and its lead characters to life. Which isn’t the easiest thing to do with a story where most of the principals are long dead, and even the country doesn’t exist any more.

But for Morvan, the research necessary was a feature, not a bug.

“What interested me was that, through the paths of the main characters of this book, we could tell the state of the world at that time,” he wrote. “This comic is much more than the story of the match. And this is often the case in big sport stories. The narrative scope goes beyond the strict framework of a match or a performance.”

Not that the sports story wasn’t dramatic. Ali  had suffered a four-year ban from the ring, and was angling to get his heavyweight title back. Standing in the way was Foreman, regarded as one of the hardest hitters in the history of boxing. Ali, at 32, was practically ancient in boxing terms, and definitely the underdog against Foreman, who at 25 was in his prime.

Meanwhile, as Morvan astutely observes, the story is about more than boxing, with big international names involved. The legendary Don King, with his even more legendary hair, was the promoter. Mobutu Seke Seso, the dictator of Zaire, offered up the platform in the hopes  it would generate good publicity for his regime. Stepping up with the purse was, of all people, Moammar Gaddafi, the dictator of Libya.

“Colonel” Bob Sheridan did play by play, while color commentary was provided by football star/actor Jim Brown, former heavyweight champ “Smokin’ Joe” Frazier and English journalist/TV host David Frost. It seems like everybody at this event was somebody.

Even the music! It came courtesy of the Fania All-Stars. In 1974, they were regarded as among the top salsa/Latin performers in the world. And how did the match turn out? Well, if you don’t know who won after 46 years, I’m not going to spoil it for you now. But I’m not spoiling anything by noting that it was  enormously successful. The fight grossed an estimated $100 million — real money in 1974 — and was watched by an estimated one billion viewers. That was a fourth of the world’s population in 1974, and includes 50 million who paid for the privilege on closed-circuit theatre TV.

So Morvan had his work cut out for him. The “Rumble” isn’t an event to take lightly. Even the orange juice anecdote, which Morvan alludes to, but refuses to explain.

“I won’t give it away here, but it’s a very funny moment in the story,” he said. “These really are the kind of personal anecdotes of photographers that make the story unique and avoid repeating the same story over and over again.

“For the rest, I gathered a lot of information and the main difficulty was to arrange all the narratives to make sure the story has a good rhythm and  that the reader never gets bored.”

From the look of the finished pages, boredom doesn’t seem to be an option.

“I must admit that I’m very pleased with this album, which is my first foray into sport,” Morvan wrote. “And if you’re going to start, you might as well do it with the GOAT, the Greatest of All Time.”

Muhammad Ali Kinshasa 1974 is available for pre-order at Amazon and Forbidden Planet. Find Captain Comics by email (capncomics@aol.com), on his website (captaincomics.ning.com), on Facebook (Andrew Alan Smith) or on Twitter (@CaptainComics).