'Saga' cleans up at Harveys -- and deserves it

Sept. 10, 2013 -- Entertainment awards aren’t necessarily a guide to the best a given field has to offer, and comics aren’t any exception. But this year’s Harvey Awards give me an excuse to write about one of the best books out there.

The Harvey Awards – named for Harvey Kurtzman, creator of MAD, among other things –aren’t the “Oscars” of comics. That would be the Eisners, bequeathed at Comic-Con International: San Diego every year. But the Harveys, currently awarded at the Baltimore Comic-Con, are still very well respected. And this year’s Harveys, awarded Sept. 7, were dominated by a new book at Image Comics called Saga, written by Brian K. Vaughan and drawn by Fiona Staples.  Saga won six Harveys: Best Writer, Best Artist, Best Colorist, Best New Series, Best Continuing or Limited Series and Best Singles Issue or Story (Saga #1). And as it happens that Saga Volume Two (collecting issues #7-12, $14.99) is on my to-review pile, this seems like as good an excuse as any to talk about it.

On one hand, Saga is pretty conventional. It’s a Romeo & Juliet love story, albeit set in space. Alana comes from Landfall, a planet with advanced science where everyone has wings. Marko comes from Wreath, Landfall’s moon, a civilization that runs on magic and where everyone has horns on their heads. Landfall and Wreath have been at war for centuries, using proxies instead of destroying their own worlds, in a huge conflict spanning the universe.

That’s a perfectly ordinary sci-fi set-up, allowing for any number of strange creatures, exotic cultures and bizarre concepts, all interplaying with each other. Plus, Marko and Alana are being pursued by both sides as traitors, adding a dollop of the heroes-on-the-run anxiety of The Fugitive or the one-long-chase-scene angle of The Terminator.

Where Saga is exceptional, though, is in the storytelling. Vaughan, already well-regarded for the Vertigo series Y: The Last Man and the graphic novel Pride of Baghdad, is at the height of his game here. And Staples, heretofore not very well known, brings a fresh style not found anywhere else. Together they have wrought a unique book whose charm is difficult to describe. 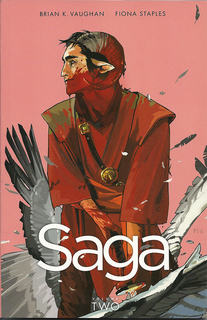 First, Saga #1 opens in a unique place: Alana giving birth to the couple’s child. So already Vaughan has skipped over the traditional territory of the romance story, the courtship. That is told in flashback over time, but the story focuses on the two as a couple, acting like couples do: arguing, having sex, bickering, snuggling, laughing, crying. It’s not only unusual – Star Trek crossed with I Love Lucy – but refreshing. Lord, I’m tired of reading coming-of-age stories!

Also, the story is narrated by the couple’s child as an adult. That violates another rule of adventure storytelling, by informing the audience a given character will survive. On the other hand, though, it gives the story some stability – it raises the obvious question “how does she survive?” – and there are no such guarantees for horn-headed Marko and wing-backed Alana.

Nor for the supporting characters, who are already head, shoulders and strange appendages above the usual derivative aliens we’ve become accustomed to in space operas. There’s the couple’s babysitter, a ghost of a girl who lost her bottom half to land mine (and it shows). There’s a race with televisions for heads, which gives additional information about their troubled prince, who is awaiting the birth of his first child and is having sexual-performance issues. There are two bounty hunters with a romantic past, an all-white woman with a spider for a body and The Will, about whom we know little, except that he’s a terrible bounty hunter. And he has what I vote Character Most Likely To Be Marketed, the Lying Cat – a lion-size feline who announces “LYING” whenever anyone in its presence is telling an untruth.

Honestly, there’s a clever concept or funny idea on nearly every page, like the spaceship made out of a tree who cannot be told what to do, but can only be asked nicely to take you where you want to go. There’s a pregnant planet, whose midwives have upside-down heads and spit black goo. Oh, and the breakout star of the entire second collection is Alana’s new mother-in-law, whose dialogue is both hilarious and wince-worthy to anyone who’s ever had a disapproving in-law.

Another refreshing angle is the utter, basic normality of the characters – which makes this book completely unsafe for kids. Alana has a mouth that would embarrass a sailor, especially during sex. And, yes, there’s a lot of sex – not only between our young, attractive and hormonal stars, but other characters who have relatively normal sex lives, to which we are privy when it informs the story. These are ordinary people, who cuss and have sex and make mistakes and have arguments over stupid things. It’s funny, fresh and a story that brings true meaning to the phrase “for mature audiences.”

All of this would be wasted words on a screen if it wasn’t for Staples, whose designs are both amusing and functional, and whose storytelling grounds this story in fundamentals. Her skill makes this bizarre tale accessible, even to people not normally drawn to sci-fi stories.

Who, I admit, may not like Saga. Even some comics fans, some on my website forum,  complain, “I just don’t get what the fuss is all about.”

I understand. This story isn’t about good vs. evil, or big, galaxy-spanning events starring the ragtag band that will save the universe. No, it’s about two characters on the fringes of such events, who want nothing so much as to get out of this story and just live their boring, ordinary lives.

I believe that what “Saga” is, at its heart, is the anxieties and joys of being a parent. Vaughan described the book jokingly to The Hollywood Reporter as “Star Wars for perverts," but I think it’s more like “Star Wars for grown-ups.”

And if you understand that, you’ll probably love Saga too.

GO HERE for the press releases we've received about the Harveys.

Cap, you're right about everything in this article- Saga is great, and the Lying Cat is the character most likely to be marketed.  Actually, I think Holly Simpson has already bought a Lying Cat T-shirt.

Yes the Lying Cat t-shirt does exist. I've got one myself.

A great series as well.

Count me among the slightly underwhelmed. I've only read the first collection. I enjoyed it, but I'm not especially anxious about getting to the second one. I'm actually more excited about The Private Eye, his digital comic with Marcos Martin.

To tell you the truth, Mark, my eyes started to glaze over around issue #6 or #7. Then the MIL arrived and I was chortling through the rest of the book.

The charm of Saga is elusive and subtle, especially given that Vaughan eschews big set-pieces. So sometimes it can come off a little too quiet.