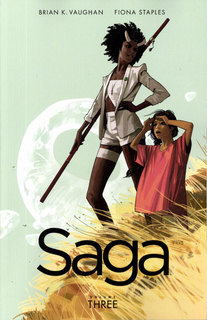 When we last saw our young family they were in a lighthouse on the planet Quietus, hiding from the newly-arrived Prince Robot IV. Vaughan and Staples make us wait for it, by first taking the story line back to their earlier arrival on the planet. It had been a few weeks since Marko's father died, and their space craft finally arrived at the home of novelist D. Oswald Heist. It was Heist's book A Nighttime Smoke that convinced Marko and Alana to ignore the traditional rivalry between their species (which resulted in their military desertion and the birth of baby Hazel--basically, the beginning of this saga).

As Hazel's narration points out, there were others hot on their heels. In addition to the Prince, bounty hunter The Will and Marko's old flame Gwendolyn were also in pursuit. They were stuck on a nearby planet waiting to get their ship repaired. Turns out there's a complication: a parasite on the planet called Heroine, which causes hallucinations. This explains some of the odd things the group has been seeing, but not in time to prevent The Will from being attacked and seriously injured.

And there are a couple of new players: journalists Upsher and Doff aren't buying the official line that Alana was kidnapped. Their investigation leads them as far as Alana's old military commander, Countess Robot X. Then their story is killed--almost literally--by a Freelancer who doses them with a poison called Embargon (clever name) which will kill them if they say another word about Alana and company. The journalists may be out of the picture from here on, but there are clearly powerful people extremely interested in their subject.

When the story finally returns to the scene of the previous collection's climax, all hell breaks loose. And in the final pages the story jumps ahead. I'd say about two years, because baby Hazel is now standing up, looking like she has just learned to walk.

Thanks for reminding me this has been out for several months and I need to go buy it!