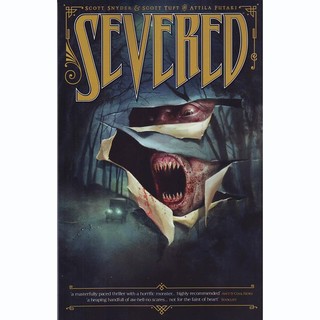 Severed reprints a 2011 seven issue Image miniseries, co-written by Scott Snyder & Scott Tuft, with art & covers by Attila Futaki. There's been considerable fanfare about Snyer's recently announced Image project, but this one appeared about a year after American Vampire debuted, and before all of the even higher profile work that followed. Tuft's prior writing experience was in screenplays, and Futaki is best known for the graphic novel adaptation of Percy Jackson and the Olympians: The Lightning Thief.

It's a horror story featuring an especially horrific monster, a man with razor-sharp, shark-like teeth who apparently eats people and sometimes steals their identities. The hero is twelve-year old Jack Garron, an adoptee who has run away from home to join up with his birth father, an itinerant musician.

As the story opens we meet Jack as an old man. He receives a letter that reminds him of how he lost his right arm, and the story proper begins in flashback, in the year 1916. While Jack runs off and jumps a train, the man calling himself Mr. Porter picks up an orphan at an orphanage, promising him an apprenticeship. Jack soon finds life on the road difficult, but the orphan is in far worse trouble. Porter reveals his true nature to deadly effect. We are spared the actual murder scene--this is not the print equivalent of a splatter film--but the end result is horrible enough.

Jack and his road companion Sam (short for Samantha; she's passing as a boy) discover that Jack's father has gone south, and begin busking on the street to earn train fare. Inevitably they meet Porter--now going by the name Alan Fisher, who he murdered--and accept his offer of a ride.

Futaki's style is well-suited to the turn of the century setting. He's more of an illustrator than a cartoonist. I can imagine a stylized horror artist like Ben Templesmith illustrating the story, but this flatter, realistic look conveys its own sense of dread.

Samantha remains deeply suspicious of the old man. Jack assures her that he trusts her, and the two share a kiss. This marks her as doomed in any standard comic book plot, so I was disappointed when things played out just as expected. It leaves Jack and Fisher as traveling companions, which certainly focuses the dramatic conflict. On the road Fisher reveals his violent side when Jack becomes entangled with a prostitute and her pimp. And as the two are packing, Jack discovers his wallet in Fisher's luggage, a major indicator that Fisher has been lying to him.

I read this when it first came out, and I thought it was really good. I too was disappointed that Sam's story ended up taking the most obvious route. I found her more interesting than Jack.

Convinced of Fisher's evil intent, Jack confronts him and cuts him with a knife. He escapes in their car and heads for the address of his father's house, sure that he has given Fisher an erroneous address that will throw him off the track. Instead of a reunion with his father, he is met by Fisher. Turns out that Fisher had lured him there from the beginning, using information he found while picking up his earlier victim at the orphanage.

Fisher has already removed Jack's arm when Jack's foster mother Katherine arrives, brought there by a letter from Samantha (so she gets a little revenge from the grave). Fisher drugs her, but in the meantime Jack has gotten untied and forces him into the basement. The pair is about to escape, but Jack returns to the house to finish Fisher once and for all. He leaves the house ablaze, which should be the end.

But remember that letter that launched Jack's trip down memory lane? It contained the charred remains of his father's photograph, which should have been consumed along with Fisher and the house. Jack runs outside into the sunshine--nice shift from dark shadows to bright daylight in the art--and loses track of the old man in a crowd. It is a final reminder that some things cannot be explained, and pure evil is still out there somewhere.