On the old Ask Mr. Silver Age forum at CBGXtra.com I reviewed more than 40 volumes of the DC Showcase Presents series and kept track of upcoming volumes, based on listings at Amazon and on the DC Comics website. Craig has asked that I continue that here at the good Captain's board, so here we go. There's some good reading ahead for Silver Age fans, and also a couple of head-scratcher selections. 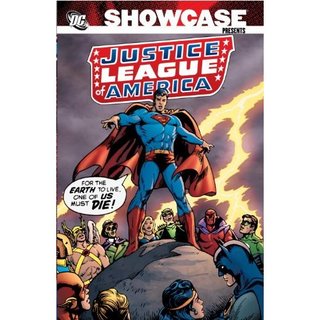 February 23, 2011
Showcase Presents: Justice League of America, Vol. 5
$19.99
528 pages
In this value-priced volume collecting stories from issues #84-106, The JLA battles BLACKEST NIGHT villain Solomon Grundy, meets Deadman, faces a cosmic vampire, and teams up with both The Justice Society of America and The Seven Soldiers of Victory. 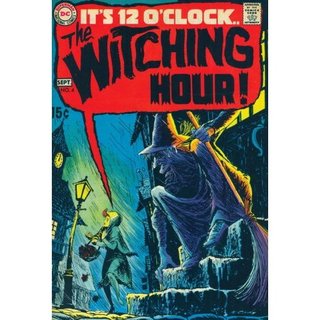 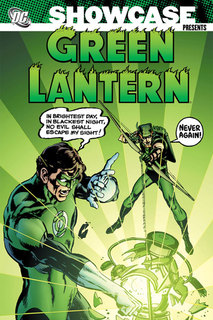 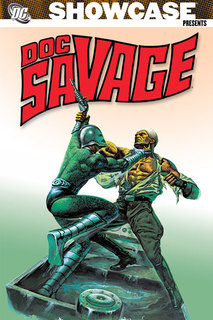 August 3, 2011
Showcase Presents: Trial of the Flash
$19.99
592 pages
Following the murder of The Flash’s wife, Iris, by his greatest foe, The Reverse-Flash, the two costumed characters are locked in a round-the-world race and battle – one that ended in the death of the evildoer. This is only the beginning of a startling chain of events for The Fastest Man Alive, as he is arrested on a charge of murder. A police scientist himself in his civilian identity of Barry Allen, The Flash begins to build his defense. But when his famous Rogues Gallery of villains decides to get revenge for the death of one of their own, The Flash must battle their patsy: The massively powerful villain called Big Sir. And that’s all before the trial even begins. Collected from THE FLASH #323-327, 329-336 and 340-350. . . 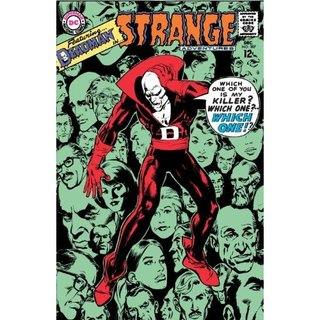 May 11, 2011
Deadman Vol. 1 [Paperback]
$19.99
176 pages
Master comics artist Neal Adams illustrates the original adventures of deceased, revenge-driven hero Deadman, one of the heroes of BRIGHTEST DAY, from STRANGE ADVENTURES #205-213.
These are the stories that introduced costumed high-wire performer Boston Brand, who is assassinated by an unknown marksman in his first adventure, only to return when mysterious deity called Rama Kushna gives him a mission: find his murderer! 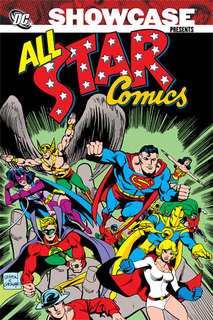 Witness the continuing adventures of The Flash, Green Lantern, Hawkman, Dr. Fate, Wildcat and the rest as they are joined by younger heroes Robin, Power Girl and Star-Spangled Kid! The Justice Society's battles with the Psycho-Pirate, the immortal Vandal Savage, the Injustice Society and more. 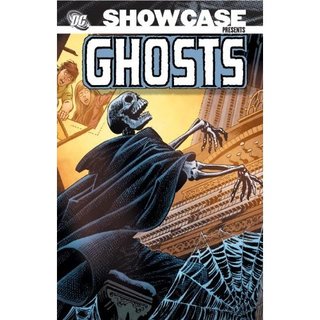 Ghosts "True Tales of the Weird and Supernatural" was a hit DC comics which ran from 1971-1982 featuring the work of several comic greats.

Reprinting tales from DETECTIVE COMICS #391-407 and BATMAN #216-228, this value-priced collection includes the introduction of Man-Bat and Batman's battle with The League of Assassins. 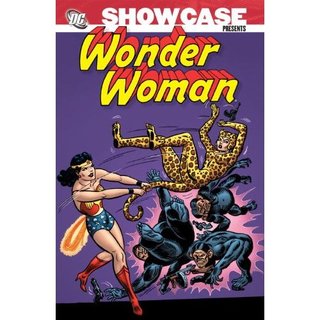 In this fourth collection of Wonder Woman stories from the Silver Age of Comics, the Amazon Princess faces Giganta - The Gorilla Girl, Cleopatra, Mister Blizzard and many more! 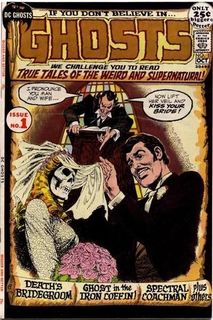 With no Showcase Presentses scheduled for August or September, DC comes out with its first Ghost collection in October 2011, just in time for Halloween.

Actually , I hope that this might include the text pages ( This was one title that stayed with text stories , not letter colums , well into the 70s ( Which , of course , was when it started , so that's not quite a correct metaphor here ! ) , especially for the reason of one specific tp that ran within this title - which , for a clue , indirectly touched upon somethhng/someone that recently celebrated its centennial .

...This site tends to jump to/I tend to jump to the most recent posts/page , so I've since had what I assumed anyway confirmed , that the Ghosts book is a Showcase , as I saw that when I went back to follow the complete trail of posts .

To make up for that I'll give you a clue as to what my desired text page may involve by referring to a James Brown song from the Seventies:

Permalink Reply by Dave Blanchard on February 23, 2011 at 7:53pm
I always found GHOSTS to be the least interesting of the DC mystery titles, but I don't think I've ever seen the 52-Big-Pages era issues, so this one might be worth at least a drive-by flip-test at the library. The GCD suggests that most of the art is by the likes of Tuska, Grandenetti, Calnan and Saaf, none of whom impress me, but there also seems to be a decent smattering of Tony DeZuniga, of JONAH HEX and CONAN fame, plus some reprints from DC's ancient SENSATION title, so since I've read all the other SP mystery volumes, I'll probably give this one a read, too.

Ghosts was a bit of an anomoly as it had no host nor any continuing features. There was a three-part Spectre/Doctor Thirteen story in #98-100 though that won't reprinted for a long while. It was definitely on the bottom of DC's long-running suspense/horror books. That being said, I read a few issues back in the day and they were creepy and scary! So I'll be getting this one, too!

BTW, I bought #98 when it first came out with its Jim Aparo Spectre cover but only got #99 &100 last year when I visited my cousins in Rhode Island!

Permalink Reply by Dave Blanchard on February 23, 2011 at 11:49pm
The thing that always bugged me about GHOSTS was its tagline of supposedly being "true tales of the. weird and supernatural." I doubt that any of those stories had the least bit of truth behind them, but it always made them seem tame and watered down to me, as opposed to the Orlando HOUSE books, which made no pretense of being true, just being spooky. Also, at least in the early years, GHOSTS seemed to be mostly written by Leo Dorfman, who was fine on Superman family stories, but seemed out of his element on the creepy stuff. Of course, if Dorfman had had the likes of Wrightson, Alcala and Adams drawing his material, we probably would think he was one of the all-time great weird writers.

this one might be worth at least a drive-by flip-test at the library.

I hope there's still time to add this blurb to the back cover.

I doubt that any of those stories had the least bit of truth behind them, but it always made them seem tame and watered down to me.

I can't imagine they actually were based on true stories, as that would imply an extra effort to track down real stories as the base. Ideally, being true would give them more leeway to be watered down, because then a little spookiness would seem more credible. Unless they were full of facts, I doubt too many readers took that at face value--but if they really weren't, I don't know why they'd say it and weaken their credibility.

I agree that those spooky stories seem a heckuva lot better when the artwork is atmospheric. Just adding their layouts and style provide spookiness, and that's all a lot of those stories could offer.

ED, the threads open to the first page, unless you click on the name on the far right of the person who posted the last message. Hoy adds each new solicitation to his original message, which continues on each page. So the full list of solicitations is at the top of every page. Ideally, as some come out, he can delete those, as otherwise the opening message will sometime take up the entire page.

I can't imagine they actually were based on true stories, as that would imply an extra effort to track down real stories as the base. Ideally, being true would give them more leeway to be watered down, because then a little spookiness would seem more credible. Unless they were full of facts, I doubt too many readers took that at face value--but if they really weren't, I don't know why they'd say it and weaken their credibility.

There was one fact I took at near-face value at the time. There was a story of a father going to his daughter's college graduation, and then realizing that she was dead when only her outline shows up in the pictures... since ghosts can't be photographed! That truism has always stuck with me. I don't think I ever thought it was a real-world truth, but for quite some time I did think it was a rule stories had to adhere to.

Permalink Reply by Captain Comics on February 25, 2011 at 5:47pm
I always wondered why vampires were always impeccably dressed and well-groomed, given that they can't see themselves in mirrors.

Permalink Reply by Rob Staeger (Grodd Mod) on February 26, 2011 at 2:38am
I'm wracking my brain about this, but all I can think of is the Phunky Phantom for some reason.


I always wondered why vampires were always impeccably dressed and well-groomed, given that they can't see themselves in mirrors.

Queer Eye for the Dead Guy?