Shows You Were Forced To Watch When You Were a Kid

While I was posting to another thread, (Mary Hartman, Mary Hartman) I recalled several TV shows that I had no choice but to watch, because my grandparents watched them, and I had no control over what was on. I was interested in what you folks had to endure, and how you feel about those shows today. Admittedly, I can watch a few today and think "not as bad as I recalled", but some I still can't see the point of.

One show was a local broadcast called "Polka with Frank Knight". Sure I get that my grandparents loved to polka, but, I would have much rather have found something else to do during that program (no, this is a family show, so you will watch it!). The format was very simple. Each week, local celebrity (?) Frank Knight would introduce this weeks polka band from the studio (actually, the studio looked more like a church basement or a union hall) encouraging the audience members to dance. The audience was typically comprised of senior citizens, with the occasional grandchild under the age of six. The camera would pan between the band and the dance floor. In between songs, Frank would interview the band members ("So, where will you be playing next?). I just can't tell you how much this show drove me up a wall. The dance floor was generally packed, with one notable exception that I can recall. On this particular date, only two elderly couples showed up (as I recall, tickets were very cheap). I remember feeling both thrilled and ashamed that night. On the one hand, this could be the end of this dreck (it wasn't. The show dragged on for years thereafter. I remember my grandmother commenting on an article in the paper that explained the poor attendance). On the other hand, obviously this was a show my grandparents loved, and I didn't want to see them lose it. Catch 22.

I used to put a tape recorder next to the TV when Star Trek was on!

We didn't have a color TV when I was at home, so when I started watching Star Trek it was in B&W. There are ST episodes that I didn't see in color until I watched them on DVD in recent years. These days it's hard to believe, but color TVs were pretty expensive when they first started. Also, it was several years before color TV broadcasts became standard.

In fairness, even All My Children was in black-and-white when it debuted ... in 1970!

It may have actually started off as a radio show. I've heard old broadcasts, essentially commercials for Tide or Borax type soap products that feature various characters in crisis mode (I don't know what to do Betty. My husband has a big interview tomorrow, and if he doesn't get the job we'll be ruined! Relax Mary, he needs to look his best, so do what I do and use Tide....). The commercials generated so much response over Betty's problems that they began to expand into full episodes (with generous product placement, of course). The story lines eventually overtook the products, and there you have it.

Some soaps started out as radio shows, like Guiding Light, but All My Children didn't. The ones that moved from radio to TV were around in the 1930s at the advent of television. All My Children came along in 1970; by then, there were few, if any, radio shows.

Speaking of All My Children, there was a period when I had a 3-to-midnight job, so I was home during the day and watched TV before I went to work. I saw the entire run of St. Elsewhere that way, because one local station carried it five days a week. I also saw the early episodes of Mission: Impossible -- the ones before Jim Phelps was the leader.

And, after watching the noon news, I got in the habit of watching most of the ABC soap opera lineup: Loving, All My Children, and One Life to Live. (I had to get to work by the time General Hospital came on, so I never got into it.) 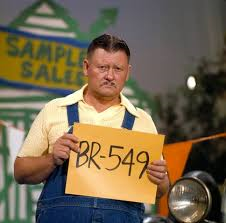 "But were you a-pickin' and a-grinnin' at the Empty Arms Hotel?"

I had to watch whatever my father wanted to watch.  He came home and took control over the television.  That meant all the Westerns on TV.  I hated Bonanza and Gunsmoke.

He also watched the Braves play baseball.  This was back when they were terrible.

But he did watch some good shows.  We watched Ed Sullivan, Flip Wilson, The Beverly Hillbillies, and Sanford and Son.

I was glad when I got to stay and he went to bed.  Then I watched what I wanted.  Like Shock Theater.

As much as I loved Westerns as a kid, Bonanza and Gunsmoke just didn't do it for me. Let's face it, neither show could hold a candle to the worst John Wayne film.

There were shows we watched, up to a point, that I did enjoy as well. I loved SWAT (up until I woke up from a nightmare one evening. My grandmother became convinced it had something to do with having watched SWAT. We seldom watched the show after that). Another show I remember enjoying was The Blue Knight. That viewing habit came to an end when one episode featured the lead character questioning suspects in a gentleman's club. Sure, it was '70s era show (not very graphic by today's standards) but again, my grandmother was having no more of it, after that.

Come to think of it, these were the days before VCRs were common; so, the whole family was forced to watch commercials. I don't think any of us really enjoyed those (except my aunt who got the biggest kick out of hearing those two girls exclaim "and we helped" when their mother pronounced she had made Shake and Bake chicken).

I had to watch whatever my father wanted to watch.  He came home and took control over the television.  That meant all the Westerns on TV.  I hated Bonanza and Gunsmoke.

He also watched the Braves play baseball.  This was back when they were terrible.

But he did watch some good shows.  We watched Ed Sullivan, Flip Wilson, The Beverly Hillbillies, and Sanford and Son.

I was glad when I got to stay and he went to bed.  Then I watched what I wanted.  Like Shock Theater.