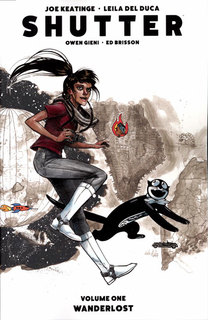 Science fiction, fantasy, steampunk, and adventure meet in the world of Shutter. It’s an Earth so different from ours that it almost has to be seen as an alternate Earth--but all of the craziness is presented as if it’s completely normal and expected. Our heroine is Kate Kristopher, who was born into a family of explorers: the series opens with her on the Moon, where her father has taken her for her seventh birthday. When the story proper begins it is exactly twenty years later, and Kate has walked away from exploring, as well as a successful career writing children’s books.

In fact she looks completely aimless. But while visiting her father’s grave (it’s a birthday tradition) she finds herself under attack, and everything changes. On the run, forced to rely upon her adventuring skills...plus there’s an enigmatic warning about her “other siblings,” a big surprise to one who thought she was an only child. When she returns to the family home looking for answers, she receives one shock after another. Apparently just about everything she thought she knew about her family’s history is wrong. However well-meaning the deceptions may have been, she now has no idea who to trust.

Nothing like big family mysteries to set up a series. And then there are the fantastically creative character and set designs. Where else would you see a New York City with aliens and pterodactyls, a wide variety of animal-human hybrids, a Victorian steampunk robot, and a talking skeleton butler? For all the wild cartoon invention, the action can be quite violent: the casualties really pile up at a couple of points in this first arc. And it has one of the best cliffhangers I’ve seen recently.