And here's what you missed in the final issue of Siege...Siege! 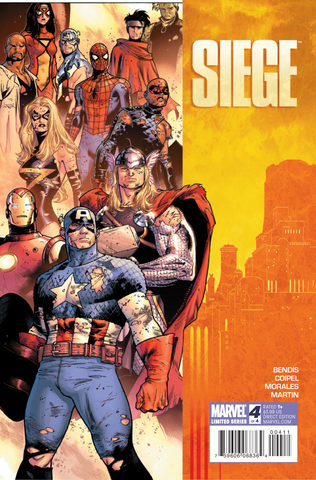 Some of the things you're talking about will be story fodder for Avengers Prime. Thor and Tony had some words in the FCBD issue and more will be coming in Fraction's Invincible Iron Man.

Permalink Reply by Cavaliere (moderator emeritus) on May 14, 2010 at 5:08pm
For me, the writer is the make-or-break on a story. I'll buy a book that has bad art if the writing is brilliant but not bad writing with brilliant art.

Permalink Reply by The Baron on May 14, 2010 at 5:30pm
I think that what we need is a hundred page, giant-sized comic in which the whole thing is Popeye, Sailor Moon, Abraham Lincoln, the Six Million Dollar Man, Mammy Yokum, King Hippo and the Bizarro Bonnie Franklin all beating the living s*** out of Iron Man.

I think that what we need is a hundred page, giant-sized comic in which the whole thing is Popeye, Sailor Moon, Abraham Lincoln, the Six Million Dollar Man, Mammy Yokum, King Hippo and the Bizarro Bonnie Franklin all beating the living s*** out of Iron Man.


I would pay good, cash money to see that.

Permalink Reply by Captain Comics on May 14, 2010 at 7:13pm
I was really looking forward to the end of Siege, and even avoided potential Spoilers online (which I almost never bother to do). For the most part I enjoyed it, although I did find it a little anti-climactic. Here are some specific thoughts as neurons fire randomly in my head:

* Did anything at all happen in Siege: Embedded? Or at least anything that deserved its own miniseries?

* Sentry: Fallen Sun may be the worst comic book I have read in my life. The Rogue scene alone was stunningly stupid, and made me throw up in my mouth a little (especially since it was played cutesy). I agree with everything that blogger said, times about a billion, billion exploding suns. Not only was it a ham-handed, tone-deaf retcon, but did all of our heroes forget that The Void was a mass murderer? No, no, he was a swell guy. The swellest ever!

* I was delighted to see the Warriors Three survive. When last we saw them fighting Bullseye/Hawkeye I thought "that's it, because like The Sentry, certain writers are determined to show us that Bullseye is the awesomest character ever, so he'll end up killing these characters."

* Speaking of awful characters that Marvel seems determined to make us read about, the escape scene with Daken (where he kills a U.S. Army guy from behind for virtually no reason) reminds me that I never, ever want to read about this guy again, and really, really want him killed in some horrible fashion. But, no, he escapes grinning in a sports car, and I suppose we're supposed to be going OMGZ HE IS TOTES KEWL when I'm actually a little nauseous.

* I'm sure there are some who will consider Count Nefaria a bad father. But it occurred to that he has a point: His prodigal daughter appears on his doorstep, and five minutes later he's getting pounded by the Avengers and arrested. I'd avoid her, too.

* I also agree with Nefaria's assessment of Parker Robbins. The guy has always been a putz, and I never took him seriously as a Big Bad. He's another character the writers had a fetish for that the readers never did. Was he a Paul Jenkins creation too?

* Although I also wanted an answer to Hood's question. If Nefaria has all these superpowers, why does he need money? Can't he just steal what he needs? *shrug* There's management for ya.

* I was really surprised by Loki getting the axe. That's going to change the dynamic of Thor's series pretty seriously. Which may not be a bad thing. And will Balder still be king? Who's got the Odin-power? What's taking Asgard's place in the Nine Worlds? Interesting.

* Also, it turns out crazy ol' Hank Pym was right -- the Avengers needed Loki for the win.

* Speaking of our erstwhile God of Pnking, there was a scene in one of Siege books (probably the last issue of Thor) where Balder asks Loki why he does all the idiotic crap that he does, when he must KNOW it's going to end with Thor pounding the snot out of him. And Loki gives this great speech, very flowery, which when boiled down is the Scorpion and the Frog fable. He does, he says in pseudo Middle English, because it's his nature. I thought that was so cool -- not only in really crystallizing just who this character was in just a few words, but also subtly explaining away some of his really lame plans in the past. That stood out for me.

Then they killed him. But still.

* Also, when Heimdall attached Bifrost to Stark Tower, that was pretty cool. But I spoiled the moment for myself by wondering what was on the other end. Isn't Asgard a pile of rubble in Oklahoma? And if it's in Oklahoma, what do you need a dimension-spanning rainbow bridge for? We already have I-40.

* Whatever happened to the Gerrungadungadingdong, the Odin-Spear? The Thunderbolts were fighting over it, but I guess I zoned out at the end.

* Does anybody else feel like a lot of subplots were left unfinished? I expected more resolution.

* In answer to someone's question, I was also curious about the SHRA, and I remember one reference ... to the president overturning it. Which he can't do on OUR Earth, but maybe on Earth-616 he can. Or maybe that was shorthand for Congress passing a unanimous resolution two minutes after the Battle of Asgard and the president getting the credit for signing it. Or something.

* Are they REALLY going to make Spider-Man and Ms. Marvel a sort-of item? Didn't see THAT coming! You know, you look at Peter Parker's love interests over the years, and you simply can NOT consider him a hard-luck Charlie. I know many men who would trade all of their worldly success for Mary Jane OR Ms. Marvel OR Gwen Stacy ... not to mention all three.

* Have I mentioned lately that I really, really hated Sentry: Fallen Sun? I really did.

Still, it was awfully cathartic just to see the Avengers finally kick a little booty.


That may be the 21st Century, geek version of "Other than that, Mrs. Lincoln, how'd you like the play?"


Depends on what you think of the author, I suppose.