I thought it’d be interesting to follow the Adam Strange concept over the years by focusing on one or two stories in each decade of his existence.  Principally, I want to examine what makes him ‘tick’ as a character – what can we get from an Adam Strange story that we couldn’t quite get elsewhere?

Followers of my JLA thread may have noticed that it has paused at the end of issue #19, which was the 2nd of four consecutive fill-in issues by Mark Waid.  The first two of these – comprising the tale of Julian September - was a very original self-contained little tale.  Waid’s second two-parter, however, was much more ‘Waidian’.  It concerned longtime DC slawart Adam Strange, and made much use of the continuity of that character.  In fact, for good or ill, it was all about continuity.

I decided that I couldn’t really comment on the Adam Strange issues of JLA without having some kind of grounding on how the character has been presented over the years.  I could see that such a study would be easier with Strange than with most of his early Silver Age stablemates.  He has been used sparingly since his run in Mystery in Space ended with issue 102 in 1965, and his essential character hasn’t changed much since his first appearance.

Thanks everyone who answered my initial queries regarding the best stories to read.  Due to reprinting gaps I wasn’t able to get my hands on all that I’d have liked to, but I think I have enough to represent each decade.  Some of these stories I am really looking forward to rereading - particularly an appearance by a certain muck-encrusted Earth Elemental.  Many I'll be reading for the first time.  Hopefully we'll make it all the way to Planet Heist, set excitingly in the 21st Century.  How futuristic is that? 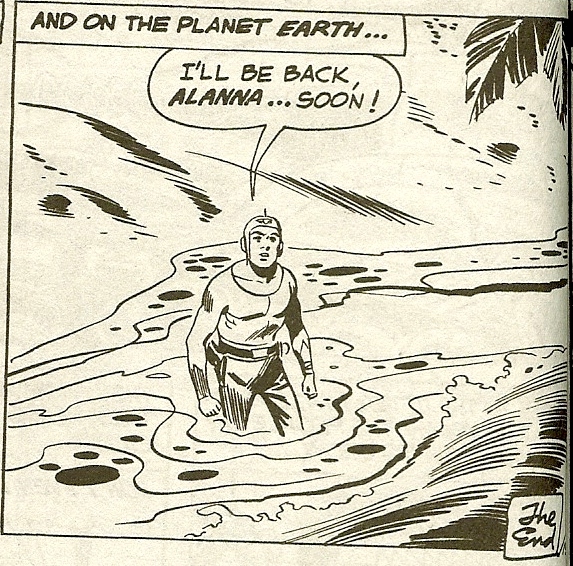 Well, DC got what they arranged to get. I'm sure at the time they thought they were getting the best end of the deal. I have nothing whatever against Conway.

Whenever you want, Figs, I also got Adam's World's Finest, Brave & Bold and Green Lantern appearances, too. And I can dig up those Hawkman Showcases as well when everyone is ready.

Awesome. Thanks for the chronology.

Lee Houston, Junior replied to Steve W's discussion A Cover a Day
"Here's one roller coaster I think my cardiologist would still let me ride, provided I could…"
32 minutes ago

Jeff of Earth-J replied to Jeff of Earth-J's discussion Swamp Thing
"ISSUE #119: Tefé is taken by the "bad man" to her "new home" where…"
1 hour ago

Jeff of Earth-J replied to The Baron's discussion Movies I Have Seen Lately
"OTOH, if Connery had stuck around, Cubby Broccoli might not have tried the "back to…"
1 hour ago

doc photo replied to The Baron's discussion RIP Olivia Newton-John
"My buddies and I were all in love with her back in the Seventies. May she rest in peace."
3 hours ago

Peter Wrexham replied to Steve W's discussion A Cover a Day
"More carousels or merry-go-rounds, showing that what goes around comes around.  Alternatively,…"
3 hours ago