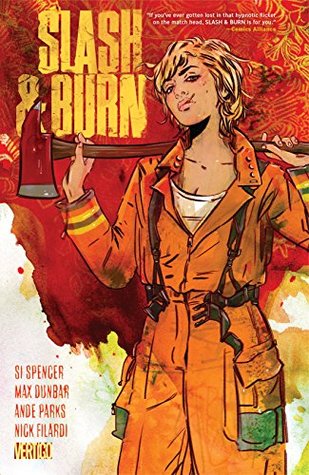 At first this miniseries looks like a cliché: a firefighter who is also a pyromaniac. But it quickly turns into a more complex story about protagonist Rosheen Hayes's past: how she lost her parents, the time she spent in an orphanage with a group of pyromaniacs who called themselves The Sparky Club; and her confusing relationship with the town mayor.

All of these threads are revealed through a series of flashbacks. But the immediate problem is figuring out who is murdering her childhood friends, and why. Like most murder mysteries, Rosheen's investigations lead her down blind alleys, with a surprising final suspect. But it all comes down to the one pulling the strings, and the solution she had already planned.

Rosheen is both a murderer and a pyromaniac. But as the most ethically motivated character she definitely qualifies as an anti-hero, as well as the last person standing at the conclusion. The art team delivers a classic Vertigo look--mostly realistic, with just enough background detail to tell the story--and Spencer has crafted a story that builds to a great conclusion (even if it may be twistier than necessary).