I'm currently reading Adventures on the High Teas: In Search of Middle England by Stuart Maconie. Stuart is a well-known broadcaster and DJ in the UK, and in the book, published in 2009, he sets out to track down and identify the English middle class, their thoughts, characteristics and motivation.  Maconie himself was brought up in in solidly working class town in northern England, so his journey is that of a man seeking to identify something that he isn't. His method is to basically visit and stay at a number of very middle-class towns in England (Buxton, Surbiton, Knutsford, Leamington Spa and others) and contrast them and their residents with his own working class upbringing in a northern town. The result makes for some illuminating reading.  Is there still a class system in England? You betcha... 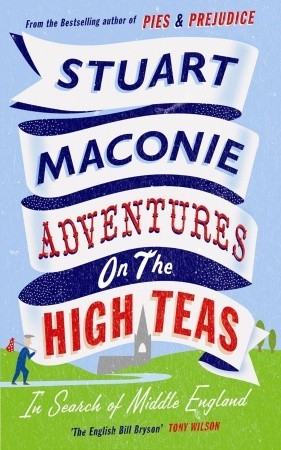 I just realized that the title is "High Teas," not "High Seas." Very clever.

I'm currently reading Adventures on the High Teas: In Search of Middle England by Stuart Maconie.

I'm finally reading Ira Levin's Rosemary's Baby (saw the film, never read the book) and a recent MG graphic novel (but that's another thread) called Beetle and the Hollowbones by Aliza Layne, which is very much an MG aimed at an audience that's not me, but the art is great.

"The Stephen King Horror Library" comprises both Rosemary's Baby and The Haunting of Hill House, which I got for a steal on clearance at HPB a while ago. I haven't read either one yet, but I remember hearing an anecdote about the director of the film Rosemary's Baby. He felt obligated to be authentic, right down to seeking out the exact dress (blue and white checks) that Rosemary wore in a particular scene depicted in the book.

For the past, oh, say 20 years, I've been feeling guilty about the books I have not read since becoming a so-called "adult." SInce being "retired," I started out by throwing myself into a series of books. But reading It Can't Happen Here really messed me up. Since then I've thrown myself into comic books I've never read (such as the complete SA GL), and I don't feel a bit guilty.

If you want something that's well-written and doesn't relate at all to our modern situation, Ira Levin's Rosemary's Baby would be a good choice. The Boys from Brazil by the same author would also fill the bill.

I just finished G. Willow Wilson's Alif the Unseen. Loved it, and here's my Goodreads review:

For once, a book club selection I made! I've been meaning to get to this for awhile. It's a fascinating combination of cyberpunk, fantasy, and a little romance. Set in an unnamed Middle Eastern security state, it tells the story of hacker Alif's resistance efforts. When the state identifies him he must go on the run, with the help of djinn he has met. In the end he foments an Arab Spring-like revolt (which Wilson imagined before it actually happened). Puts a wonderfully human face on Islam in the process, and the djinn are convincingly portrayed as not quite human.

Recently Re-Read In Praise of  Shadows, by Junichiro Tanizaki

Jeff of Earth-J replied to Jeff of Earth-J's discussion Sandman (TV)
"EPISODE 11: Has everyone watched the additional episode that dropped today? It is "Dream of a…"
1 hour ago

Richard Willis replied to ClarkKent_DC's discussion R.I.P. Tom Palmer
"He, Neal Adams and Gene Colon are probably coming up with some great pages."
1 hour ago

Doctor Hmmm? replied to Eric L. Sofer's discussion Are any new books worth it?
"Welcome back, Foges! Afraid I can't help you here. I squander all my $$$ on reprints."
3 hours ago

Doctor Hmmm? replied to ClarkKent_DC's discussion R.I.P. Tom Palmer
"How sad. One of my favorites."
3 hours ago

Tracy of Moon-T replied to Jeff of Earth-J's discussion Dark Shadows
"He's a pompous a*s. He is mean and yells at her, basically grabs her and tosses her around,…"
4 hours ago

Travis Herrick (Modular Mod) replied to ClarkKent_DC's discussion R.I.P. Tom Palmer
"Aw, man, that's too bad. He was one of the first inkers, I recognized. It was always a…"
5 hours ago

Lee Houston, Junior replied to Steve W's discussion A Cover a Day
"Time for more excitement in the "fun" house. (Image courtesy of the Grand Comics…"
5 hours ago

Jeff of Earth-J replied to Jeff of Earth-J's discussion Sandman (TV)
""They make changes for all kinds of reasons..." The combination of issues #9 and #13 into…"
6 hours ago