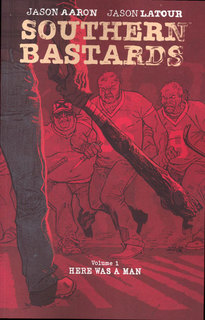 Co-creators Aaron and Latour were both born in the South (although Aaron doesn't live there any more): this series is their way of making peace with the place. Call it a love/hate letter. The cast aren't just any Southerners. They're small town rednecks full of ignorance, hate, and casual violence. Their lives revolve around football and BBQ. In short, they're the negative stereotype that the rest of the county tends to have about Southerners. As Latour's introduction describes them, "The assholes you might think Southerners are. The rednecks we're afraid we might really be."

Earl Tubb has returned to Craw County, Alabama after a long absence. He intends to pack up the family house, talk to a realtor, visit a relative, and be gone in three days. He soon finds himself haunted by memories, and becomes entangled in the troubles of an old friend. Next thing he knows he's standing up for justice with a club in his hand against the petty tyranny of Euless Boss, the high school football coach and major business owner who seems to run the town.

In the four issues collected here we meet a rich cast of characters, and the core conflict is firmly introduced. Earl's conflicts with his father are shown in flashback. Like many before him, he needed to leave so badly that he joined the Army to do it. Upon his return he's still reluctant to call the place home, but he finally does so. It's a story full of BBQ, pie, and lots of beatings--by the last issue it seems like half the characters sport bandages from previous encounters.

All along we see Earl leaving voice mails about the trip. Just when I was ready to assume that the identity of the person being called was going to be a cliffhanger there's an Epilogue with a surprise reveal. Let's just say further complications are hinted at...nicely done.

Continuing with the local color scheme, the "Cover Gallery & Sketchbook" in the back also includes a recipe for fried apple pies by Betty Aaron, Jason's mom.

Permalink Reply by Jason Marconnet (Pint sized mod) on March 11, 2015 at 3:49pm
I'm a fan of this series. I was surprised with Fhe outcome of this arc. The next arc hasn't completed yet but so far so good.

This is a great book, and another hit from Image. I read somewhere online that Image is the HBO of publishers, and I think that is pretty accurate. I can absolutely see this as an HBO series.