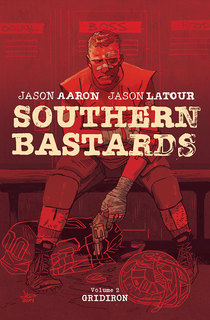 Aaron and Latour achieve the seemingly impossible in this arc: they make Coach Boss a sympathetic character. The story of what it took to take him from the worst football player at Craw County High School to the most powerful and feared man in town is a story of massive family disfunction, nearly superhuman ambition and drive, and an unbelievably corrupt local government. It's hard not to empathize with the boy from the wrong side of the tracks who finds a way to succeed against those odds.

But the cost is high. Only for him at first, but eventually it weighs heavily on the other members of his management team. It's a rich story for only four issues. And a surprising one: the first collection ended with a surprise reveal about Earl Tubb's daughter. Instead of bringing her into the series then, we're left with another teaser at the end of this collection.

The TPB ends with a cover gallery and a sketchbook, many from the French release of the book in Paris.